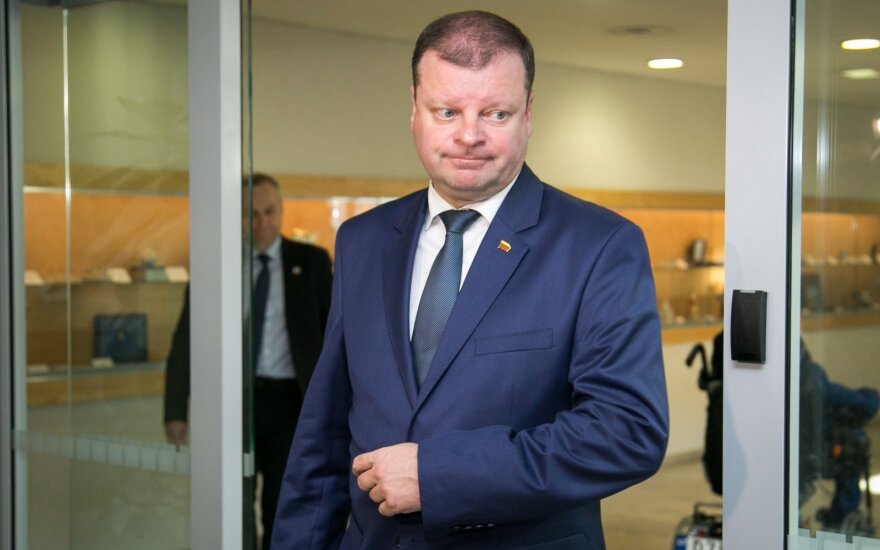 We ourselves glorify emigration, show it as the only solution, focus on success stories, but do not display the dark side of emigration, hence schoolchildren believe that one has to work very hard in Lithuania, while things are simple abroad, Prime Minister Saulius Skvernelis told LRT Radio. In his opinion to handle the situation it is crucial to show people how the country has changed, while just complaints and worries will do nothing to change the situation, LRT.lt writes.

Two prominent recent scandals have been regarding Rūta Vanagaitė's statements that Lithuanian resistance fighter leader Adolfas Ramanauskas-Vanagas was supposedly a KGB agent and that the only way to stop emigration and save Lithuania was for Vladimir Putin to occupy the country, while earlier designer Juozas Statkevičius told the Russian portal Sputnik that nothing will change until the government changes completely, including the president. S. Skvernelis comments that such statements are clearly employed by Lithuania's large neighbour and while he emphasises the importance of freedom of speech, he laments that educated people like this try to interpret historical facts from such a direction. "But we are a democratic state, people expressed their opinion and it is our job to deny the false claims made," he stated.

Related articles
PM off to Finland to meet with Nordic, Baltic counterparts
Military analyst: R. Vanagaitė stands at the forefront of the information war

With a recent survey revealing that a third of schoolchildren in 9-12 grades wish to permanently leave Lithuania, S. Skvernelis states that primarily this is linked to our frame of mind and public discourse glorifying emigration, showing it as the only solution, focusing on success stories, but not revealing the dark side of emigration. This, he believes, makes the teenagers believe that it is hard to earn a living in Lithuania, while it is easy abroad because supposedly they are granted incredible opportunities there.

"You have to work everywhere and you can also earn in Lithuania, particularly including more than the minimum wage. This is why we have to look at the brain washing propaganda and show that emigration is not a good thing and Lithuania has all the necessary conditions to work, earn and live. Of course there are people who will want to leave, gain experience and study. We need not stop or obstruct them because such people return. What is most important is that they study, gain experience and even earn a starting capital before returning to successfully work, create businesses," S. Skvernelis explained.

In terms of displaying success stories in Lithuania, the prime minister highlights the backto.lt project where Lithuanian business representatives travel and show successfully working Lithuanian companies. The head of cabinet believes that it is through such tangible, real matters that people will see how the country has changed and what the actual situation is, instead of through complaints and worries.

The politician admits that the issue of emigration's positive image is not exclusively linked to the media. He highlights that there are real objective reasons why individuals may choose to leave to seek fortune elsewhere. Problems such as social segregation, education quality, social justice and political corruption being important contributors to the difficult situation. Nevertheless S. Skvernelis notes this is not a matter of black and white.

We have to unite both those in Lithuania and abroad. We are working with Lithuanians abroad, their communities, so that enough people gather, attend the referendum. We have to convince people it is needed, that they would not just be participating, but voting for dual citizenship. It is a serious task, most likely we will be able to do it in 2019." S. Skvernelis stated.

The prime minister is departing to Finland tonight, to participate in the Northern and Baltic State summit. He notes that while a wide variety of questions from regional cooperation, to security issues, to UN reform, to transatlantic relations will be discussed, Lithuania is particularly focused on energy security, with talks of Lithuanian electricity network synchronisation being held, the gas markets and other electricity links.

When asked about his idea for Lithuania as part of a currently ongoing project to mark the country's centenary, S. Skvernelis is so far unwilling to reveal what he has in mind. "It would be odd for me if the prime minister, responsible for cabinet work, would begin talking about an idea. We realise ideas thought he cabinet programme. When the time comes and we mark the centenary of statehood, it will be possible to express what I hope for, what I wish for the future," he stated, noting that the other ideas for Lithuania are excellent and it is good they exist, but it is one thing to express an idea, another is to realise the idea.

PM off to Finland to meet with Nordic, Baltic counterparts

Prime Minister Saulius Skvernelis is on Tuesday leaving for Finland to take part in an annual...

Wednesday marks 25 years since the adoption of Lithuania's main law, the Constitution .

Lightning keeps striking all year, will the villager start crossing himself?

Leaders of the ruling Lithuanian Farmers and Greens Union (LFGU) have downplayed the fact that the...