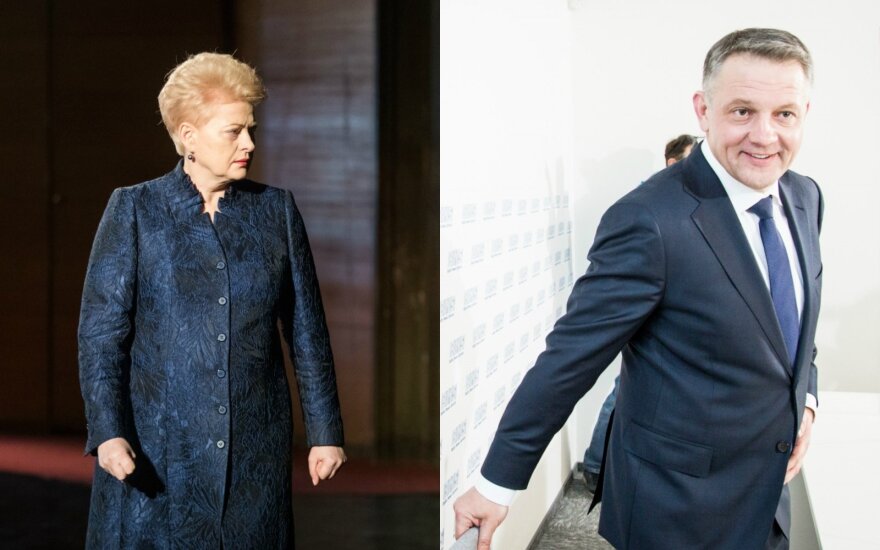 Former Liberal Movement leader Eligijus Masiulis, who is a suspect in the MG Baltic corruption case, publication of correspondence with President Dalia Grybauskaitė could be harmful to Lithuania, Seimas Legal Affairs Committee deputy chairman Stasys Šedbaras of the Conservatives says. According to him, if the final verdict in the case does not suit the suspects, the publication of the case material could be used against the state in the European Court of Human Rights, lrt.lt writes.

"Farmer" group member, Seimas Legal Affairs Committee chairwoman Agnė Širinskienė told LRT Radio that it will be decided next week, what exactly the Seimas will investigate and what shape this investigation will take. According to the MP, the largest concern is due to the head of state potentially influencing the news media.

"As you know, information surfaced in public that the president corresponded with MP E. Masiulis. Certain directives were passed along via the aforementioned. These directives were addressed to Mr. Raimondas Kurlianskis, the head of MG Baltic. A part of the directives is, as it was revealed, linked with the restriction of the freedom of press. The freedom of press is a constitutional principle," A. Širinskienė stated.

She explains that from the public sphere it can be seen that there was not just correspondence, but also certain actions: "Say when on December 15, 2015 the president directed E. Masiulis to move the guard dog, that is to say journalist Dapkus, already on the 16th (the day after the letter), a conversation is recorded by the Special Investigation Service (STT) between E. Masiulis and R. Kurlianskis, where they not only discuss Liberal Movement financing, but also where greetings are passed along from, ostensibly, the president, using practically the same vocabulary as used in the letter."

A. Širinskienė claims that all this information is available in public and that the public must receive answers on questions regarding politicians' potential influence on the news media, as well as the appointment of the police prosecutor general.

"One matter is the influence on Lithuanian news media, the question of restrictions on the freedom of press. The independence of news media and its freedom is a constitutional principle. Another element is the potential influence of the MG Baltic group in the appointment of the prosecutor general and certain actions by the president, requesting assistance from the group in this question," the MP says.

When asked where the letters are to be obtained from, A. Širinskienė states that during the pre-trial investigation, the material was taken from E. Masiulis' computer, thus the letters should be available at the prosecutors.

"Another matter is that there are certain indirect proof, such as when after the correspondence we observe the member of Seimas' actions, where he goes and coordinates questions, which were discussed in the letters. Equally also from the public sphere, we can observe Mr. Kurlianskis' actions, him trying to influence members of Seimas [...]. The actual form of investigation is being discussed in Seimas. I believe that we will have a decision on it next week," A. Širinskienė said.

Seimas Legal Affairs Committee deputy chairman, Stasys Šedbaras of the Conservatives meanwhile views the correspondence as an effort to politicise the corruption case.

"One important issue, which worries me as a jurist, is that all this from the case, from a political corruption case [...]. Any attempt to politicise this case, which is already in the courts, could be used against the state of Lithuania at the European Court of Human rights if the ruling is unfavourable to all or some of the suspects," S. Šedbaras accents.

According to him, there have been such cases in both civil and criminal cases where the representative – Lithuania – suffered because politicians commented on case material in public. "The continuing discussion is after all directly linked to the case, with pre-trial investigation material. [...] I am most concerned that such actions would not threaten the successful conclusion of the case," S. Šedbaras says.

"I believe it is normal – if I have presented a project, I can discuss it, speak to the representatives of parliamentary groups. If we single out E. Masiulis' case, then we clearly link the correspondence with only the political corruption case and clearly threaten it on a legal basis. Where else could you obtain material? I do not even know and am almost certain that there will be no other material. Only an uproar will be raised, which will be detrimental, rather than beneficial in any way," S. Šedbaras comments.

Analyst Ričardas Savukynas is of a similar mind. In his opinion, most of the reactions to the correspondence are emotional and obstruct an objective evaluation. According to the analyst, correspondence between politicians is a normal practice.

"It would be exactly abnormal if there was no correspondence because the head of state is doing her job. She is working with MPs, ministers and so on. It is a normal political process where various actions and decisions are discussed and coordinated," R. Savukynas says.

In his opinion, the correspondence also does not reveal any efforts by D. Grybauskaitė to influence the news media. According to the analyst, instead the president's efforts to prevent the influence of MB Baltic in the appointment of the prosecutor general can be seen.

"The interpretations are rather confused because it suffices to read the letter and you can see there was no coordination and that there is exactly a statement that such influence will not be tolerated. This matter is more or less clear. The interpretations are causing some sort of noise," R. Savukynas says.

He also adds that in this situation, the statements of certain politicians are concerning. The analyst points to a statement by the chairman of the Lithuanian Farmer and Greens Union Ramūnas Karbauskis, where the MP declared that the letters of other MPs would be investigated.

"It would appear that R. Karbauskis doesn't even know how data security is ensured in Lithuania and that it can only be performed by specific law enforcement agencies, that the Seimas cannot do such things. Regardless of this, we hear such things, which inch toward article 198 of the Penal Code [illegal interception and exploitation of electronic data]. Such talks are peculiar to me. I believe that some sort of political noise is being created in a clear field," R. Savukynas noted.