Media Briefing
aA
There is too great a concentration of Swedish banks in Lithuania, thus one of them should be sold. This was a statement by Seimas Budget and Finance Committee chairman Stasys Jakeliūnas on Wednesday. SEB bank and Swedbank – these are namely two Swedish capital banks operating in Lithuania and other Baltic states and if they didn’t flinch, they must have at least been listening carefully, this was a statement by a politician from the ruling coalition. 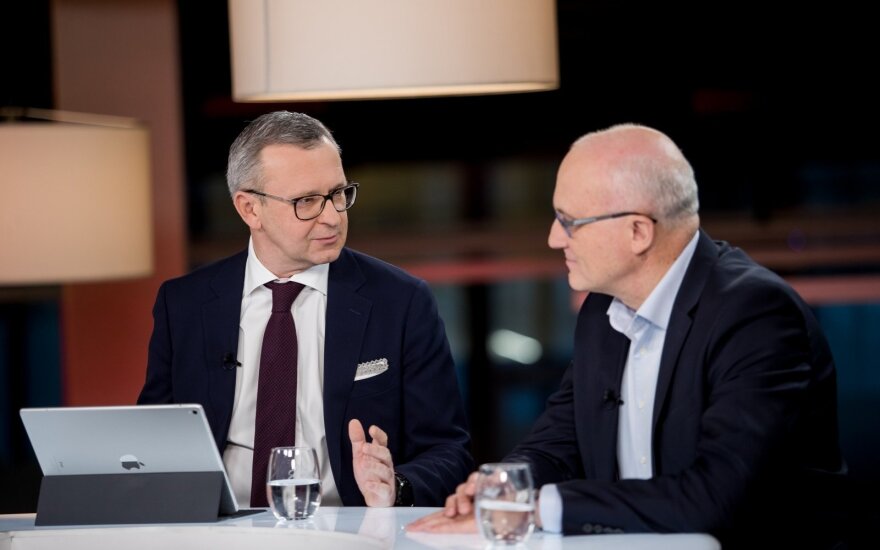 What message is being sent to investors and what would attempts to regulate, what businesses and to whom should be transferred by foreign capital, do to the Lithuanian economy? This was the discussion topic of LRT's Dienos Tema, featuring S. Jakeliūnas of the Lithuanian Farmer and Greens Union (LVŽS) and Association of Lithuanian Banks president Mantas Zalatorius.

S. Jakeliūnas explains that his statement is an echo of one from a Swedish parliamentary investigation in 2010, also repeated by the head of the Swedish central bank during a visit in Lithuania. The politician states says that banks, Swedish ones included, caused a crisis in the Baltic States, did not take responsibility and acted both irresponsibly and riskily, with lack of oversight in both Sweden and Lithuania. Thus, he notes, to reduce risks, it is necessary to have a lower concentration of banks from one country.

M. Zalatorius finds that the statement by S. Jakeliūnas opposes free market and overall economic principles. The president of the banking association explains that such a statement sends an unambiguous message to both Lithuanian citizens and foreign investors, during a time when both the Lithuanian government and Bank of Lithuania seek to draw in foreign investment into the finance sector.

"First of all, I would like to say that decisions on property purchase and sale in a free and democratic society, which I believe Lithuania is, are made by business owners or shareholders. It matters not, what it is – a flat, a car or a bank," M. Zalatorius responded, emphasising that the pursuit of investment has been a position expressed by both Prime Minister Saulius Skvernelis and LVŽS leader Ramūnas Karbauskis.

While S. Jakeliūnas emphasises that he only seeks to initiate discussion that could help to avoid a similar crisis as occurred before during the financial crisis, M. Zalatorius wonders, just what sort of discussion it is that the politician seeks, "I do not understand, what discussion your words could lead. Do you seek to cause panic in the markets? Or deter new and existing investors? What is the goal of such a discussion? We can start and have this discussion, which we often do under completely civilised conditions in the same Budget and Finance Committee." The bank association head notes that he has already received a number of phone calls with inquiries, what exactly has happened for such statements to be made.

S. Jakeliūnas returns to a statement made by Martin Andersen, the head of the Swedish Finance Inspectorate, on February 2, 2010, quoting the latter as stating, "The same mistakes are being made in the Baltic States as were in Sweden during the crisis. Sweden would have benefitted if foreign banks had taken a part of the credit market." Nevertheless, M. Zalatorius notes that this is a quote from ten years ago and the situation is now very different, with the banking sector being much more localised and balanced now.

When questioned, whether his failure to be hired at a Swedish capital bank at a point in the past may have a role in his opinion on the presence of Swedish banks in Lithuania, S. Jakeliūnas dismisses the concept completely, claiming that his work has been much more interesting than anything that could be found in the banking sector. At the same time, he lashes out against G. Nausėda, once again bringing up how he believes it unimaginable that, for example in Sweden, an economist from a bank would run for president.

Crisis is not around corner but slowdown signs are visible, Lithuanian central banker says

I. Makaraitytė. Pit of hot coals for Gitanas Nausėda – the silent majority, which is against gay rights

A. Januška: G. Nausėda has a risk that could be used by S. Skvernelis

Ingrida Šimonytė and Gitanas Nausėda have decided to participate in the presidential elections....