BNS
aA
Hundreds of Russians living in Lithuania on Sunday voted in the Russian presidential elections, which were triumphant to the country's incumbent President Vladimir Putin. 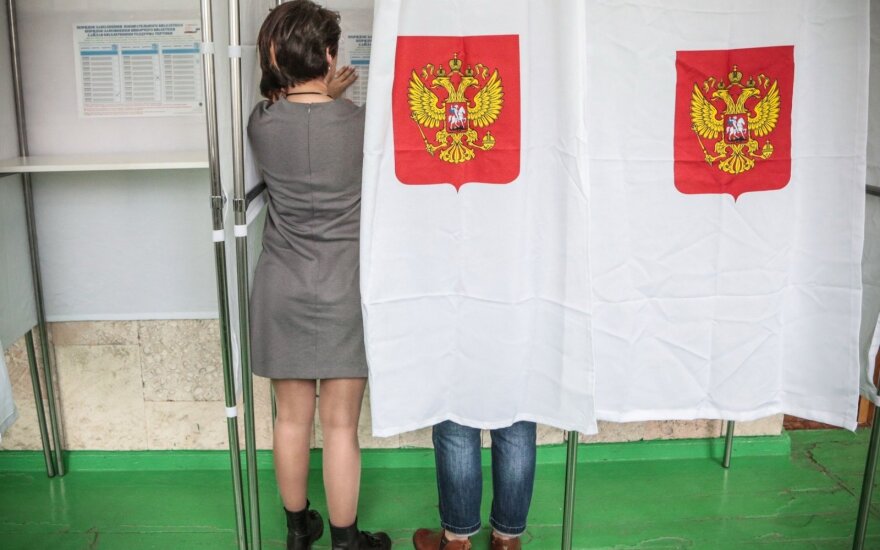 Polling stations were located in five cities of Lithuania, namely, at the Russian Embassy in Vilnius, the Park Inn Hotel in Kaunas, the consulate general in Klaipėda, the Santarvės Gymnasium in Šiauliai and the Draugystė Cultural Center in Visaginas.

The polling station at the Russian Embassy was guarded by the police and security guards, ordering all visitors to pass via a metal detector. Russian citizens voting in Lithuania were welcomed by Ambassador Alexander Udaltsov.

"The elections are very intensive but successful. According to information available to us, around 750 people cast their ballots by noon, which his more than during the parliamentary elections of the fall of 2016. Clearly, the presidential elections interest the voters, however, this was to be expected, as presidential elections always involve a higher voter turnout," the diplomat told BNS on Sunday.

In Udaltsov's words, Russian citizens on a vacation in, for instance, Druskininkai or Palanga, also had an opportunity to arrive in polling stations in Lithuania. The crew of Moscow Vakhtangov Theater and singer Philipp Kirkorov on a tour in Lithuania cast their ballots at the Russian Embassy.

Liudmila Maksakova, actress of the Vakhtangov Theater, refused to reveal the candidate the supported, also giving a cautious comment on her expectations for the winner of the presidential race.

"As all people, I expect peace and well-being,” Maksakova told journalists at the embassy.

Most of the Russian citizens told BNS their votes went to support Putin.

Valery Gorbachev, 72, said all of his friends also voted for the current Russian leader.

"For Putin. He is the most worthy candidate among those who are participating in the election. I and my friends – we all vote for Putin," said the man.

Vasily Ilyin, 68, also confirmed that the current president was the only candidate that deserves attention.

During the Russian parliamentary elections held in September of 2016, just over 2,000 people cast ballots in Lithuania.

R. Valatka on Russia: it is idiotic to be a large North Korea in the 21st century