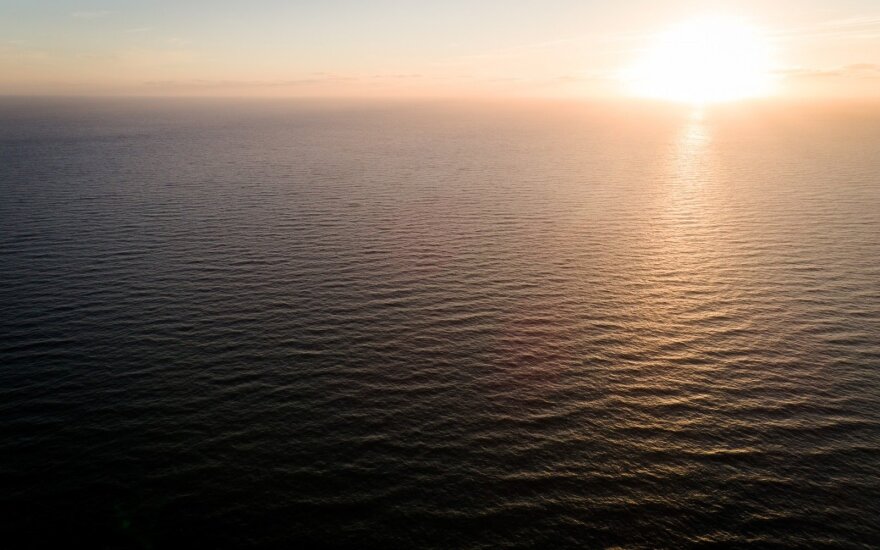 With Russia declaring its intent to expand mineral surveying in the Baltic Sea next to Kaliningrad Oblast, Lithuanian specialists worry that the sea may become further polluted due to this, while politicians associate such aims with the neighbouring country's geopolitical goals, lzinios.lt writes.

"There is a vast untapped reserve of valuable minerals at the bottom of the sea. Some of them may even be excavated without constructing mines," he stated. The governor did not conceal that he was speaking about iron and magnesium secretion (naturally occurring clumps), which are simply lying on the Baltic seafloor and just need to be picked up.

According to A. Alikhanov, by harvesting the iron and magnesium secretions, it would be possible to accumulate capital for further investigations of the Baltic seafloor and the construction of ships needed for such a task.

At the moment, in Russian Baltic Sea territory near Kaliningrad Oblast and the Lithuanian border, the Russian company Lukoil has been pumping oil in the sea. It has been doing so since 2004. The largest oil fields were discovered in the D6 oil field, some 22 kilometres West from the Curonian spit and around 5 kilometres from the Lithuanian – Russian border.

This year, pumping in the oil field D41 was begun. It is 3 kilometres East from Kulikov village, which is near Kaliningrad city and some 70 kilometres away from the Lithuanian border. Lukoil plans to begin oil pumping in a total of four Baltic Sea areas in 2020. All the extracted oil is of especially high quality, while the pumping capacities are not high, thus it is exported – it is difficult and not economically beneficial to construct a small capacity refinery locally or transport the oil to Russia for refining.

It is believed that there is much oil on the Baltic seafloor near Lithuanian shores – it could be that there is around 80 million tonnes of oil, of which 20-30 million could be realistically harvested – significantly more than on the shore. The Poles and Latvians have taken interest, following the Russians and have now begun oil prospecting.

Thus, Lithuanian geologists were not surprised by the Kaliningrad Oblast government's intentions to intensify the exploitation of Baltic Sea resources, going beyond oil.

According to the Lithuanian Geological Service Engineering Geology Department chief specialist dr. Aldona Damušytė, there is certainly more to be found beneath the Baltic than just sand, silt, amber, oil and gas, there is iron and magnesium to be found as well. However, specific surveying has not been done, thus it is impossible to say, which natural resources are plentiful and which are just occasionally observed.

"More iron and magnesium has been found in the Northwest Baltic Sea. However, special geological investigations are needed to find out the exact amount. Thus, Russia's intention to uncover, how much of this resource can be found in Russia's territory, is more the country's political game than economic necessity. I do not believe that the discovered amounts would have any industrial significance," the scientist told Lietuvos Žinios.

According to her, there is much more of a different mineral resource – sand, but even its amounts are not known for certain, geological prospecting has not been done. More surveying for sand has been only done near Juodkrantė, the sand was then used to restore the beaches of Palanga. Oil deposits were also examined with more scrutiny.

Environmentalists have been saying for years now that the Baltic Sea is one of the most polluted in the world. However, as Lithuanian Geological Service representative A. Damušyė noted, this is not due to oil pumping in the Baltic. According to her, even Kaliningrad uses the most modern and reliable technologies for oil pumping. "The Baltic Sea near the Kaliningrad area is far more polluted with oil products by the Russian military navy," she emphasised.

Marine Protection Agency Marine Environment Evaluation Department head Aistė Kubiliūtė told Lietuvos Žinios that with increased mineral extraction from the Baltic Seafloor, secondary pollution in the Baltic Sea could increase. "Already in some areas of the Baltic Sea, we are seeing increased pollution, especially near industrial regions," she said.

According to A. Kubiliūtė, when developing any activities in the Baltic Sea, it must not be forgotten that ther are containers with hazardous materials lying at the bottom. They were dumped at the end of the Second World War. In such areas, increased amounts of arsenic and other toxic materials have been found. According to some scientists, if these toxic materials enter the water, it would cause an ecologic catastrophe and it would take the sea decades to cleanse itself, perhaps taking half a century.

"The potential pollution depends on the seafloor composition. There is sand nearer to the shore, pollutants do not accumulate there, but in deeper areas of the Baltic Sea, there is organic material, which is inclined to accumulate pollutants," A. Kubiliūtė explained.

Russia aims to develop mineral harvesting in the Baltic Sea are not just an economic matter, but also have a geopolitical subtext, Seimas National Security and Defence Committee member Laurynas Kasčiūnas says.

"For a time now, the independence of Kaliningrad Oblast has been reinforced. They are seeking resources in order to gain energy independence. This is a goal they have been heading toward for ten years now, with the Baltic States preparing to synchronise their electrical supply system with the West," L. Kasčiūnas stated. He emphasised that this is why it is being sought for Kaliningrad to become not only a military outpost, but also an energy independent part of Russia.

According to the MP, it is very important not to miss Russian efforts to explore Baltic Sea resources because a part of it could be in Lithuanian territorial waters. Thus, there could be proposals to cooperate in harvesting, also in resolving environmental issues. This could be exploited for various ends.

"I believe that Russian efforts to expand natural resource surveying and harvesting in the Baltic Sea could become a new threat, which should not be disregarded," L. Kasčiūnas noted.

A group of NATO ships are searching for explosives left over from World War One and World War Two in...

The project for the synchronization of the Baltic power grids with the Continental European system...

After Poland has closed beaches along its Baltic Sea coast due to a toxic algae bloom, experts say...