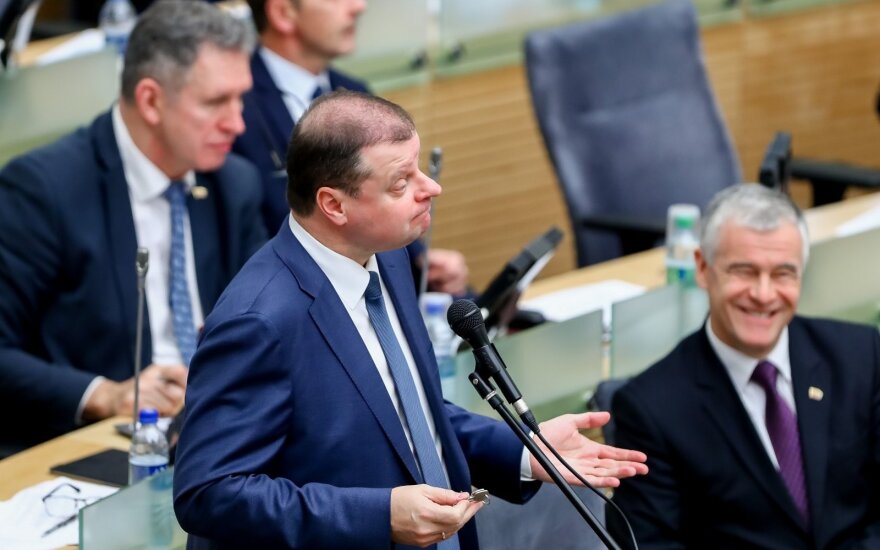 The head of a cabinet that slept for a year looked at his reclining ratings and decided – we will now do real changes – tax and pension, state service and education, forest and fields. Because this suicidal nation wishes to live in a time of change.

The desire for change gradually cemented itself in voters' heads when watching the hopeless inability of the 2012-2016 cabinet of Algirdas Butkevičius to at least pretend to understand how provincial fire-fighters or museum curators' families survived when daily necessity prices rose daily after implementing the euro. That desire for change lingered in the air in towns that lost from a third to half their residents, that were left without bank branches, schools and police stations, lingered together with the odour of plastic packaging being burnt in fireplaces and outhouses that had not seen cleaning in decades.

By some incomprehensible means, a dozen major landowners and a dozen people from Saulius Skvernelis' environment united, calling themselves Farmer-Greens, managed to convince 274 thousand 108 voters that it is namely them that are the political power which brings change. This was enough for the LVŽS to become the victors of the elections because in the second round its candidates were chosen as the lesser evil by all who dreamed nightmares of a Conservative return to power.

A year later S. Skvernelis and his ministers, still not become the objects of universal mockery along the lines of Aurelijus Veryga, remembered they should do something. At least so that in the 2019 municipal, presidential and European Parliament elections they would not be wiped out as having failed the voters' expectations.

However any changes or their imitation may also not necessarily match most of the public's imagination of how Lithuania should change.

Public sector and state employees hope that the changes will manifest in pay raises of not just 2-3 percent, but at least 2-3 fold. However they are completely unprepared for at least a third of them losing their jobs and having to seek employment in private business where they will actually have to work. As for the rest there will be a larger workload and constant pressure through measurements of their work efficiency. If you want to imagine what resistance this could lead to, you only need to consider the intentions of the movement Už Lietuvos Miškus [For Lithuanian Forests] to stop the merger of forestries into a single company.

Education reform has yet to begin, however here the interests of municipalities ruling emptying schools, interested in keeping the jobs of loyal school director, who have yet to drunkenly drive of somewhere and that of the ministry which seeks to save funds for raising educators' wages by optimising the education institution network. And at such a time it turns out that the university which prepared most current teachers, the Lithuanian University of Educational Sciences, is working so great that according to the Centre for Quality Assessment in Higher Education "it creates the basis to strip the permit to conduct studies and activities related to studies". Just don't try, dear schoolchildren, to tell this in your teachers' faces, what their diploma are worth – let Minister Jurgita Petrauskienė do it for you.

The most important electoral group is of course the retirees, thus their expectations that someday pension growth will race ahead of the prices being rewritten in shopping malls nearly every day the "Farmers" will attempt to fulfil by destroying the second stage pension accumulation system. However the 2% Sodra payments which now reach our accounts in pension funds will allow to grant current retirees just 20 euro per month according to Minister of Social Security and Labour Linas Kukuraitis.

The practicing Catholic minister no doubt remembers the miracle performed by Jesus, multiplying bread and fish. However to hope himself that the 186 million euro per year which is taken from future retirees and is to feed the hungry current retirees will multiply may not be the most rational reform strategy. The most likely result of such a reform is the unfulfilled hopes of retirees and several hundred thousand angry tax payers.

Up to total catastrophe this cabinet need only begin pubic discussions about automobile and real estate taxes. It will turn out that the majority of the supporters for these taxes hope that it will be someone else who will pay them. The drivers of old Passats and rusty Golfs imagine that it will be the buyers of luxurious new cars that will be taxed, while the latter – that the tax is linked with pollution and will remove smoking rust-buckets from the roads. If it will be everyone that will have to pay, then everyone will be left greatly angered and the most active will rush to organise wheeled protests on Facebook.

After all we only like such reforms where it is someone else that suffers, while we receive tangible and easily calculable benefits. People who take instant credits hand over their savings to phone frauds and try to create a better tomorrow by buying lottery tickets – this is who elected our current government. But this is no curse because even the most competent cabinet cannot come up with such reform which would fundamentally change such voters' lives. Because it never happens so that all participants win the grand prize in the lottery.