Roma, the vagabonds of the Grand Duchy of Lithuania

Jonas Drungilas | ldkistorija.lt
aA
Gypsies originated in Indian Peninsula and left their native lands in the Middle Ages after choosing nomadic way of life. In the 15th century, their traces are already evident in Central Europe and it is likely that they reached the territory of Lithuania at about the same time. It is thought that the Great Duke of Lithuania Aleksandras granted Gypsies the privilege in 1501 allowing them to roam all over the Grand Duchy of Lithuania. Moving from one place to another they would earn they daily bread through the trade of wizardry and, forced by deprivation and poverty, eventually got involved in the inglorious “craft”, stealing. This is why the image of Gypsies in Lithuania has gradually diminished to persons involved in magic and horse stealing. 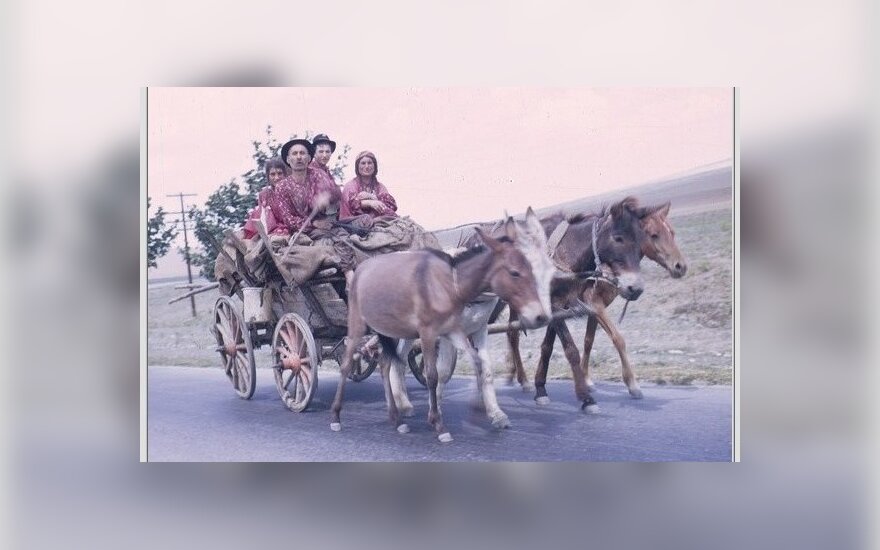 A hospitable country for vagabonds

Gypsies roaming the GDL enjoyed a somewhat less strict legislation and solutions compared to those who lived in Western Europe or in neighbouring Poland, where people would urge to expel Gypsies. On the contrary, the Second Statute of Lithuania (1566) says that Gypsies who are unwilling to leave the country may settle down in lands owned by aristocrats and the nobility. In other words, the nomads were granted the right to establish themselves by becoming settled people. The provision proved ineffective after some time, though, and the authorities introduced tougher control. The Third Statute of Lithuania (1588) forbade peasants to provide shelter to Gypsies, therefore Lithuanian peasants and Gypsies lived in peace.

Related articles
The 1655 Union of Kėdainiai: from Poland to Sweden
The development of the Lukiškės suburb during the Grand Duchy of Lithuania  (1)

The office of the "Gypsy king" that first emerged in the 17th century is yet another specific detail in the history of Gypsies in Lithuania. Only a nobleman was eligible for the office through the appointment by the royal chancellery. It was not a coincidence that the office was introduced, because authorities did their best to collect more taxes from Gypsies and to better control their communities (hordes) that roamed the territory of the Polish and Lithuanian Commonwealth.

Historical sources provide us a number of names of the "Gypsy kings": Motiejus Korelevičius was appointed in 1652, Jonas Navrotinskis followed in 1668, Jonas Deltuviškis took the office in 1703. There are about 18 known "kings" from the period between 1647 and 1780. In order to boost tax collection even further, Bonaventūra Jonas Viera, the new "king" appointed in 1705, was granted the privilege of choosing assistant tax collectors on his own.

Since the 18th century, packs of Gypsies were more and more often seen in the estates of Lithuanian aristocrats where they were kept as a kind of theatre performance or an entertainment. Lithuanian nobles initiated the introduction of yet another office for the nomadic communities, the head of Gypsies, usually occupied by a Gypsy. A number of Gypsy communities lived at that time in the lands that belonged to the ducal family of Radvila, because they were tolerant towards Gypsies. Karolis Stanislovas Radvila appointed Jonas Marcinkevičius, a Gypsy and a well-off city resident, the "king" of local Gypsies in 1778.

In addition to helping Radvila collect taxes, Marcinkevičius was also able to lift his patron's mood and to entertain him. A number of nice stories have survived about that joyous "king". Here is Marcinkevičius' description: "He wore a crown-like cap on his head. (...) A short peacock feather was stuck into it. He wore long black clothes reaching his heels and girdled with a black belt. He wore red boots and a chain made of large white beads hanging on his neck and breast. A medallion was attached to that chain depicting a bear and a monkey wearing red shirt and sitting on the bear. Wishing to please the Most Gracious Duke (Radvila) and to show that he is his humble servant, the king of Gypsies taught several bears how to pull the chariot. The duke liked that very much. The Gypsy was coachman of the six bears, while the monkey was his lackey..."

Gypsies had a one more famous head of their community in the second half of the 18th century – Jokūbas Znamerovskis born in Lida powiat. Although originally he was not a Gypsy, he maintained close ties with Gypsies: he spoke their language fluently, knew their customs and was involved in horse trade. Znamerovskis was a fun-loving man, his face adorned with huge black moustache that accentuated his Asiatic features. He earned respect among Gypsies through courage. Stanisław August Poniatowski appointed him head of all Gypsies of the GDL in 1780.

Even though he roamed together with Gypsies, he had his residence in the small town of Eišiškės. It must be said that he had conflicts with Gypsies on the grounds of abuse of personal power. He was punished according to the Gypsy custom and ruled Gypsies justly ever since. Znamerovskis died in 1795, when the situation in the state was undergoing profound changes. Gypsies began a new chapter of their history in the Russian Empire where the rules of living were harsher than those in the Polish and Lithuanian Commonwealth.

The 1655 Union of Kėdainiai: from Poland to Sweden

Because of Moscow’s aggression against the Polish and Lithuanian Commonwealth that started in 1654,...

Lithuanian and Polish ethnic territories did not have a common border in the Middle Ages because they...

Scouts and guides in medieval Lithuania

Life in the Baltic lands in the middle ages was full of dangers. In the 13th century, the old...

The romantic attitude towards the pagan Lithuania, shaped in the 19th century, remains tenacious up to...