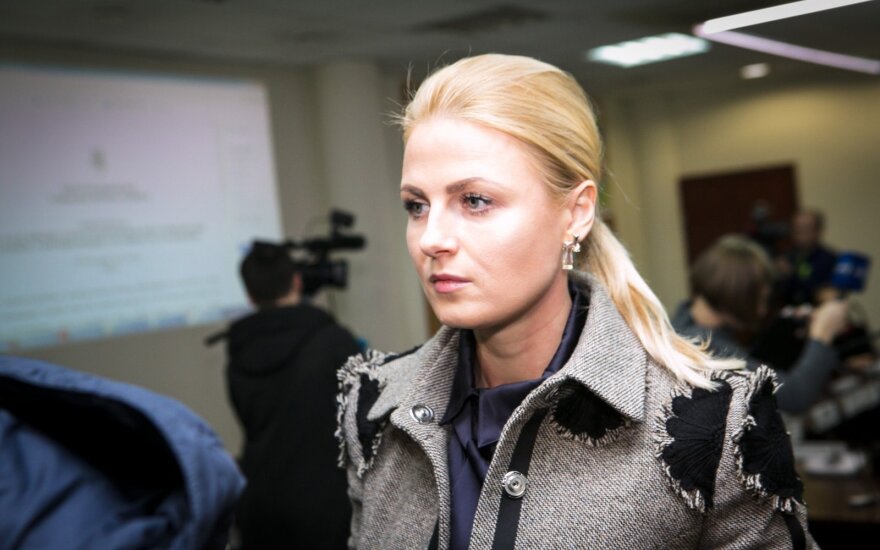 With the scandal, which began following a meeting last week between Lithuanian Farmer and Greens Union (LVŽS) leader Ramūnas Karbauskis and former member of Seimas Greta Kildišienė at a public relations agency, gaining momentum, the "Farmer" ranks are already wondering – who could most benefit from such a situation?

Nonpartisan LVŽS Seimas group member Povilas Urbšys poured oil into the fire, stating soon after the meeting that by not explaining his relations with G. Kildišienė, the LVŽS leader is making both himself and his the LVŽS he leads vulnerable.

Related articles
Opposition against Karbauskis among the “Farmers”?
R. Karbauskis has to withdraw

Soon talks spread among the "Farmers" that this way P. Urbšys, once held a close companion of R. Karbauskis, is seeking personal gains by diminishing confidence in the party leader.

Such rumours gained further momentum due to public statements from politicians from Panevėžys claiming that P. Urbšys could have long known of the links between R. Karbauskis and G. Kildišienė, but did not reveal them.

"P. Urbšys himself is from Panevėžys and knew everything perfectly well of G. Kildišienė's matters long before the Seimas elections. He knew more than others, but this did not prevent him from making use of the "Farmer" wave to win the elections. Now he dons a righteous mask and attempts to save himself from a boat that is being sunk by Ramūnas Karbauskis himself. How long can you manipulate people's trust and goodwill?" Conservative Rasa Juknevičienė questioned on Facebook.

This was echoed to Delfi by Panevėžys council member, former LVŽS representative Gema Umbrasienė, removed from the party at R. Karbauskis' initiative. "This whole story and the changes in G. Kildišienė's life were known to the people of Panevėžys already from early 2015. It was known to P. Urbšys and it was known to B. Matelis. It was beneficial to them because obviously R. Karbauskis was headed to success in the elections with large financing and they made use of it, taking photos with G. Kildišienė," she said.

"Farmers" unwilling to speak up, but someone is benefitting

G. Umbrasienė stated she is certain that the recent story with G. Kildišienė is not the last that will spring up on R. Karbauskis. "I am certain this will not be the end of it because R. Karbauskis, I believe, views this situation as a personal war and he cannot lose personal wars, he can only win them. I have a bad feeling that we will return to these stories a number of times more," the Panevėžys politician noted.

Nevertheless she expressed doubt that G. Kildišienė is being used to push R. Karbauskis out of various posts. She linked this situation with personal interests of certain politicians.

"Back in early 2015, when the successfully operating Panevėžys branch was dismantled at the initiative of P. Urbšys and R. Karbauskis, with each having their own goals, everyone quoted R. Karbauskis' position and no-one granted us the right to a response. I objectively believe that at the time there was some sort of numbness because R. Karbauskis was financing Naisių Vasara, the Naisiai Festival, everything was excellent, while on the other side, P. Urbšys contributed as a fighter against corruption and no-one ever stopped to wonder that people saying such lofty words and performing such lofty actions could be simply lying. But if the situation had been investigated back then, how and under what circumstances the branch was dismantled, trust me, today Lithuanian political life would feature far fewer scandals and problems because eyes would have likely been opened back then," G. Umbrasienė said.

According to her, already then, when in 2015, after a successful showing in the municipal council elections, the Panevėžys branch was dismantled because its leaders refused to obey R. Karbauskis' urging to remove Mantas Leliukas, information on who's supposedly concerning actions was handed over by P. Urbšys to the LVŽS leader and G. Umbrasienė, who stood up for M. Leliukas, the party members chose loyalty to the wealthy leader above the truth.

"I want to say that a wealthy, chairman in possession of major finances is a boon to any party because major politics cost a great deal. Even in 2015 the branches were surprised over such a situation, supported us, but when the choice had to be made, whether to remain alongside the wealthy chairman or fight for the truth, they gradually went silent. And now what? It is not the branches who are benefitting from the success in the Seimas elections, but those who have already obtained a certain political significance and are beginning to realise that these scandals are beginning to harm specifically their political future," the Panevėžys politician noted.

She explained that even after withdrawing from the party, she continues to stay in touch with "Farmers" in the regions. "Certainly many are discontent, many are angry, but what can they do? All the party congresses, council meetings are at least for the most part based on R. Karbauskis' monologue, at the accompaniment of Bronis Ropė and Rima Baškienė. Everyone else is left to just grumble because by standing up more, you will have to come to terms with losing a significant part of your financing, financial support during elections and you will be unable to achieve anything during the municipal elections," the former "Farmer" explained.

G. Umbrasienė assured that P. Urbšys apparently benefitted from not noticing the real situation in Panevėžys. "When I am asked why P. Urbšys, who saw everything, acted one way then and otherwise now, I answer that then it was beneficial to not notice certain things and now it is beneficial to notice it. Everyone choses in their own benefit," G. Umbrasienė explained.

Nonpartisan Seimas LVŽS group member P. Urbšys assured Delfi that talks that he supposedly may have known R. Karbauskis and G. Kildišienė's story, but chose to remain silent in pursuit of benefits, is completely untrue.

"I have not made use of a single cent from the LVŽS for my electoral campaign, unlike Bronius Matelis. I did not use the "Farmer" logo in my promotional material, nor the images of R. Karbauskis or Saulius Skvernelis, unlike B. Matelis. If we are to talk who I was beneficial to, I will not hide that I was certainly interested that people would have an alternative choice in the elections, that a list was made, based on not party affiliation, but competence and values, that a power would enter, which could resolve the people's problems and would do so with transparency," he stressed.

The politician assured he did not know earlier that R. Karbauskis and G. Kildišienė's relations may be exceptional. "Yes, since the conflictual situation in the Panevėžys branch (in 2015) occurred because G. Kildišienė accepted responsibility back then, I saw the party chairman's interest that the branch would grow stronger. It could be seen that he greatly trusts G. Kildišienė. But when the question of the jeep (the car which turned out to be rented by G. Kildišienė's mother from R. Karbauskis' Agrokoncernas and was used by her daughter on entering parliament) arose, R. Karbauskis personally assured me that everything is in order and there is nothing suspect to it," P. Urbšys said.

While speaking of the current situation he repeated that by not presenting clear cut answers, R. Karbauskis is left vulnerable due to links with G. Kildišienė. "It is clear how he is dismissed as a political leader and as a person. But that this is done in order to make use of it and usurp his position, I personally do not know who could seek this.

From my own perspective, I can only say that I will never seek such a position in the party because I have been and will remain nonpartisan. Especially because I am the leader of a civic movement in Panevėžys," he stated.

Nevertheless, P. Urbšys noted he has heard, though this could be rumours spread by G. Kildišienė's entourage, that he is critical of her. "Supposedly she is a rising star in the Panevėžys political sphere, while I am interested of plucking the star from the sky because in the upcoming municipal council elections she could supposedly form serious competition against the list of public figures I recommend. I view this as a sort of phobia because my participation in the LVŽS project is linked to only one desire – for the people to have an alternative and that it would be people working who could cut the Gordian knots formed out of personal interest. Thus personally I react sensitively to attempts to cover personal problems with party interests," the veteran member of Seimas stressed.

According to him, it is concerning that the LVŽS leader has still not clearly stated that G. Kildišienė will not return to politics "under the umbrella of the LVŽS." "Secondly, now that the meeting between R. Karbauskis and G. Kildišienė has garnered so much media attention and now they are trying to shield the meeting with party interests, it appears to me that it is beginning to harm not just the leader, but also the party itself. This weakens us and our opportunities to accomplish our pledges to the people. Even more so – we could lose our moral authority and this would be the greatest loss. We could not then demand moral transparency from others if we apply double standards to ourselves," P. Urbšys said.

That the return of G. Kildišienė to political life under LVŽS banners would not leave party members happy is expressed by other "Farmer" representatives as well.

Delfi sources suggest that most likely this will be discussed in the party council meeting to be held on Saturday in R. Karbauskis' patroned Naisiai, while the question of the party leader and G. Kildišienė's stories are to be discussed during a Wednesday afternoon party and Seimas group meeting at Seimas Speaker Viktoras Pranckietis'.

As Delfi was told by LVŽS vice chairman, member of Seimas Virginijus Sinkevičius, it will be possible to provide further comment on the situation after the Saturday meeting in Naisiai. Nevertheless, when asked whether party members would agree if G. Kildišienė expressed a wish to return to active political life, he said that the LVŽS council could have varied opinions, but personally he does not see such a possibility.

"To any elections (he would not see any opportunity for G. Kildišienė to enter alongside the LVŽS). Not the municipal, nor the European Parliament. The latter institution is important because let us not forget – there you represent not just the LVŽS, but all of Lithuania. Thus I believe that we would likely want to be represented by our best, strongest politicians in the European Parliament," he said.