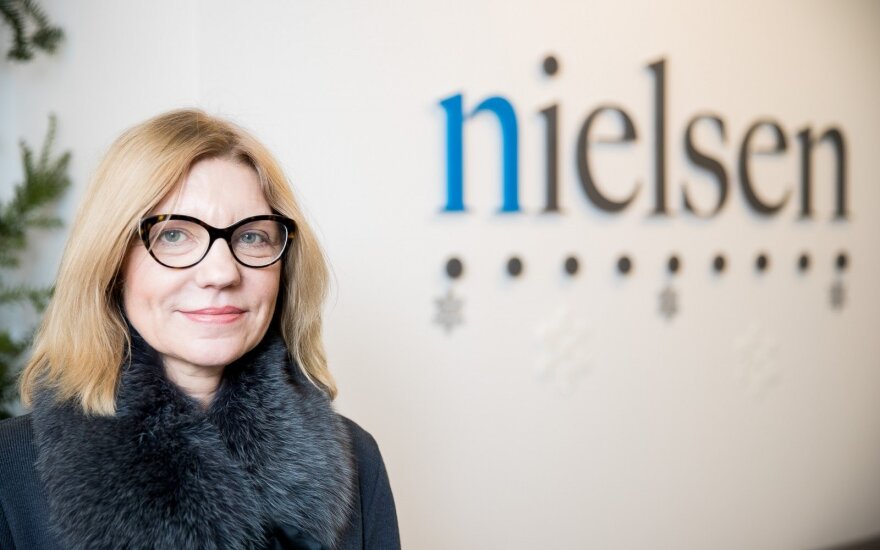 Prices have indeed risen in stores, quite significantly for certain goods. This has made buyers purchase less and seek discounts more. Furthermore the growing prices are identified by Lithuanians as their greatest concern.

This was revealed by data from the research company Nielsen, which was discussed by Nielsen general director for the Baltics Ilona Lepp at the Lithuanian Producers and Suppliers Conference.

I. Lepp revealed that while we complain about rising goods prices, we go to stores particularly often, mostly for shopping large amounts.

"We go shopping 20 times a month, almost like how we go to work every month," I. Lepp quipped.

She outlined how the prices and consumption of certain goods shifted over the past 10 months.

"We can see that the consumption of light alcohol decreased the most, we consumed 13% less of it, but we paid 10% more for it," she said.

The research data also reveals that dairy products are consumed 5.9% less in 2017 as compared to 2016 though we spent 2.7% more for it, processed meat and fish has been consumed 3.3% more, but the price for it has been 7.6% higher. Meanwhile 6.6% less pasta and flour has been consumed, while paying 4.7% less.

"Basketball and retailing are likely the two areas that Lithuanians can speak at length about. It was interesting whether prices really rose that much and indeed they did, I will show what rose the most. It is likely unsurprising that alcohol prices rose the most and quite significantly – more than a fifth. We can see that butter and margarine are "attached" to all this alcohol for some reason," she said.

According to Nielsen data, the prices of alcoholic cocktails, cider, beer, vermouth, wine, butter and margarine rose by more than 20%.

"Sour cream, vodka and condoms rose in price. In other terms I cannot tell you the logic, why it was specifically the prices of these goods that rose, perhaps the producers could tell you, but these are the sales prices we see. And of course this impacts consumption, we earn less though wages are growing, but with this sort of price increases, we won't dig up any money," she quipped.

Nevertheless certain prices decreased: "There are categories where sales prices decreased, not everything is all bad. These are detergent, shoe cleaning materials, there aren't many of them, but they exist."

With prices rising, 54% of survey respondents stated they were changing their habits to save.

Increasingly many people set aside some savings. During Q3 this year, 39% put away for savings, while during the same period last year – 33%, a fifth of respondents do not have spare funds.

"A fifth said that they eat, dress, pay taxes, perhaps go somewhere and that's it, no more money is left, while those who do have funds left do not toss money left and right," she said.

"We see that from 2013 we were "hooked" on healthcare fanatically, caring not about economics, nor prices. Well, prices mattered, but this began only from Q4 2016," she said.

Meanwhile Latvians identify health as their main concern, while price increases are only a little more important than utility prices, which have always been a relevant problem for Latvians.

Rising food prices are also a major concern for Latvians, surpassing concerns over health and economics there.

Perhaps it is due to rising prices that Lithuanians are such keen bargain hunters.

"Almost 70% of buyers are gamblers, they seek, they want discounts. But we see that currently only a small number, just 13% change their retailer for bargains. For now it is in other countries, say Denmark where some 40% are inclined to swap, while it is not so much with us. Perhaps because one has to travel to them, perhaps parking causes problems, perhaps queues," Ilona Lepp mused.

It turns out that 66% of Lithuanians are bargain hunters, while 34% are loyal to brands. They state that discounts do not change the choice of good purchased and they only buy the discounted brand when the brand suits them.

However only Latvians, Russians, Hungarians, Portuguese, Czechs and Slovaks are greater bargain hunters, who can confidently wear the silver medal for discounts hunting.

In Q2 2017 an entire 41% of all sales in Lithuania was for discount goods. Mostly buyers pursued discounts in purchases of alcoholic beverages, household goods and only then – food.

It turns out that Lithuanian origin is particularly important in food choice.

84% of respondents would rather choose Lithuanian dairy, while foreign ones – only 54%, almost half of Lithuanians want to eat Lithuanian ice cream, while a third would opt for foreign ones.

"However we do not have much trust in industrial goods from Lithuania. I am not saying that this applies to all categories, but Lithuanians believe that non-food product global brands are of higher quality.

This is similar to Russia. Let me tell a joke. I lived in Moscow, I remember the times when patriotism there was insane.

In one children's store Russian production was swept away from the shelves and a sort of island was built with shoes, towels, cookies and sweets and there was a sign hung there – "Made in Russia." But the retailers had to dismantle the hill because no-one bought anything. There is a thought process that Russians can make milk and rockets, but certainly not shoes," she laughed.

53% of respondents stated that local goods brands fit all their personal needs, desires and tastes. 51% stated that global brands are of higher quality.

Overall a whole third states that they do not care if the brand is local or global, they buy whatever is cheaper.

Lithuania's excise duty on diesel fuel will rise next January and a hike in the tax on tobacco...

The Lithuanian parliament voted on Tuesday to keep a reduced 9 percent VAT rate on district heating in...

Lithuania must save for future amid growing economy - Minister of Finance

Lithuania formed a surplus 2018 state budget for the first time since regaining independence in...