Rimvydas Valatka
aA
Research cornered Kepenis, anti-vaxxers and everyone, who met with antivaxxers on the street, shops and elsewhere. Bed and cards – even Guoga was left empty. Presidential ratings press on Nausėda. But the celebrations of those supporting Šimonytė, who has closed in on Nausėda, may also be premature. 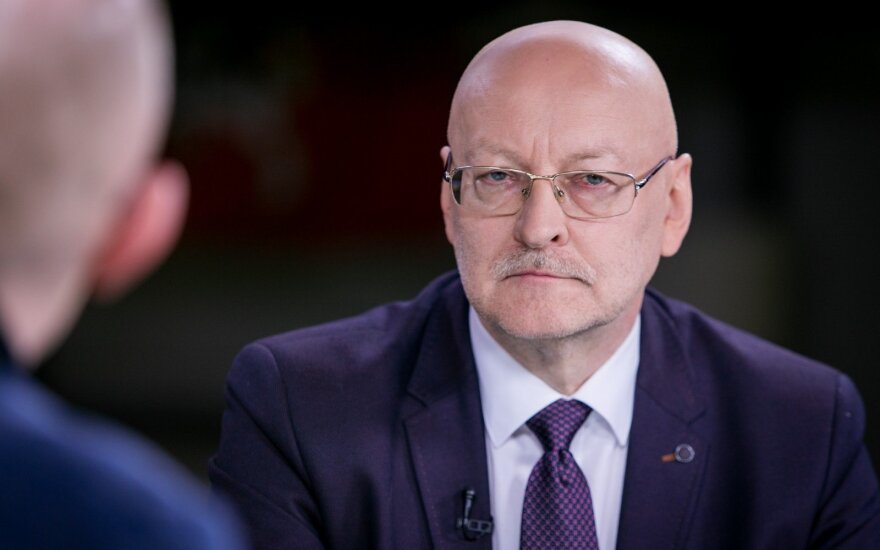 Based on the latest Vilmorus survey, the presidential race triangle is turning into a single point. If we are to consider the potential error margin. 23.5 – 22 – 18.4, this could easily turn into 21.3 each. Or turn out into something else altogether.

Second, this survey was essentially the first truly presidential one. In earlier ones, their organisers would somehow include all sorts of matijošaitis-es, ušackas-es and other unknown candidate ingredients and in sociology it is the same as replacing carrots in soup with chilli peppers.

Both the surveys and the soup would become unusable as per their original purpose.

Now let's briefly imagine that Šimonytė had upheld her original promise to not run for president and overall leave politics.

How would the presidential triangle look then?

Correct – there would be none. It would look like Nausėda is firmly leading with more than 40% and Skvernelis is struggling in second like a cart filled with dung and 18.4% rating atop it all dragged by the half-dead Naisiai horse. Nausėda would comfortably win the first round.

But then the second round would come and under the roar of the "Farmers'" apocalyptic trumpets about Swedish banks turned mites on the people's bodies, it would turn out that Skvernelis wins by a small margin. He would gather all the votes remaining from Andriukaitis, Juozaitis, Puteikis, Mazuronis, Tomaševskis, Puidokas and others left beyond the comma.

The government pyramid would be crushingly conquered for at least a year and a half. And with having your own president for this long, one who can "silence that person", you can do so that the Naisiai would steady themselves and would perhaps catch a second wind. People are only people – they catch the direction of a strong wind quick.

A year and a half is aplenty to take the LRT, Constitutional Court, Constitution and all sorts of government critics. After that, it's all simple – who can attack, why those 2% GDP for defence and overall, why not be friends with Putin?

Thus, thank God that Šimonytė decided to run for president.

Šimonytė's mission is to defeat Karbauskis Agrokoncernas' rental candidate. Beat him already in the first round. Namely the first. The mission is to save Lithuania from yet another limited and pompous individual at the office of the head of state. Lithuania had enough with just Paksas, who, how surprising, brought Skvernelis to politics.

Šimonytė has a truly historic mission in front of her. To protect Lithuania from Karbauskis' government pyramid. In which all would be controlled by an angry and limited pusher of unclean Russian fertiliser, who for a year and a half has allowed himself not to answer a single one of journalist Jakilaitis' 24 questions about his relations with Russian fertiliser.

Could Skvernelis, as prime minister, have answered these questions? No doubt. Though it could have cost him his office. Should presidential candidate Skvernelis force Karbauskis to at least do it now or answer instead of him, questions of particular importance to Lithuanian national security?

He must. It is more important than spewing nonsense, how if Minsk's Batka [Alexander Lukashenko] could turn Astravyets into a gas-powered plant at the request of Naisiai. 24 questions fall equally on the prime minister as they do on Karbauskis. Why does he remain silent? Because 1. The office is Skvernelis' Father, Son and Holy Ghost; 2. Both of them are the same.

If Skvernelis wins, Lithuania will be just like that – without answers to important questions posed to the government. Or if more accurately, in such a Lithuania, gradually no one will have any questions left.

Šimonytė's mission is not just historic. It is a tragic mission – to defeat Skvernelis, but not win the election. Why so harsh?

You could say Šimonytė does not have concealed voters. In essence, she will receive all of her votes in the first round. If she enters the second, the best she could expect is the meagre 2.3% currently lying with Auštrevičius.

Of course, where there are human beings, things happen. You could also believe that those, who back Andriukaitis, Juozaitis, Puteikis, Tomaševskis and Puidokas could also change their vote to Šimonytė. But illusions are probably not the best companion in politics, right?

This is especially true when the "Farmers", squealing like collective farm swine unfed for three days, will scream for two weeks for their own to vote for Nausėda if he is up against Šimonytė in the second round. Not because Nausėda is at all farmer-like. Just that the word "conservative" is akin to a red napkin to a bull in the Corrida.

It is paradoxical, but more successful performances by Andriukaitis, Juozaitis, Puteikis, Mazuronis, Puidokas and even Tomaševskis in the first round would be fortunate for Lithuania. All these figures would also contribute to Šimonytė's historic mission. If she enters the second round alongside Nausėda. Specifically Nausėda.

Sad news. If, of course, you consider that this is not some radio station electing the country's best boss, but that we are electing the leader of an EU member state, which keeps stumbling here and there.

Will Lithuania manage to once again squeeze through the eye of the needle like a camel?

Or perhaps Šimonytė's mission is impossible? We will be cornered by the "Farmers" just the same as anti-vaxxers with their malignant refusal to vaccinate have cornered their country and their close ones.