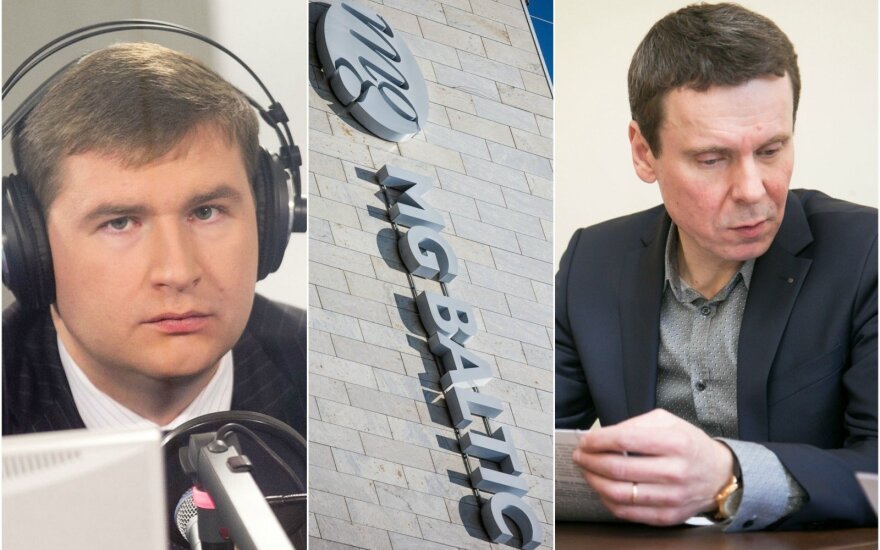 The State Security Department (VSD) report for the Seimas National Security and Defence Committee (NSGK) raised a number of new questions: who knew about the information present there and what did they do with it, how legally was the information gathered and where in the text is it gossip and where – fact?

These are questions posed by analyst Rimvydas Valatka. He recommends taking a pause and carefully reviewing the content of the report.

According to the analyst, classified reports are notable for it being possible to interpret them, as you will.

"State governance through reports is namely dangerous in that it casts a shadow on everyone – both those who have truly erred and those, who are unrelated. Reports give much room for interpretations," R. Valatka said.

The analyst also questions, why the reports were "tossed out" only now and whether they mean that there will be corruption investigations and whether the main figures described in them, such as journalist Tomas Dapkus, are suspects.

"How the reports will be evaluated depends on the degree of decadence in the person and their preparedness to read reports. There is truly a great deal of grey goo," R. Valatka said.

Where was it for all these years?

The analyst also wonders, why the VSD and everyone else, who knew of this information, remained silent regarding this for so long.

"If all that is written here is either true or close to it, then concealing those facts for so long is a crime. The VSD would have presented those reports to someone – the president, prime minister or NSGK chairperson, thus the question arises, why the hell did they stay silent then? Why was there no prevention?" R. Valatka questioned.

He stated that as a citizen he would want such questions to also be answered at a time when such reports surface.

"Because when a naked report is presented, we all begin interpreting and thinking: "Oh, I don't like this person, so it's great, look he's a villain." But if there were answers from the VSD to these questions I raised just now, then the number of interpretations would be limited to a degree.

It would be clear that information was presented to one or other president, but the president told to shove it all in a drawer and not bother people. Then we could understand, why there was silence for so many years," R. Valatka said.

According to the analyst, the report speaks of a period between 2005 and 2014. "During the time so many terms and leaders changed," R. Valatka noted.

The VSD presents an annual national security threat report to the public and this specific report was not brought up there. According to the analyst, the public should know about real threats.

"But I would want for the important details to be presented, so that gossip would be separated from fact. And now in this report I am reading, in some places it is rumours and elsewhere there are facts. Good man, separate fact from fiction," R. Valatka said.

Guilty without a court verdict

When reading the released material, the analyst mused that such figures as T. Dapkus were not only monitored, but their phone calls were wiretapped and text messages intercepted.

"The first question in a democratic state should be whether this was sanctioned. Was this legally obtained? I believe that it may not have always been legal because say G. Kirkilas was prime minister. If we are listening in to a prime minister's conversations, then whose couldn't we listen in to?" R. Valatka said.

According to the analyst, if these individuals were monitored illegally, then it could turn into an even greater scandal than that contained in the report.

"Only courts can establish the truth, whether a person is guilty. Such reports are, in principle, laying down a verdict with no court process. Those in the report can now say whatever they will, but none will believe them," R. Valatka said.

Lawyer Giedrius Danėlius, who is also a defence attorney for former MG Baltic VP Raimondas Kurlianskis, states that in order to evaluate the legality of the VSD's actions, it is necessary to find out more about how the process proceeded.

"In 2006 one law was applicable. In 2013, it changed and operational actions were split into two parts – intelligence and criminal intelligence.

Criminal intelligence is oriented into uncovering criminal actions and it cannot last long. The law outlines that certain measures cannot be applied in excess of one year. Without seeing the report or on what basis the information was gathered it would be very problematic to discern, whether it was legal," G. Danėlius said.

According to the lawyer, in order to monitor individuals, the VSD needs a court permit.

"The Constitution outlines that an individual's private life is untouchable and intervention into private life can only be done with a court permit. Whether it is done by the vSD under the remit of the intelligence law or any other intelligence subject, in any case it is necessary to have a court permit for wiretapping," G. Danėlius said.

"The VSD does not perform pre-trial investigations, thus the information was handed over to them," the service's head wrote.

According to her, the VSD declassified a part of the intelligence information and presented it to the NSGK because such was the NSGK's request in an effort to provide greater transparency to the public. The information was also presented to state leaders.

"No one persecutes journalists in Lithuania. However, if individuals are suspected of criminal activities, the VSD always hands over information on them to pre-trial investigation institutions," A. Katkuvienė wrote.

As Delfi wrote earlier, on December 21, 2017, law enforcement declared the pre-trial investigation over one of the largest business groups in Lithuania MG Baltic and two parties – the Liberal Movement and Labour Party being involved in political corruption was concluded.

Yesterday Delfi succeeded in obtaining a copy of the VSD letter to the NSGK. From it, it surfaces that currently the MG Baltic group, which is embroiled in a political corruption investigation, in an effort to ensure financial gain and personal influence prepared a development strategy already in 2002, to implement which, politicians, state officials and officers were to be employed.

"Considering the scale of MG Baltic representatives' actions we can view it as destructive activities, which can destabilise the state fabric and democratic political system, leading to a threat to national security," the report states.

Lithuanian Prime Minister Saulius Skvernelis says that he sees no sense in opening a probe regarding...

Lithuanian Prime Minister Saulius Skvernelis will seek that the entire material of a parliamentary...

Inga Larionovaitė will be in charge of the news service and news integration at Lithuania's public...

The publication of intelligence information on the MG Baltic business group's influence on political...