(3)
Daiva Repečkaitė in Strasbourg
aA
Policymakers increasingly admit that Europe’s refugee relocation mechanism is stalling – countries like Lithuania feel it first-hand. Lithuania's participation has not started on a high note – the only family (four persons) relocated under the mechanism is already suing the country for granting legal protection rather than refugee status. 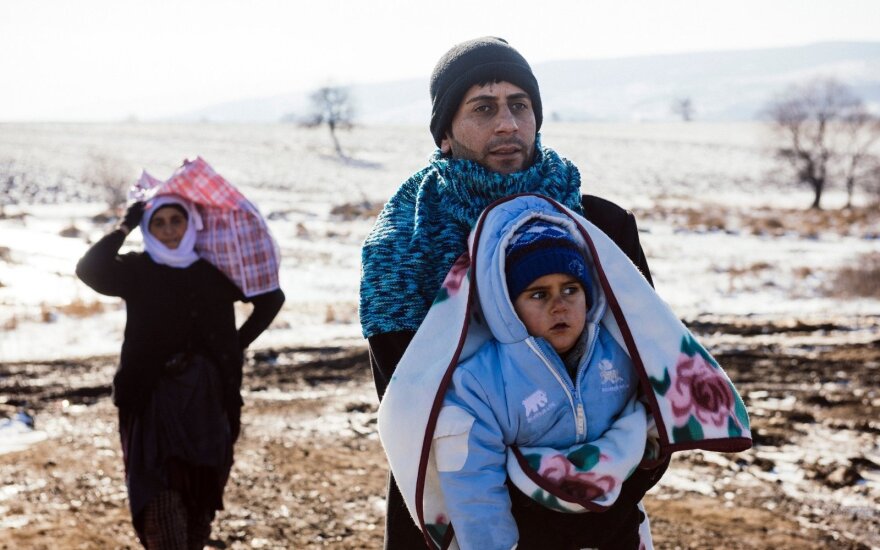 This means that if the Lithuanian authorities decided that the family no longer faced threats in their own country, they could be sent back. It also means that they cannot benefit from family reunification.

No specific plans have been announced to relocate more asylum seekers to Lithuania, and officials are citing a low response rate among asylum seekers who are offered the option. However, Professor Daniel Thym of the University of Konstanz in Germany suggests that current legislation does not require prioritizing the will of asylum-seekers over other concerns.

“The Geneva convention is about not being returned to the country where you face a well-founded fear of persecution. It is not about living where you want to live. But the problem is of course to implement it against the wish of people,” he told the Lithuania Tribune.

In May, the European Commission adopted an agenda to relocate 160,000 people from the member states most affected by the refugee crisis and pledged a €1.7 billion budget increase for measures to tackle the crisis. Lithuania has fulfilled most of its commitments under the EU's crisis response mechanism. The commitments included appointing a national contact point and liaison officers in Italy and Greece – two countries which are the most affected by the crisis.

Lithuania made 40 places available for relocation, but so far only four of them have been taken up. Finland has been the most active participant in the relocation mechanism, transferring 111 asylum-seekers in total, filling the majority of the 150 places made available. Resettlement quotas were set by taking into account the countries' population size, unemployment rate and past numbers of asylum-seekers.

In the meantime, EU institutions are debating how to change the relocation mechanism. “If country A has fulfilled its quota, then we would move [asylum-seekers] to the next country. We sought a binding mechanism for relocation,” said Kashetu Kyenge of the socialist and democrat bloc of the European Parliament, who co-presented a report on the issue at an extraordinary meeting of the Committee on Civil Liberties, Justice and Home Affairs of the parliament.

This binding approach would change the current legislation, since under the Dublin agreement, the country of the asylum-seekers’ first entry must process the case and decide whether to grant asylum.

“Right of asylum is a right – any attempt by member states to reject migrants and to not give them a possibility to apply for asylum should be punished,” Kyenge said at an extraordinary meeting of the committee on Monday.

The report suggested that preferences of asylum-seekers should be taken into account as much as possible in the relocation mechanism. It also called for opening legal migration channels to the EU to ease the burden on the asylum system.

The EU's actions must contain measures for disrupting activities of criminal networks, with specific means to track and confiscate their profit, said Roberta Metsola (European People's Party), who also co-presented the report. Among the means proposed are humanitarian visas and migration hotspots, which should prevent so many people from entrusting their lives to traffickers.

“That report is really correct in saying that we need a holistic approach to address different problems, but if you do everything, at the end of the day you do nothing. So you need to prioritize, you need to decide what to do first and second. That is a part of the problem, and this is where the political divisions come in,” Professor Thym said.

The European Parliament is now expecting political groups to send suggestions for the planned measures. Lithuania is planning to oppose any permanent binding relocation mechanisms.

However, Dutch prime minister Mark Rutte said on Wednesday: "We need to kill this idea that a refugee decides which country to go to. The EU should decide – you go to Lithuania, to Germany or to the Netherlands."

The Dutch are currently holding the EU presidency and this position was supported by European Commission President Jean Claude Junker.

"Refugees want to decide where they want to go, and that's simply unacceptable," he said.

Of the Lithuanian MEPs, Valdemar Tomaševski (Electoral Action of Poles in Lithuania (LLRA), committee member) and Vilija Blinkevičiūtė (Social Democratic Party, substitute member) belong to the Committee on Civil Liberties, Justice and Home Affairs but they have not expressed their opinion on the report of their committee.

The author's reporting trip to Strasbourg was paid by the European Parliament Information Office.

What Lithuanians really think about immigration (2)

Lithuanian residents would prefer to receive immigrants of the same ethnic group or race with barely...