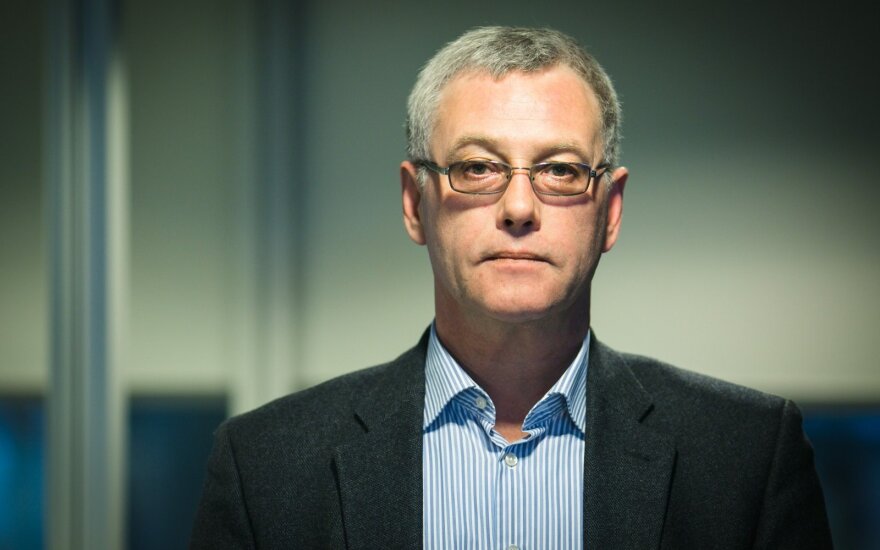 They were also reprinted in Lithuanian media. The conversations featured discussions on the possibility to hand over the Orlen oil processing plant in Mažeikiai to Russia.

According to R. Sikorski, "I want to teach those Lithuanians, so they don't think that sh***ing on Poland will not cost them." And it would appear that the new Lithuanian government re-educated itself.

Already in autumn 2016 S. Skvernelis unexpectedly appeared in Warsaw. In a released photo he is standing together with the head of the Polish Law and Justice Party Jaroslaw Kaczynski in a restaurant in the capital of Poland.

Related articles
Polish ambassador in Vilnius: Consultations in progress on Lietuvos Geležinkeliai case
S. Skvernelis – I’ve received no complaints from either J. Kaczynski or B. Szydlo

It was specifically then, Polish portal fakt.pl states, that Orlen Lietuva was agreed upon. The results appeared in July 2017 when Lietuvos Geležinkeliai signed an agreement where the Poles were granted discounts and a long standing dispute over rail freight tariffs, which prior cabinets were unwilling to touch, was ended.

Nevertheless the most interesting question in this story is who exactly organised S. Skvernelis' first visit to Warsaw in late 2016? Looking at the photo where S. Skvernelis and J. Kaczynski are posing together at a Warsaw restaurant, we see Polish Senate deputy chairman Adam Bielan and according to the fakt.pl analyst, "the Lithuanian prime minister's advisor, formerly excellent basketball player Tomas Pačėsas."

The image certainly does feature T. Pačėsas. We know that he is not S. Skvernelis' advisor, but certainly a famous basketball player who played in Lithuania and represented it. Furthermore he has actively participated in the activities of the VTB United League since it was founded.

This league which is called international and has been the main Russian basketball league since 2014, was founded by Sergei Ivanov in 2008, who also became its president. He is a close companion of Vladimir Putin, also the former Russian Security Council secretary, minister of defence, first vice prime minister and the head of V. Putin's administration. T. Pačėsas also worked as the basketball leagues' executive director.

I would rather not be overly suspicious, however it is hard to believe that working in such offices in Russia and today watching such "cleanliness" in Russian sports, it would be possible to leave office without commitments. T. Pačėsas' presence as the former "left" hand of S. Ivanov in the picture shows that the famous basketball player has dived deep into the midst of the whirlpool of Lithuanian-Polish relations.

In and of itself the relations between the Lithuanian PM and the head of the neighbouring country is laudable.

However it would appear that the Lithuanian PM is stepping on the same rake. The presence of an intermediary, any intermediary, can be harmful to both countries. Since the beginning of independence, Lithuania knows at least a few stories of such informal intermediaries, which did not end without scandal.

The participation of the new Borisov – Pačėsas – in confidential meetings and mediation in resolving economic, (geo)political questions is a potential problem of not just corruption, but also national security.

T. Pačėsas does not have a permit to work with classified information, he is not officially registered as a lobbysit. The meeting, even if informal, between the most influential Lithuanian and Polish politicians is not public because we do not know its contents.

That said, we do see the meeting's results. There can be no doubt that in order to contain a rising problem, respective state services should review the pro memoria of meetings where T. Pačėsas participated, he and the involved politicians should be questioned, this including from the opposition, which he actively interacted with.

Meanwhile recently Orlen Lietuva in Mažeikiai has "unexpectedly" met with fortune. Furthermore beyond receiving discounts from Lietuvos Geležinkeliai, the oil concern dove into the electricity business.

In an informal coalition with the Kaunas Combined Heat and Power Plant, whose owners only recently were still linked with the Russian Gazprom, have become the winners of the state owned Lithuanian electrical power transfer network operator Litgrid competition for tertiary power reseves, having pushed aside the state owned Lietuvos Energija.

While Orlen Lietuva has not paid the state their public interest equivalent service tax, with changes to the aforementioned competition's conditions, the oil concern was able to not only participate in the ocmpetition, but even become one of its winners!

Some Lithuanian politicians have already criticised the situation as scandalous. It would appear that the Seimas Anti-Corruption Commission has also taken an interest in the matter.

Furthermore in this case the VSD and STT should especially carefully monitor the Seimas amendment history, particularly its "anti-lobbyists", these have been parliamentary deliberations on a legislative project involving companies of strategic import to national security.

Amendments were discussed in Seimas which would grant the state the right to influence contracts, transfers and shareholder composition of companies which have significance to Lithuanian national security. There can be no doubt that this would particularly touch upon the Rosatom contracts for the closer of Ignalina [nuclear power plant] and the Achema contracts with Gazprom. "This legislation would form the conditions for Lithuania, state institutions to evaluate <...> companies on the basis of national security interests," energy vice minister Simonas Šatūnas said.

It is good that at least the leadership of the Ministry of Energy is for now standing by a position reflecting Lithuanian national interests and is not yielding to pressure.

Amendments to this legislation have been floating around in the ministries for a long time and only now, with the cabinet's presentation, are pushing their way into the Seimas.

Since Orlen Lietuva is a company of strategic significance to Lithuania, it would also be covered by the regulations from these amendments. Perhaps it may appear insulting to the Polish side, but Lithuania must have at least the right to know, in case the scenario discussed by R. Sikorski came to pass.

Regardless, if problems arise – there are official international channels to discuss such disputes. It is pathetic that another road is chosen and a well-paid PR and lobbying campaign with the participation of the intermediary (intermediaries) for Orlen Lietuva and Achema (with or without their knowledge?) begins against the amendments.

Amendments potentially reflecting the lobbyists' interests may already have been presented at the Seimas Economics Committee this week. You will be surprised who presented them. One of them was presented by former chairman of the Economics Committee, the youngest minister Virginijus Sinkevičius. His amendment formally opposes the cabinet's position. The minister should answer publically, whether he had met T. Pačėsas regarding this question?

The other author of the amendments is a representative of the opposition Conservative party, who should answer the same question.

Questioning T. Pačėsas could also bring more clarity to these and other stories.

The problems of Achema in the context of Lithuanian national security demand at least further discussion, it is worth to at least briefly ask several questions:

1) Is it true and why when the European Commission performed the investigation of abuses in the market, Achema presented the opinion that the price of gas from Gazprom was fair?

2) Under what goal, if not the aim to reduce the significance of the LNG terminal, was the daughter company Achema Gas Trade founded this year?

3) To what end did the German registered fertiliser company Agro Baltic register as a gas market company?

4) Is it true that Achema can sign a long term take or pay gas supply contract with Gazprom?

5) Did the purchased articles on the widely read portal politico.eu against Lithuania and the LNG terminal not in line with the "useful idiots" category?

When Lithuania is wracked by disputes through R. Karbauskis' cunningly offered up national costume or Lukiškių Square monument "problems", shadowy processes which act against state interests continue at peace.

Here's another process ongoing across from reality and in my opinion it is openly corrupt. Let us once more recall the famous leaked conversation between the MG Baltic representative and head of Kauno Tiltai [Kaunas Bridges] N. Eidukevičius, as well as A. Rusevičius over D. Zabulionis' appointment to the Road Directorate. "We placed our man," N. Eidukevičius says. And while D. Zabulionis resigned, the results of his actions remain.

Just recently Minister of Transport and Communications Rokas Masiulis proudly announced that the nearly 10 million Road Directorate competition for the Šilutė-Rusnė bridge construction was won by Kauno Tiltai. The footmen are changing, but the main benefactors remain?

Of course they will always appeal to legal procedures or the presumption of innocence, but the facts stand. This is an obvious spit in the faces of the Lithuanian people. Is it not so, minister R. Masiulis and how are you linked with N. Eidukevičius? Let us see how the Seimas Anti-Corruption Commission act in this case.

The state cannot function normally without an influential and self-respecting opposition which would have its own vision of the state, whose acute questions would not be limited by an influences or fears. Unfortunately most questions, both regarding the influence of M. Kantor, as regarding various interest groups surrounding the prime minister, are not even asked. More convenient for everyone.

The Conservatives are offering the government to resolve questions it does not care about and the recently elected vice chairman of the Liberal Movement political party which has officially been accused of corruption continues to remain the chairman of the Anti-Corruption Commission. Authority over honour.

The suspicions brought against the Liberal Movement and the Labor Party in the political corruption...