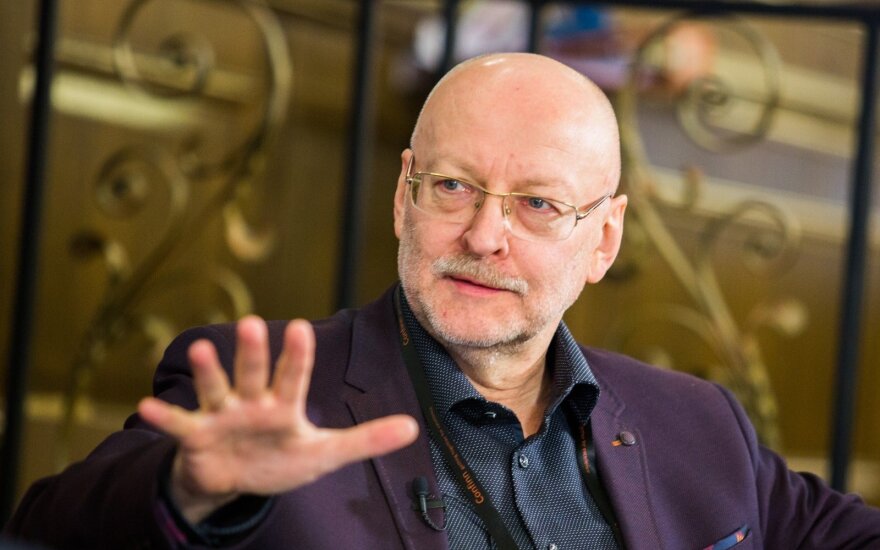 It is the middle of summer. Tortured by two summer months of autumn weather and rain, Lithuanians depart to Palanga to rest. Only our neighbouring Poles continue toiling at their computers.

At the urging of the Polish Ministry of the Interior and Administration they vote day and night so that every Polish passport would sport Vilnius' Ostra Brama. Ostra Brama is in a solid lead and this makes some Poles even happier than their athletes' performances at the World Championships in Athletics.

The Gate of Dawn on Polish passports? How should we react regarding this project of the Polish government? Should we lash out by means of a national vote regarding imagery of Suvalkai and Augustavas on Lithuanian passports?

It is always best to react to neighbourly nonsense by laughing it off. This way you keep your neighbour and perhaps the neighbour will open their eyes one day. This is why we should respond similarly as to the widely publicised newspaper of "Farmer" leader Ramūnas Karbauskis.

If only there was enough brains and self-control, we could release a publication just for the Polish Ministry of the Interior and Administration named Auszros Wartai [Aušros Vartai is the correct Lithuanian spelling], necessarily with sz and w. The opening statement should be written by, say, professor Bumblauskas. He should paraphrase Piłsudski, who is important to both sides, reminding Poles how correct the Boss was in saying that all the best Poland had is like in a doughnut – at the edges, while there's only a hole in the middle.

The voting in Poland shows that Piłsudski remains one hundred percent correct. There is nothing to match Vilnius' Gate of Dawn in Poland. Not the famous Częstochowa with its famous Mother Mary, nor the Vavel with the graves of kings match up to the gates of Vilnius. Not Toruń and Zamość, not the majestic cathedral in Gniezno. Not even Białowieża Forest. Nothing.

The Lithuanian Gate of Dawn is far more amazing than anything in Poland, whatever terrible things former Polish Minister of Foreign Affairs Sikorski and former head of the Orlen company Krawiec may have said about the Lithuanians and Lithuanian Poles. And this is confirmed by Polish voting, not by the bleating of arrogant Lithuanians.

However since we, the Lithuanians, are just like our brothers Poles, we view the Poles' voting for the Gate of Dawn on their passports without humour.

Minister of Foreign Affairs Linas Linkevičius, instead of sending high quality photos of the Gate of Dawn to the Polish government and leaving the Poles to deal with the stupid actions of their fellows, began seriously explaining that the Gate of Dawn must not be placed on Polish passports, that it is not normal and such. The Polish ambassador's deputy was called to the Ministry of Foreign Affairs.

Everything as usual among the descendants of the szlachta [legally privileged noble class of the Polish-Lithuanian Commonwealth]. The nonsense of radicals on one side has the other side, equally nonsensically, up in arms.

So overall, business as usual. Polish radicals wake up Lithuanian radicals or vice versa. And it will always be this way. Yes, just how the Kremlin needs it with Zapad exercises nearing.

We will first bicker over the image of the Gate of Dawn on Polish passports, which will never happen. Then regarding "w" yet again and just when hope finally appears in Seimas to cease distorting the names of Lithuanian citizens based on the stencil of Prūdas-Bugailiškis [a satirical character on Lithuanian television]. You take our Gate of the Dawn, well we won't give you the letter, take that! Meanwhile someone will be awarded medals in Moscow due to our szlachta stupidity.

That's the least of our troubles of course. But nationalism was very harmful to our nations in the 20th century in terms of life and freedom. Nationalism is even more dangerous to our life and freedom in the 21st century.

We could condescendingly bemoan how Kaczynski's Poland has overindulged with nationalism. But is Lithuania all that far from it?

Would it not be better to react to the Polish voting based on European teachings? Starting with our ministers of foreign affairs and the interior, ending with students and schoolchildren, we should send our brother Poles a pretty picture of the Gate of Dawn each.

Let us celebrate what we have. Both the Gate of Dawn and our and your freedom.

Images of the Gate of Dawn , a church in Vilnius, should not be used in the new Polish passports,...