R. Valatka on Russia: it is idiotic to be a large North Korea in the 21st century 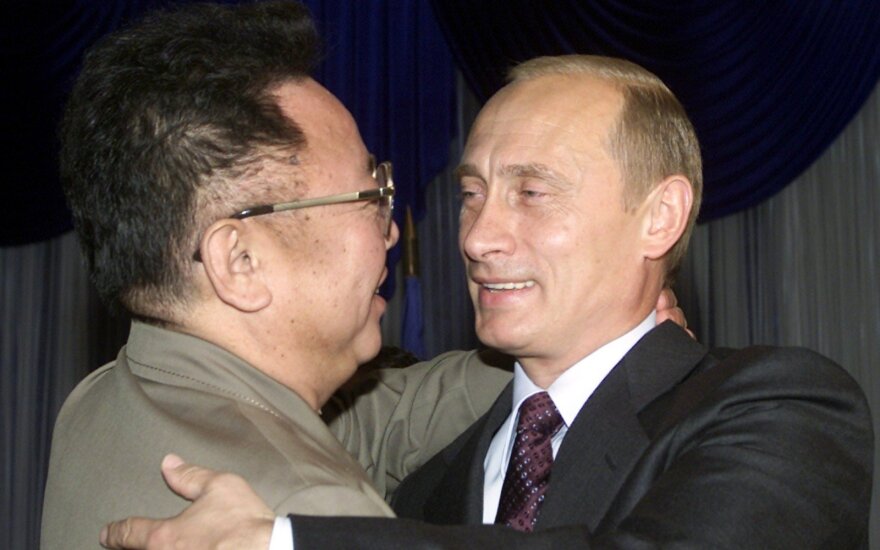 Russian President Vladimir Putin clearly threatened the West on Thursday, primarily the United States, LRT.lt writes. While reading his annual address, he boasted that Lithuania has created new generation rockets, which cannot be shot down by any anti-rocket systems. Some of these rockets are powered by nuclear engines, others fly ten times faster than the speed of sound, while others move under water faster than any submarine or torpedo. V. Putin has not used his bombs and rockets to threaten this clearly before. "You didn't listen to us before, listen now," V. Putin said. What does this mean?

When asked whether such statements by the Russian president are simply pre-electoral swaggering or an actual message being sent to the West, R. Valatka responded that while one must not underestimate one's opponents, one should also not overestimate them. The analyst is not fully certain, but he believes that the statement was more directed to the domestic audience because V. Putin has recently experienced a number of blows – Russian troops died in Syria and he could not respond to it, almost half a ton of cocaine was found in the Russian embassy in Argentina.

"I particularly liked former a statement by former advisor to V. Putin, Gleb Pavlovsky on Twitter where he wrote that the old man was rejuvenated specifically when he could threaten he would destroy the world. However a few hours later, more critical Russian journalists reported that the statement was about rockets where some of them were unveiled already in 2007," R. Valatka said.

V. Saldžiūnas finds that in terms of viewing the world, it has been revealed that Russia is a large version of North Korea. The notions on rockets remind him of N. Chrushchiov's famous phrase in 1956 – "We will bury you." It was intended for the United States and all of the Western world and it was still a time when it was possible to fake being more advanced, stating that something exists where it does not. "You could say that you have a lot of things – show mocks in parades and it looks like the Americans are truly behind and then they would hurry in the armament race. But 60 years passed and you can no longer hide anything," the correspondent noted.

He points out that you can show however many images or videos as you want, but what matters is whether you actually have the capacities. Russia may have many things, but it must not be forgotten that despite boasting, the new machinery and equipment has been known to break down in public, while production quotas are known to not be met. V. Saldžiūnas explains that this reveals a desire to grandstand, primarily before the Americans. As far as the recent statements are concerned, he echoes R. Valatka in believing that the statements are likely intended for the domestic audience, aimed to act as a show of strength.

While the Russian president's statement included notions that the development of anti-rocket defence systems in Poland and other states is meaningless because such systems can be overcome easily, R. Karoblis finds this to be untrue – the defence investment across Europe, such as in Poland is definitely worthwhile with Russia becoming a conventional threat with nuclear undertones.

Once again, as those before, R. Karoblis notes that the statements were likely intended for the domestic audience, seeking to mobilise and unite the public by specifying an external enemy. The politician also points out that the elections are nearing and such words are used to absorb some of the failures that have come to pass in the military sphere for Russia.

"I believe that the Wagner group's (Russian mercenary group suspected to be subordinate to the Russian military) crushing defeat is also significant. Another thing is that when talking about technologies, perhaps there is progress, but it is not as overwhelming as Russia expected. Western sanctions, both the US' and EU's are certainly making an impact and the West has a major advantage here. The Russian economy is smaller than that of some NATO member states, such as Canada. Just the balance of economic achievement makes it impossible, not even considering the technological advantage existing now," R. Karoblis said.

Minister of Foreign Affairs L. Linkevičius finds such statements to leave a grim impression and laments that it is very much reminiscent of the Cold War. Even if it is a statement for domestic audiences, it is nevertheless a head of state making such statements. The minister questions, to what extent the Russian president's statements were true to reality. He observes that it must have hurt Russian ambitions to be described as a regional power, rather than a world power, just that the understanding of power there is one linked with military prowess, rather than partnership in resolving problems.

V. Putin has been known to boast of partnership with the West, but soon turning around and making threatening statements and R. Valatka sees nothing new in this. He adds that, "To invest in provoking war when you lack power or to be a large North Korea in the 21st century is idiotic. Rather be a small United States than a large North Korea."

V. Saldžiūnas follows up, noting that Russia is not just a large North Korea, but furthermore an Orwellian society, where cause and effect are confused, claiming to be defending and not listened to, being supressed, but then going forward with threats of having created World War III weapons, which will likely never be used and only serve as a means of blackmail. In this respect, R. Valatka points out that Russia has always boasted a great deal of offensive weaponry, despite speaking of peace. "One thing we must emphasise for ourselves, particularly to those who say we should be friends with Russia – just what sort of mad entity we are living next to," he stated.

While such claims from Russia may raise tensions and leave many worried, V. Saldžiūnas points out that this is mostly the case if you take all the claims seriously, being left to think that you would rather not be hostile to such a lunatic. "You have Ivan living in your apartment block and he runs out into the stairwell all naked, with grenades hanging off of himself and says, "You don't respect me." What do you then do? You get a sturdier door, an alarm system and simply ignore him – you take care of your own security. It is just another piece of proof for Western states who still believe that concessions should be made for Russia, that dialogue should be pursued, that it is not possible, that it should be better. Here you have the man waving a nuclear club around, right in front of your nose," the correspondent states.

R. Valatka finds the Russian president's statement to be something of a sign of desperation, out of a fear that Alexei Navalny urging to not vote will work out, in light of there not being any alternative candidates. "In other terms, the man who has sat in the Kremlin for two decades is going insane, having no idea, what Russia thinks about him," the analyst summarised.

The Wednesday's training for Lithuania's strategic transport companies, the Armed Forces and the Aras...