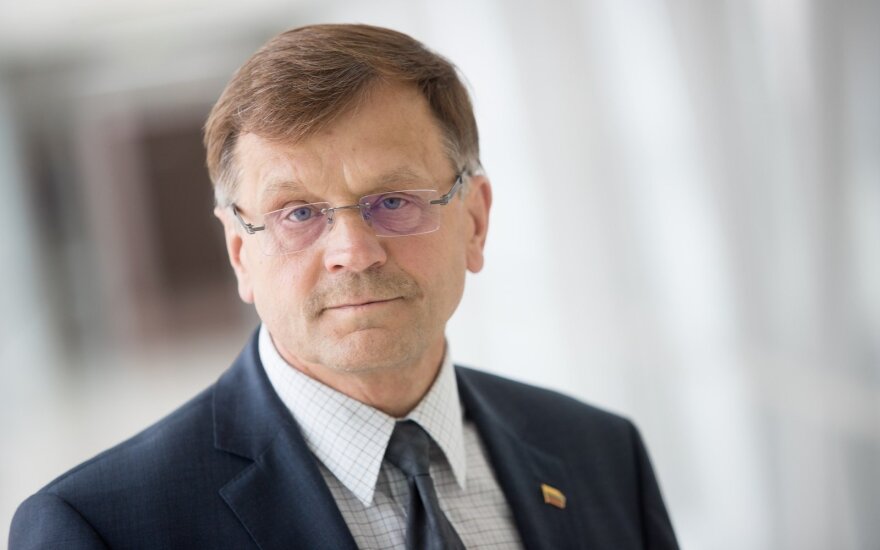 Upon the conclusion of the Seimas spring session and with the Farmer and Greens Union leader once again embroiled in yet another scandal, one can already clearly conclude – the reforms, if they happen at all, will continue to be superficial, the majority will be unstable and the "Farmer" leader will continue to ponder how to return debts to his women.

Another three years of Seimas work promise a constant decline in "Farmer" popularity and with that, ever fewer opportunities to reform governance.

I understand my Seimas colleague Povilas Urbšys' urging that Ramūnas Karbauskis would openly tell the public everything, but it would not change the situation. He could even spin a tale for three days straight, but it would be of as much benefit as an enema for a dead person, it won't help.

Consider it yourselves. Over a good half year I can see only one tangible achievement this Seimas has managed to accomplish has been to remove the statement that there are 42 forestries from legislation. This is only a weak start, at least a year is still needed for the forestry system to truly change. And this is only under one condition – if the cabinet is sufficiently decisive. But if not?

And this forestry reform would not have moved at all if not the votes of the Homeland Union – Lithuanian Christian Democrat Seimas group.

The merging of universities ended with the Seimas only declaring that it wants to merge something with something, but there is no specificity, education reform began simply from some sort of declaration, directions, guidelines being set.

Fine, the Seimas can express its intentions and outline directions, but what of it? The education system needs tangible decisions and things right now. Teachers themselves will definitely not begin creating a new education system for all of Lithuania.

The majority chewed the Labour Code a bit and spat it out as it was. Member of Seimas Tomas Tomilinas was also unsuccessful in proving (despite earnest efforts) that wages in Lithuania are growing not because of changes in the investment environment in Lithuania, not because of the European economy's growth, but because a genie made it so due to T. Tomilinas' wish.

Already prior to withdrawing from the Farmer and Greens Union I said that work must begin by creating premises over half a year to establish specialised alcohol stores. This decision would receive broad public support, there wouldn't have been any rock festivals in protest. Neither violence nor bans.

I agree that opposition from alcohol producers and importers may have appeared, but public support would allow to perform those reforms. And this would be a significant shift in reducing alcohol accessibility.

Now the majority has angered separate groups of people with minor decisions to ban things, people see that the majority is only covering itself with those bans, making a portion of society scapegoats, but being afraid of more serious reform. Or otherwise the "Farmers" are doing so at the behest of influential alcohol industry behemoths.

I support amendments that reduce alcohol accessibility, I voted only because there was a single truly wise decision in there – to ban alcohol advertising. I cannot be bothered to even write about all sorts of labels.

When I was little, we would sing a little song – "Liar, liar, pants on fire."

Mocking? Perhaps so, but R. Karbauskis also mocked his voters to the point where the taste of this mockery will remain for decades to come.

Voters' moods changing this significantly only over half a year is testament that the Farmer and Greens Union leaders' experiment with live people failed and it has already begun its trip toward oblivion. Even R. Karbauskis' public confession will not help.

This is also confirmed by the fact that Labour Party founder Viktor Uspaskich has announced his return to politics. Carnivores smell the decaying corpse of their foe very well and sneak along to take their territory, earlier gathering and indenturing their rival's vassals.

Recent surveys show that there has been a marked increase in voters who no longer know who they would vote for in Seimas elections. Many voters are already on the lookout for a new carnivore.

I do not know what will happen with that potato digging, whether we will do so with or without S. Skvernelis, but I predict that the situation will only deteriorate.

The new adventures of the Farmer and Greens leader R. Karbauskis with the author Greta Kildišienė have exceeded all boundaries and even the group's members now openly ridicule their leader. He has already been greatly wounded, but he will not change and will continue to think that those around him are hurting and persecuting him.

I spoke of that woman's influence on this politician and even potential blackmail already half a year ago during my withdrawal from the Farmer and Greens group. I spoke of it because I knew more than was publically revealed.

Back then I suggested a single solution that would have been effective and could perhaps have saved the group – I suggested R. Karbauskis withdraw from Seimas, if he cannot handle his emotions and attraction to this woman.

This suggestion stands. By withdrawing R. Karbauskis would aid his diminished reputation, would allow new leaders to present themselves and would at least partially save certain vital state reforms.

But R. Karbauskis will never do so.

He would rather leave a burnt out field and disappointed people behind him and by taking revenge for a stolen woman, he will open the gates for V. Uspaskich to return to power.

It would appear that President Dalia Grybauskaitė was correct in saying that the traditional parties need strengthening.