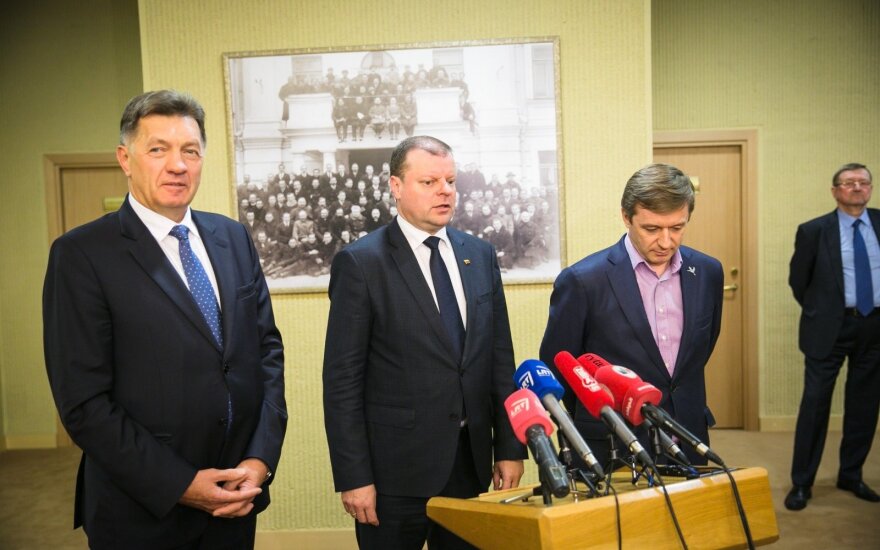 "Farmer" leader Ramūnas Karbauskis, facing criticism from coalition partners for a lack of leftist policy, stresses that Saulius Skvernelis government's decision to "dedicate 0.5 billion euro to reducing social segregation just this year is definitely leftist policy". However as economist Tadas Povilauskas notes, not all of the financial instruments included in the mentioned no less than 0.5 billion euro are intended for reducing social segregation. Furthermore both he and former Prime Minister Algirdas Butkevičius state that there is a lack of a financial basis for continuity.

Related articles
Grybauskaitė, Skvernelis, Karbauskis ranked as Lithuania's most influential politicians
Economists respond – who will be most impacted by the changes

With talks continuing about a potential Lithuanian Social Democrat Party (LSDP) withdrawal from the coalition government, party deputy chairwoman Rasa Budbergytė explained to LRT Radio last week that one of the reasons for disputes within the coalition is a lack of leftist policy.

„Over the more than half a year that we have worked with the "Farmers" as coalition partners, in my opinion certain world view differences emerged. We initially believed that the "Farmers" won the elections because they declared they seek to implement leftist policy and we believed that our views on core areas – reducing income inequality and social segregation – match.

However over this half year it turned out that neoliberalism is dominant, particularly in projects that arrive from the cabinet. I am not a neoliberal," R. Budbergytė said.

At this point Lithuanian Farmer and Greens Union (LVŽS) chairman R. Karbauskis hastened to stress that the decision to dedicate 0.5 billion euro to reducing social segregation is testament to the LVŽS' leftist leanings.

"Currently there clearly are two opposing opinions in the public sphere. One speaks of a leftist party which just can't find leftist policy in the current coalition's work. However as you know, this coalition is formed of said party and the Farmer and Greens Union. The decisions, for example the decision to dedicate 0.5 billion euro just this year to reducing social segregation is definitely leftist policy," he said.

What the sum is for

The Ministry of Finance aims for 195 million euro to be dedicated to a 30 euro monthly child grant, 90 million euro for raising the tax exempt income size to 380 euro (the level of the minimum monthly wage). 48 million euro is to be set aside for VAT exemptions for heating, prescription medicine, books and print, as well as transport services.

39 million euro will be needed to set a Sodra payment ceiling, 23 million euro will be earmarked for social insurance payment breaks for individuals starting independent business activities and also for other expenses. This is to all be partly compensated by removing the tax exempt income size boost for having children, rising excises and other factors. Altogether these proposals are to cost the budget 220 million euro.

"We will set aside half a billion euro in 2018 for increasing citizens' incomes, part of this funding is to be taken from the accumulated basket for change. It is a sizeable amount, the majority of which will reach the most vulnerable members of society next year. We will soon announce changes in the social security system. This, paired with tax reform will allow to increase the incomes of many Lithuanian citizens," Prime Minister Saulius Skvernelis told LRT.lt.

However he has mentioned changes in the social security system and revealed some of the numbers before. The cabinet's website contains a press release that states that an extra 252 million euro are earmarked for pensions.

In June 2017 588.4 thousand citizens received retirement pensions, thus every individual earning a retirement pension should receive at least an extra 35.69 euro, if the funding was not distributed based on differentials.

Not everything is for reducing social segregation

"People in the middle income bracket and have children, their situation will essentially remain the same, they would "receive" those 30 euro through tax free income size, now it will simply be a direct grant. However the situation improves for families that earn a minimum or only slightly larger than that wage and received children's grants of 28 euro. Such families would receive 30 euro per child and another 28 or 15 euro grants based on the children's ages.

In essence the situation really does improve for families with many children and low incomes. This can be viewed as reducing social segregation. Of course there could be moral questions due to families existing that intentionally do not work so that they would receive the grants," T. Povilauskas said.

Pension reform cannot even be called a reform, a system change – it is simply mandatory considering the acceleration in wage growth. It is more an inevitability rather than any merit of the government. Sodra payment ceilings, exemptions for investors, social security payment breaks for those starting individual businesses, of course do not contribute to reducing social segregation," T. Povilauskas commented.

Former Prime Minister A. Butkevičius says that the efforts of the current cabinet to reduce social segregation do not stand out compared to the previous cabinet.

There were also efforts to aid employees whose wages are relatively low – the tax free income size was raised. As we could not raise wages for the entire budgetary sector, we gradually raised it based on separate approved programmes, one of them for culture staff, another for social workers," A. Butkevičius recounted his cabinet's efforts in combatting social segregation.

Pensions had to be compensated by his government, A. Butkevičius notes, but if that had not been necessary and could just have been increased, they would have risen by 30-45%.

Improvements to financial situation may not last long?

Cabinet representatives were unwilling to answer whether the planned measures are long term and whether such grants are to continue following 2018, considering the financial resources to be employed (a part being from the "basket for change", a part from economic growth).

According to V. Butkevičius, the decision to raise pensions and other grants was based on the very worst scenario – long term perspectives were not considered.

"Why was the social model created? So that the influence of politicians in setting pension sizes could be eliminated. It was a Western system, where pensions are indexed every year based on the growth of the wage fund. However this was halted after the Seimas elections though the system would have worked successfully.

In this case there is no certainty of continuity and it does not exist for a simple reason – it is a question of competence, a lack of knowledge," he said.

T. Povilauskas is also not overly optimistic regarding the continuity of the listed measures, stating that, "Is the "basket for change" a stable thing? It would appear more unstable than stable. We should praise the cabinet for accenting these changes, understanding that there is much inefficiency in the public sector, thus let us hope that in the coming years the basket will persist or will perhaps even increase. But looking historically these changes were not always consistent.

On the other hand a part of the sum is from the "basket for change", while a part is from economic growth. For now there aren't many risks, the economy should grow, however it is hard to say for further years. If the economic circumstances change, the programmes and measures that could reduce social segregation could disappear."

Restructuring would leave Lithuania with public service staff of 20,000 - intermin

Reform of the public service in Lithuania would leave the country with about 20,000 civil servants,...