R. Juknevičienė responds to R. Karbauskis comments on the status of V. Landsbergis 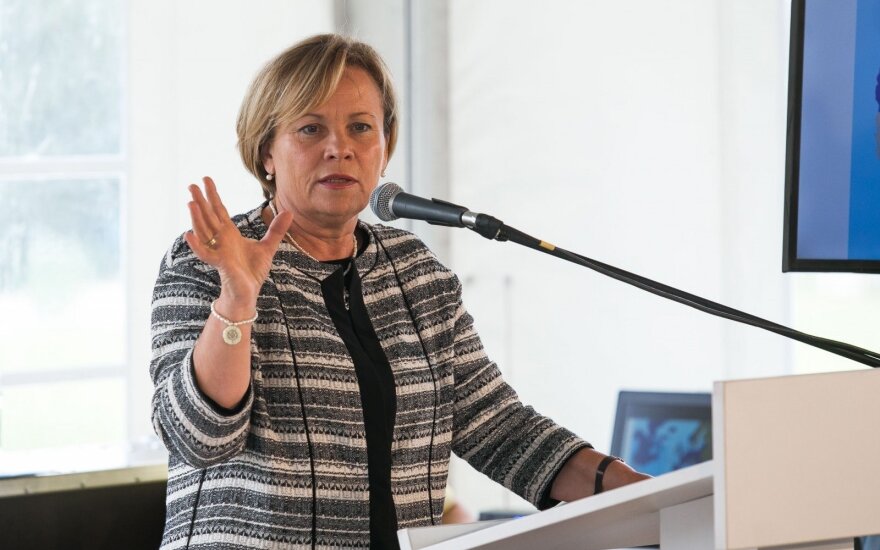 "What was this man doing when V. Landsbergis led the country during the hardest period? The answer. Was seeking an old Armenian in Moscow. What helped find him, Moscow KGB archives will likely not provide the answer however Viatcheslav Moshe Kantor, a man from Putin's entourage, continues to be a business partner of his. Take the time to google, you'll find much of interest," R. Juknevičienė wrote on Facebook.

According to the MP, "When V. Landsbergis and many others took Lithuania toward NATO," R. Karbauskis "Organised a referendum against NATO with a group of pro-Russian anti-NATO activists."

"What was this man doing when Vytautas Landsbergis and others took Lithuania toward the EU? Answer – demanded that membership be postponed for 25 years, later organised a referendum against land sales to foreigners, essentially against the EU," R. Juknevičienė stated.

The member of Seimas continued, asking, "What was this man doing when Lithuania aimed to rid itself of energy dependency on Russia."

The prefect of the largest Seimas group, the Lithuanian Farmers and Greens Union, Ramūnas Karbauskis stated on Friday that he doubts whether most of his group's members would support Seimas Speaker Viktoras Pranckietis' initiative over granting former Supreme Council – Reconstituent Seimas chairman Vytautas Landsbergis the status of former head of state and the guarantees associated with it.

R. Karbauskis himself told BNS on Friday that he personally does not support such a proposal and stressed that this was exclusively an initiative by V. Pranckietis, done without consulting the group.

"To hope that a majority of us or some portion would support this decision, I wouldn't be certain of it," R. Karbauskis told BNS.

The deputy group prefect for the opposition Conservative group mused that this initiative could obtain sufficient support in Seimas if it was supported by the Conservatives and a part of the Farmers.

The "Farmer" group is to debate this question next week.

An avalanche of slander since childhood

Meanwhile current Homeland Union – Lithuanian Christian Democrats (TS-LKD) leader Gabrielius Landsbergis commented on Facebook on Sunday that he can recall slander being poured on his grandfather and whole family since childhood.

"I can remember the smear campaign since childhood – destroyed collective farms and villa in Switzerland built out of the remnants," G. Landsbergis wrote.

The politician points out that this question of granting V. Landsbergis presidential status has been raised in almost every Seimas term at the very least once.

Several days ago Seimas Speaker V. Pranckietis publically shared a thought that it would be proper to discuss and grant the then factual head of state V. Landsbergis, who is to celebrate his 85th anniversary in October, the status of former president.

Immediately after this statement was released, the head of the largest Seimas group and party, the Farmer Greens, Ramūnas Karbauskis publically expressed doubt whether such a proposal could receive support from even the "Farmers" in Seimas.

G. Landsbergis did not miss this.

"I do not know whether the Seimas Speaker has any malicious intentions, but a truly wise politician would first check if at least his group would support his idea. If not, then is it worth attempting it? And if he knows that they do not support it then his actions are a simple ridicule of the former head of state. Even the timing is suitable for such ridicule," the head of the largest opposition group stated.

The "Farmer" Social Democrat coalition partners also contributed comments and insights regarding granting V. Landsbergis presidential status, noting their doubts in the judicial possibility of such an action. They pointed to a Constitutional Court ruling that the office of Reconstituent Seimas head could not be seen as equivalent to the country's president.

Having been sentenced and imprisoned for attempted fraud, but not lost his mandate as MP, the politician told Lietuvos Rytas that "V. Landsbergis was never the head of state."

According to Butkevičius, the factual head of state was the then Prime Minister Kazimira Danutė Prunskienė.

"That one person sat in the Supreme Council room, ate loaf bread and played the piano," A. Butkevičius told Lietuvos Rytas.

Reacting to V. Pranckietis proposal and A. Butkevičius' mockery toward V. Landsbergis, the latter's grandson G. Landsbergis wrote on Sunday that, "Are you angry the "Farmers" are not enacting their promises? Angry that Ramūnas is not telling the truth? Here, be angry at Landsbergis instead. It has worked so far, it'll work now too. But perhaps this is enough? If we do not have an answer perhaps let's not raise the question? Just out of respect. Or simply out of common sense."

R. Sotvarė-Šemetienė. Don’t seek grey cardinals in the list of the most influential