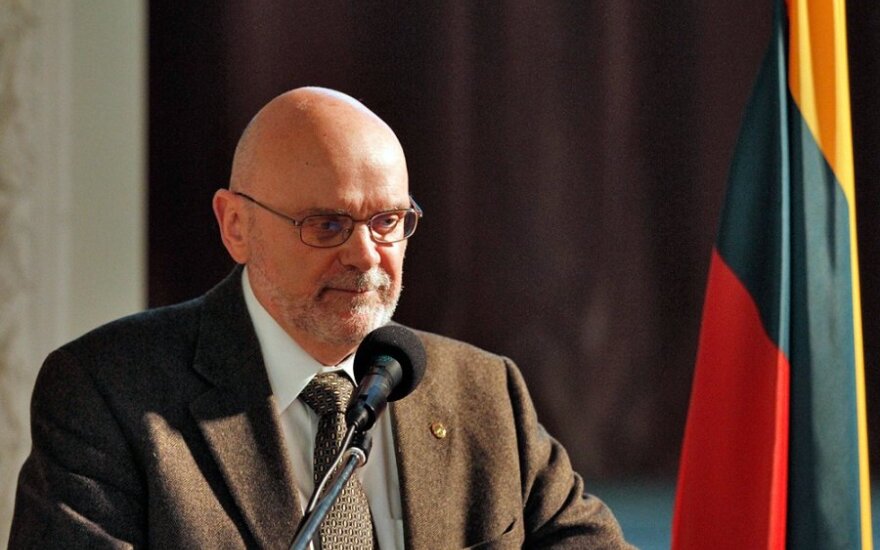 Just as antisemitism, xenophobia or romaphobia existed in the subconscious before, so it will remain, however it is not overly threatening.

Professor emeritus of the US Millersville University Saulius Sužiedėlis told this to LRT Radio. According to him, history shows that such moods become threatening only under specific conditions, while in other cases nationalist views can even be healthy.

In commemoration of the International Day Against Fascism and Antisemitism, the international conference #AtmintisAtsakomybėAteitis [#MemoryResponsibilityFuture] was held in Vilnius. Professor S. Sužiedėlis was the keynote speaker at the event.

Several years ago the professor stated that Lithuania almost doesn't have such Holocaust denial as can be found in the West, but there are elements of attempting to diminish the role of Lithuanians in the process. Compared to his statement seven years ago, he believes things have now changed, with an increase in academic articles and monographs on the topic, albeit it is a question how impactful this is for regular citizens, compared to the academic world or the public elite.

"I believe that those things [antisemitism, romaphobia] will continue to exist in the subconscious as they have before. Human nature, at least in my opinion, is to somehow look differently at that other (with a capital O), at an individual from a different culture who is perhaps threatening in regard to certain people. It will remain. I believe what is most important is that these things appear out of circumstance, based on the situation. Up to the First World War and during the inter-war period Lithuania had no significant pogroms, there were incidents, but what happened in 1941? It was a sudden turn. It was created in the context of certain circumstances.

Say if we take the mid-4th decade of the 20th century, even Antanas Smetona himself, who was no liberal, spoke against racism and antisemitism. But you know that was also circumstance because at the time the question of Klaipėda was relevant and Germany, the Third Reich, was then rather threatening toward Lithuania.

Thus while there are no circumstances, these moods are not threatening. Bluntly stated, they do not harm people. But when certain situations arise (for example the currently escalated refugee question, the so-called Islamic wave), it seems to me they naturally encourage a certain hostility, fear among people. It is very easy to manipulate this for politicians. Of course that's not just a European, but also American problem. Not just Lithuania suffers from it," the professor stated on the persistence of xenophobia.

S. Sužiedėlis points out that the significant concern with nationality for Lithuanians stems from the nation gaining statehood out of repressions and marginalisation in the 19th century and needing to strengthen its identity. "There's nothing wrong with it. I believe there is a certain healthy (even late Leonidas Donskis would say so) side to nationalism, even if it sounds terrible to the ears of a Westerner.

[...] Of course nationalism can become a weaponised and dangerous movement, but I believe that national identity is crucial for Lithuanians. I do not blame anyone who worries about Lithuanian emigration to the West and certain identity questions. I do not see why it has to be linked to hatred for others," the professor pointed out.

While some argue that the numerous initiatives linked to Holocaust commemoration in Lithuania are simply being used for show, S. Sužiedėlis sees nothing of the sort, stating that "We are celebrating independence, our centenary, we have our myths, our historical values, we celebrate, say November 23 and the establishment of the army, February 16 – statehood day. Is that also for show? This [the claims] doesn't sound serious to me]. It smells a little of an unhealthy pathos.

Let us recall one thing – in Lithuania there was never another massacre on the scale of the 1941 Jewish genocide. It was the most terrible mass murder in Lithuanian history. Approximately 140-150 thousand people were murdered over three months, the whole ethnic group almost annihilated. Could there be any analogue to this? I see no show here.

Of course superficial or perhaps insulting to the seriousness of the topic public relations actions should be avoided. But for example what happened in Molėtai last year was a massively important event for Lithuania. I see no show here – only people's good willed intent after 75 years to finally evaluate this event, which was long lessened and viewed as the tragedy of others, not Lithuanian citizens, but other people, seemingly having come from Mars, that it's not our issue. This is exactly our issue because it is a Lithuanian tragedy, not just that of Jews," professor Sužiedėlis emphasised.

When asked how important it is to reflect on past events, no matter how painful, the professor found it particularly important. He compares how in the USA there is a similar issue with the history of the civil war and racism, with many being unwilling to speak of it or admit what happened. "There have always been such people and will continue to be, but I believe that it is healthy to look at our own wounds. I am not saying we must brutally scratch at them, but looking at our past with open eyes and admitting that which was. Next year we will commemorate the centenary, a very important mark, but we also have to remember what was wrong. Of course the holocaust must always be viewed as, in my opinion, the most painful historical wound of Lithuania," he said.

The Roma Holocaust is a rarely discussed topic and as S. Sužiedėlis points out, it is not only a problem in Lithuania. While the scale was smaller than the Jewish Holocaust, with 500 to 1000 people being murdered, the professor emphasises that these were nevertheless people of Lithuania and that the disregard for their hurts is an extremely old entrenched perception of Roma as vagrants failing to form a serious ethnic community. In regard to the Roma Holocaust, the #AtmintisAtsakomybėAteitis event is also to feature discussions of it, which the professor finds to be a good first step.

In terms of his own keynote speech, Warning from History, S. Sužiedėlis stated that, "I believe that antisemitism and xenophobia will continue to persist as phenomenon, however we have to carefully monitor the political, social and economic circumstances and immediately foresee, based on historical examples, what could happen if we misjudge such crises.

For example there was the refugee question. Lithuanian history in 1940-1941 – during the first Soviet era there was great antagonism and terrible crisis. We should manage to see and contain this. Much depends on political behaviour. When saying "political", I mean it in the broadest sense – the cultural elite, officials and such. If they adequately react at emerging crises and understand where the trouble lies, then I believe we can contain the situation. If not, we already know what can happen."

National myth is not simply history. Open letter to the German historian