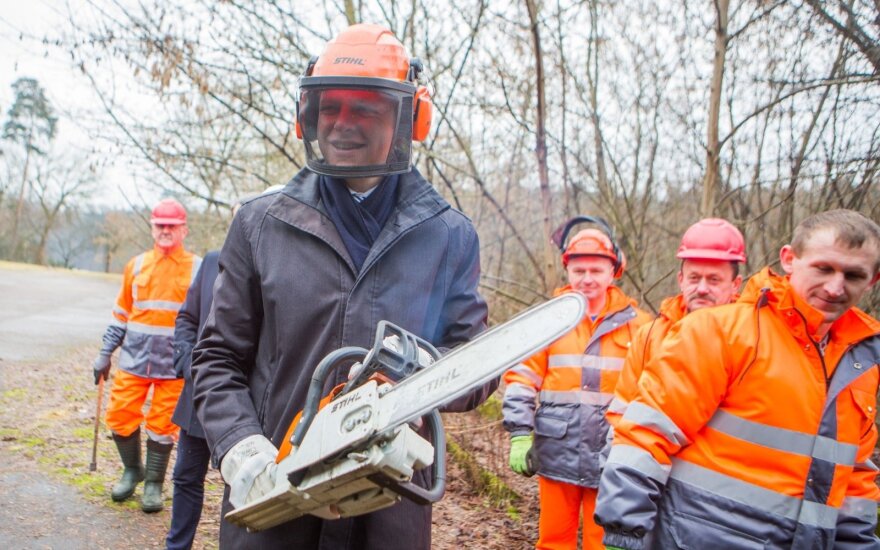 A lazy city mayor, the National Stadium and its (non)construction or the 2019 presidential elections, which could have provoked Prime Minister Saulius Skvernelis to speak out against the Vilnius city Mayor Remigijus Šimašius in the news media? The clash of these two politicians leaves numerous questions as to the reasons for it, LRT.lt reported.

Yesterday the Prime Minister struck out against the Liberal Vilnius mayor, with PM Skvernelis suggesting to LNK news that there has been little tangible work done in Vilnius over Mayor Šimašius‘ term so far. Among the issues the Prime Minister mentioned was the problems surrounding the National Stadium.

Related articles
Four scenarios of the coalition’s future
Popularity of Skvernelis is not a record breaking: one PM was even more popular

R. Šimašius responded to the Prime Minister’s criticism by stressing that the city administration has been struggling with state government institutions such as the State Land Service which, according to him, has been repelling investors and stressed that the city has been making significant strides where little progress could be seen at the state level, particularly in the gains made by Vilnius municipal enterprises compared to state owned enterprises.

A prelude to the presidential elections?

The senior Liberal member points out that his party has faced criticism from the “Farmers”, but had not yet received any such statements from the Prime Minister’s side. He recalls that the “Farmers” often objected to the Liberals due to the story of E. Masiulis and differing value bases, but the Prime Minister had little difficulty with these factors, with this type of statement being something novel. E. Gentvilas notes that PM Skvernelis is risking by employing such rhetoric given the potential need for Liberal support in enacting future reforms.

Lithuanian Farmer and Greens Union member Povilas Urbšys views the Prime Minister’s comments as accurate however. The politician states that the Vilnius mayor has dedicated significant attention to criticising the work of the cabinet and Seimas, distancing himself from his direct responsibilities.
Urbšys highlights that the currently ongoing projects were begun in the term of A. Zuokas and there have been no notable changes that could be linked to the current mayor.

“I believe the time has come for the mayor of Vilnius to primarily care for Vilnius and its inhabitants, rather than all of Lithuania,” the member of Seimas summarised.

He continues to note that the Prime Minister’s criticism was based on lengthy observations of the municipality’s inactivity which harms not only Vilnius, but all of Lithuania. Urbšys states that the Prime Minister has been very patient with the administration of mayor Šimašius, but at this point no longer held back in feeling that the Vilnius mayor is working more for public relations rather than tangible tasks.

Something we don’t know yet?

Communications expert Arijus Katauskas says he was earnestly surprised by the Prime Minister’s statements. He explains that there has never before been a case where the Prime Minister would lash out against the Vilnius Mayor and is currently unable to answer as to why exactly such statements would have been made now.

The expert is not inclined to agree with E. Gentvilas’ thoughts that this could be linked to a beginning presidential election campaign and proposes a different possibility. According to Katauskas, the situation could be linked to the National Stadium following the discussions about the Žalgiris stadium, something brought up in Skvernelis’ statements. The expert concludes that there is something to the situation that has yet to surface and become clear.

“Saulius Skvernelis is no beginner in politics and communications. He is one of the best communicators, there is a touch of the interior affairs system, a sort of pointedness. But you definitely cannot accuse him of being a poor speaker. Furthermore he definitely knows when to speak up and when not to. Such a thing could not be said without any reason,” A. Katauskas concluded.

Finally to be completed?

In mid-March the municipality accepted the proposals of three participants for the construction of the National Stadium. The competition was launched on September 7 last year, but the competition’s duration was extended three times up to March 1st.

Among the companies wishing to construct the stadium we can find the Turkish KAYI Construction, the Icor engineering network companies Axis Industries, Kauno Arenos and Venetus Capital, as well as the company Vilniaus Nacionalinis Stadionas which was formed specifically for the project by KDS Grupė and the Polish Budimex.

Natl Stadium concession tender must be extended until 4th application (1)

Three consortia of companies have applied for construction and management concession of the 90 million...

While the Liberals flounder, the Conservatives seek to get rid of entrenched stigma

Three Lithuanian and foreign companies or consortia have passed the pre-selection stage of the bidding...