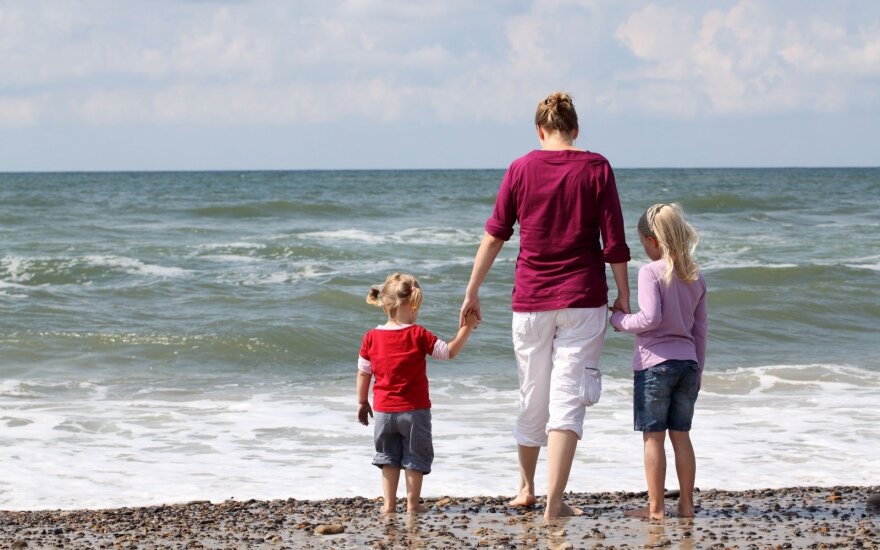 Lithuania is threatened by a new demographic crisis – next year will mark the lowest number of births over the past 60 years and over the next five years, the number of working age individuals will decrease in 95% of municipalities.

This was found by Vilnius University Geography and Land Management Department docent Rolandas Tučas who performed a predictive research of Lithuanian population change during the 2017-2021 period.

Counting how many immigrants would be needed

"It is predicted that due to the fairly rapidly decreasing birth rates and rapid emigration of younger, middle aged citizens, the rapid aging of society will be felt. There will be an 8.8% decrease in working age Lithuanian residents (15-64 year old demographic group), from 1.876 million in early 2017 to 1.711 million in early 2022," the researcher shared his insights with Delfi.

Related articles
Over 100 NGOs, academicians call on president to veto family law
The refugees most feared are the best at adapting in Lithuania

According to R. Tučas, this will also be influenced by the more numerous demographic groups shifting into the elderly or dependent groups.

"Thus to maintain the already too low number of working individuals, over the next five years it would be necessary to attract at least 165 thousand individuals of working age to Lithuania (in addition to those already immigrating). The number of immigrants to Lithuania would have to be at least double or even triple what it is now," he explained.

Based on Statistics Lithuania data, over the past five years (2012-2016) 108 thousand immigrants arrived in Lithuania, most of them being returning Lithuanian citizens.

"Every month an average of 1.8 thousand immigrants arrive. For us to maintain the current number of those employed in the coming five years, the number of working aged immigrants would need to be 4.5 to 5 thousand per month. Can this be achieved? Very doubtful," R. Tučas admitted.

According to the researcher with emigration rates rising even further in 2017, immigration has also increased – the number of returning or newly arriving individuals in some months has already been in excess of 3,000, however not all are of working age.

"We will not avoid social and other issues no matter what because it is not possible to compensate the lack of labour force in certain sectors (such as education) with immigration.

It is also not worth expecting that the labour market will be filled out by current children either because the number of citizens in the 0-14 year old age group will also decrease in the 2017-2021 period, albeit slowly for now (-0.8%).

Later the trend of decreasing youngest demographic groups will be increasingly intensive due to declining birth rates. Meanwhile the number of retirement age individuals and dependents (65 years old or more) will also increase," R. Tučas warned.

Decreases in working age individuals in 95% of municipalities

According to the expert, over the research period the growth of elderly age groups will not be massive and will reach only 2.4%, however in the long term, when this demographic group will be joined by the boom generation born in 1955-1964, this increase will become far more rapid.

"This will lead to increased demand for labour, thus even the already unachievable idea of attracting 165 thousand working age immigrants to Lithuania over the next five years should be even more ambitious. The number of working age (15-64 years old) permanent residents of Lithuania will decline in 57 of 60 municipalities in the country in the 2017-2021 period," the researcher pointed out.

The results show that this demographic group will only increase in number in the municipalities of Neringa (16.5%), Klaipėda region (5.1%) and Kaunas region (4.5%).

Visaginas to change most rapidly

The municipality of Visaginas will be notable for the greatest decline in working age individuals, decreasing by almost a quarter over the next five years (-24.2%).

"In the overall Lithuanian context, such clear cut changes will be due to the fairly unique demographic structure of this municipality, where the pre-retirement age demographic group is notably numerous. Furthermore resident emigration from Visaginas is also fairly intensive," R. Tučas noted.

Even the Vilnius city and Vilnius region municipalities will experience this (-1.9% and -1.4% respectively).

"Such changes in Vilnius will be the shift of working age individuals born in 1955-1964 into the demographic group of permanent Lithuanian residents aged 65 or older," the researcher stressed.

Largest decrease in children in Northern and North Eastern Lithuania

According to R. Tučas, the predicted trends of changes in the dependent age (0-14 years old) children's group will be similar across Lithuania in all municipalities.

However the number of children younger than 5 years old will be lower at the start of 2022, with birth rates expected to decline fairly rapidly in 2017-2021.

The number of children will also rapidly decline in some Sourthern Lithuanian municipalities: Lazdijai region (-14.2%), Alytus (-13.2%) and Vilkaviškis region (-11.7%).

The number of children aged 0-14 years old will increase slightly in the Kaunas (1.2%) and Klaipėda (0.5%) municipalities, however the capital Vilnius will be noted for the largest growth. The 0-14 year old age group will increase by a whole 12.4% in the capital.

That said birth rates will decline fairly rapidly in Lithuania already from 2017, while the birth rate increase in Vilnius will accelerate a little later – from 2019.

"Furthermore the migration of children aged 0-14 years old (internal migration, emigration) is relatively low – this will also help maintain this group's demographic stability for a time. However this will not last – after 2021 the rates of decline in the group will accelerate greatly and this will be strongly influenced by declining birth rates. It is predicted that these trends will not bypass the Vilnius city municipality either," R. Tučas said.

Lowest number of births in 60 years already next year

He notes that only two municipalities will mark an increase in birth rates during the 2017-2021 period – Klaipėda region and Kaunas region (4,3% and 3.3% respectively.

"Initially it may appear incredible, however the research results show that after several years of growth in the Vilnius city municipality, over the coming five years it will decline by almost a tenth (-9.4%)," the expert pointed out.

The number of children will decline markedly slower in municipalities around the Lithuanian urban centres (except Klaipėda and Kaunas regions where the number will grow): Šiauliai region (-2.7%), Alytus region (-4.9%), Vilnius region (-5%) and Panevėžys region (-5.5%).

The negative trends in birth rate metrics will be greatly influenced by the decline in the number of women in the most important reproductive age groups – 20-24, 25-29 and 30-34 years old.

Only the elderly will remain?

"The trends for the elderly dependent age (65 and older) permanent Lithuanian citizens will be the opposite than those of the earlier discussed younger aged demographic groups.

From a regional perspective, mostly opposite trends can be seen in the 2017-2021 period in various municipalities in terms of elderly permanent Lithuanian residents.

"It is notable that the number of the elderly will increase namely in Lithuanian urban centre municipalities. It is likely that with housing prices declining, retiree numbers in the Lithuanian cities will rise even faster. Lower housing prices will make for favourable conditions for the elderly to obtain housing and live closer to children, healthcare institutions and such in the cities," R. Tučas noted.

Lithuania will also have municipalities where the number of the elderly will decline.

"Primarily these are the Lithuanian municipalities in the North East (except Visaginas and Utena region), Southern Lithuania (except Alytus, Birštonas, Druskininkai and Marijampolė) and the Southern parts of Samogitia, which have already been notable for their larger number of elderly residents," the researcher said.

With a relatively short average lifespan, working age individuals have to provide for a fairly large amount of elderly dependents. It is undoubtable that this social burden will rise rapidly in Lithuania.

For example if the coefficient of dependent elderly residents was 29 on January 1, 2017, the research data shows that on January 1, 2022 it will be 33, with prospects for continued growth," R. Tučas said.

Thus he advises to rapidly and decisively adopt policies of attracting working age individuals to Lithuania.

Over 100 NGOs, academicians call on president to veto family law

A family strengthening bill is making headway in Lithuania's parliament, a law that opponents dismiss...

Amid a rapid decline in Lithuania's worker-to-retiree pension , the central Bank of Lithuania is...

Lithuania's economic indicators are no longer having an impact on emigration flows, a new trend that...