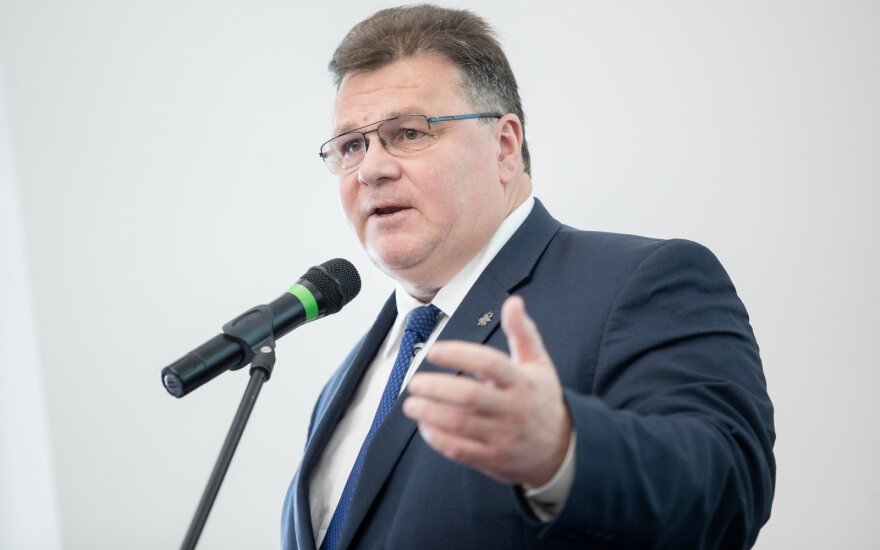 Though there is still more than a year and a half to the presidential elections, parties are already deliberating, who of their membership could seek this highest government office. Social Democrat leader Gintautas Paluckas did not hide that party members are already discussing the potential candidacies of European Commissioner Vytenis Andriukaitis, MEP Vilija Blinkevičiūtė and Minister of Foreign Affairs Linas Linkevičius.

The presidential elections are to be held in May 2019, with the conclusion of non-partisan Dalia Grybauskaitė's second five year term. The possibility cannot be denied that there could be more candidates among the Social Democrats who would seek to run in the elections, but one way or another, only one will be chosen, following an internal election within the party.

Related articles
Presidential elections: Grybauskaitė‘s influence and whether Skvernelis can win
The most likely pretenders to Social Democrat leadership

According to what G. Paluckas told LRT.lt, the Social Democrats should primarily consider whether the candidate is able to unite people for joint work and has a solid grasp of the most important domestic and foreign affairs.

"President D. Grybauskaitė has raised the bar high with her work quality, thus no party's candidates will be able to disregard it and be less prepared for the office," the Social Democrat leader said.

"For now I have no comments. For now I am very interested in how Andrius Šidlauskas will perform in the swimming world championship," V. Blinkevičiūtė dodged a direct answer. She has already participated in the presidential elections in 2004, following the impeachment of Rolandas Paksas.

Speaking of what areas the new president would have to dedicate particular attention to, the head of the European Parliament Committee of Women's Rights and Gender Equality stated she believes that the head of state must be both concerned with the core issues facing the Lithuanian people and good relations with neighbouring countries and EU member states.

"But this should all be oriented toward the key goal – that the people of Lithuania would want to live, work, create families, raise children and that they would feel safe doing so. This, in my opinion, is the main purpose of the head of state," V. Blinkevičiūtė said.

Unwilling to criticise his country

"I'm not thinking anything. It's not the right time," V. Andriukaitis smiled in response to his party members' discussions of his candidacy to the post of president. He has run for the office in 1997 and in 2002.

When asked what core problems he sees for the country, the veteran politician admitted that he would currently prefer to remain neutral in this question. "Those problems are, of course, clearly visible from Brussels, but I would not want to act as D. Grybauskaitė once did and will not criticise my country."

Nevertheless Andriukaitis mentioned that in recent months, while travelling around Lithuania and presenting his book about poet Justinas Marcinkevičius, he saw and heard that many people long for a just perspective and evaluation of what happened in Lithuania during the historic years of national rebirth and what is happening now. He explains that, "Many people feel demeaned, pushed away or that their actions have been inadequately evaluated."

"Currently I am not considering it," the Minister of Foreign Affairs L. Linkevičius responded, when asked if he is considering running for president.

When speaking of requirements for candidates who do choose to run for office, he stressed that they must be familiar with not only foreign policy matters, but also understand what the nation's people need the most.

L. Linkevičius did not hide that he notices that despite a decent evaluation of Lithuania at the international level, common people currently do not experience it in their daily lives. "There is more pessimism than there should be. Even though the level of livelihoods is less behind the European average than when we entered the EU (52% in 2004, 74% now), people are still going to the countries where they can earn more. There are still more people departing than return," he noted.

The minister is convinced that a growing economy will not only reduce emigration rates, but will even completely halt it because Lithuanians are notable among other Europeans for how home draws them.

"Just appealing slogans and speeches are not enough though, we should still perform much homework so that our compatriots would no longer leave or would return," Linkevičius stressed.

When asked if he would go to Poland as his first visit as head of state, a country with which relations have recently cooled, the minister laughed, responding that, "Once again about the elections. We talk during foreign visits with Polish Minister of Foreign Affairs Witold Waszczykowski, we exchange messages and calls. President Andrzej Duda's chief advisor Krzysztof Szczerski constantly visits our Snow Meetings thus we cannot say that our relations are completely awry. But of course there are problems to solve and they should be solved. One of them is the ban on using non-Lithuanian alphabet letters to write Polish names, which has lasted too long."

Premature for discussions of candidacy

Political scientist Kęstutis Girnius explains that the discussions of potential presidential candidates among the Social Democrats and other parties are laudable because when she ran for her second term, D. Grybauskaitė had no rival.

Speaking of the currently considered Social Democrat candidates, he noted that two are working in Brussels and L. Linkevičius is practically inactive within the party and was appointed at President Grybauskaitė's request.

K. Girnius is echoed by colleague political scientist Raimundas Lopata. He observes that L. Linkevičius is not exactly popular among his fellow social democrats.

If V. Andriukaitis chooses to participate in the elections, then the political scientist believes the voters will no doubt notice that he has made a bid for the presidency twice with no success, furthermore in the future elections, his high position in Brussels and health issues may prevent active participation in campaigning.

Political scientist Mažvydas Jastramskis does not believe that any of the three prominent potential Social Democrat candidates could expect great chances in a bid for the post of president – they could expect around 10% of the vote and would mostly receive votes from fellow social democrats.

The Lithuanian parliament has appointed Laura Matjošaitytė , deputy to incumbent chairman of the...