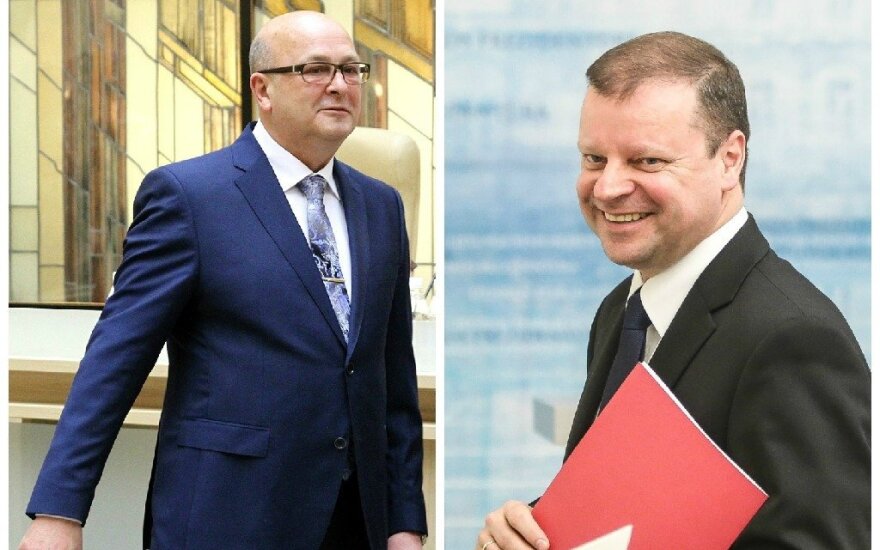 Potential non-partisan, independent presidential candidates are gradually surfacing in the centre right which can be relatively identified as being the electorates of Liberal and Conservative political powers.

The names of Gitanas Nausėda, Andrius Tapinas and Robertas Dargis are increasingly present in public discussions. They ranks are likely to be filled by candidates raised by the Homeland Union and the Liberal Movement. Knowing this, political powers are starting to consider potential candidates in the presidential race.

Related articles
Presidential election forecast from former PM and G. Landsbergis advisor
A. Kubilius - I. Šimonytė would be a good candidate

In the ranks of the Homeland Union – Lithuanian Christian Democrats (TS-LKD) Žygimantas Pavilionis, Vygaudas Ušackas and Ingrida Šimonytė are seen as potential candidates, though the possibility that the party may back other candidates is also not being dismissed.

TS-LKD Seimas group member Mantas Adomėnas says that the candidates from the centre right should be fairly prominent, while the left has failed to nurture new figures. "If you were to ask who, other than Naglis Putekis, is a representative of the left, it would be hard to say. [...] the Conservatives are moving toward more open elections, planning to organise primaries where not just party members will be able to participate. Our support for specific candidates will depend on the primaries. We are discussing a number of candidates in our party, but three names are being mentioned among those strongly linked to our party," M. Adomėnas told lrt.lt.

From among the Liberal Movement (LS), Vilnius mayor Remigijus Šimašius and Seimas group prefect Eugenijus Gentvilas are highlighted. According to the latter, the centre right will be "truly packed".

"The centre right will certainly be packed in the presidential race. Three weeks ago we had this seminar – board meeting. There was agreement, a decision to back a candidate, it will only increase this density more the density," E. Gentvilas said. According to the liberal, the vast number of candidates risks splitting up votes.

"Or perhaps there will be joint decisions? Say how in the last elections both the TS-LKD and LS supported Dalia Grybauskaitė. If a politician isn't clearly affiliated, perhaps finding mutual agreement is possible," E. Gentvilas mused. He repeated that the LS wishes to back its own candidate, but does not dismiss that in the end a joint candidate could be discussed.

"Party affiliation is not all that important. What matters is how liberal the person is in terms of human rights and economics. We can see such people beyond our party as well, this could be discussed [a joint candidate]," E. Gentvilas said.

Apparently the LS currently has several individuals seen as potential candidates, however "reality should thin this list". "If they were stood against a wall and asked if they will run in the elections, most would likely say no. Is my name there? Among those you can stand against a wall and ask, my name is there. What would I answer? I would say "No no, I'm not like that," E. Gentvilas laughed.

The advisor to the SEB bank president Gitanas Nausėda does not deny he could participate in the presidential elections. „I believe that as any citizen of the Lithuanian Republic, have the constitutional right to run for elected office in the Lithuanian Republic. Will I do it? You know, things could happen, for example if I do not like the other candidates and think „Wow, such terrible candidates," I will likely have to try save Lithuania from them, then perhaps it will be possible to seriously return to this question," G. Nausėda said in an interview with Delfi.

Andrius Tapinas does not dismiss the chance he may run for the office either. "Why should I say no? I am a citizen of this republic. Based on the Constitution all citizens over the age of fourty can try their luck. I admit I am popular, have a degree of influence and it continues to growing, sometimes even very pleasantly," A. Tapinas has said in an interview with the journal Žmonės.

The president of the Lithuanian Industrialist's Confederation Robertas Dargis is called an eternal presidential candidate, however it is unclear whether he is considering running for the office in 2019.

Former advisor to Andrius Kubilius and Gabrielius Landsbergis, political scientist Jonas Survila reminds that the president will be elected by all of Lithuania and not just the centre right electorate; this is something both prospective candidates and parties should keep in mind when considering their chances to express support.

"Even the entire centre right is only around 30% of the electorate which voted in the Seimas elections. Even all the voters of the traditional three major parties – the Liberals, Conservatives and Social Democrats – would not be enough to win the second round of the presidential elections because they do not form 50% of the vote.

For the past 15 years, 20 if V. Adamkus' first term is included, the people of Lithuania have elected non-partisan candidates. Even in 2002 when the then Liberal Democrat Rolandas Paksas was elected, they elected him not as a representative of a traditional party, but as an anti-establishment and anti-elite candidate. As such I think that we should not look just at the centre right and think in party categories," J. Survila commented.

Furthermore, according to J. Survila, over the coming two years likely Lithuanian support for parties will not rise, instead disappointment will mount. "It is likely that when the trial regarding Eligijus Masiulis and other Liberals corruption charges begins in autumn with all the evidence and conversation revelations, the second wave will hit not only the Liberals, but likely the Social Democrats as well because at the time they were in power and will probably be also relevant to the investigation in some form. This will be harmful for all the traditional parties because voters will say they are like that. This is why I believe a sizeable portion of voters will seek candidates outside party boundaries," J. Survila guessed.

Does this mean that candidates with party support, but not directly affiliated have more chances? "Likely so because as the election of D. Grybauskaitė and V. Adamkus showed, people did not want a candidate from a specific or strong political power. In the second round you need to gather 50% +1 vote and no party can gather even half of those votes alone for a candidate. As such parties can be a limitation just as much as a benefit, though of course party organisational and financial support can be very significant. But the candidate themselves should not limit or position themselves as affiliated to a specific party if they wish to win," J. Survila commented.

According to Mykolas Romeris University docent and former advisor to Andrius Kubilius, political scientist Virgis Valentinavičius, the other mentioned candidates – R. Dargis, G. Nausėda or A. Tapinas are not centre right candidates. "In the best case they are "Facebook" candidates. Speaking of the centre right, we should speak of specific views, consistency and a certain association with not only conservative or liberal ideology, but also the work of specific parties.

Of course the specifics of Lithuanian elections are such that there are many non-partisan candidates and S. Skvernelis is proof that such candidates can be successful. But at the same time S. Skvernelis shows all the limits for the possibilities for such candidates pulled from a hat, when ratings plummet straight through the ground. S. Skvernelis is in one bed with Ramūnas Karbauskis and we cannot speak of any rightist sentiment. In terms of politics he is a leftist candidate. I hope that in the end all the candidates you mentioned are left in the margins and the struggle for the post of president will be between candidates representing serious parties. I hope that the centre right candidate is of the Homeland Union and competes with a candidate backed by a serious leftist party," V. Valentinavičius told LRT.lt.

According to the MRU docent, TS-LKD candidates that could be considered are V. Ušackas, I. Šimonytė and Ž. Pavilionis. "With such a selection I believe that any of these conservative candidates are better and more acceptable than the "Facebook" candidates," V. Valentinavičius added.

A. Kubilius - I. Šimonytė would be a good candidate

With an eye on elections, Gintautas Paluckas , chairman of the Lithuanian Social Democratic Party (...