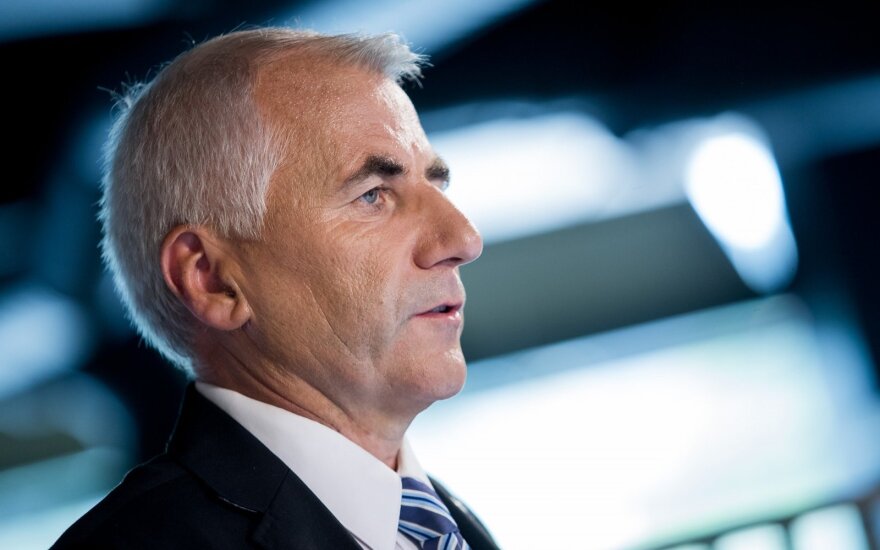 In presidential elections, as in cycling, some participate to compete for victory, while others – so that they would aid others in reaching it. Intrigue over the role that Vygaudas Ušackas may play in the coming race has been raised by speculations arising over the potential composition of his campaign team.

This year, director Arūnas Matelis presented the film Wonderful Losers: A Different World, which tells the tale of cycling race participants, so called gregarios, whose main mission is to aid the team leader in winning. They do so by passing him food and water.

These participants understand their role in cycling sports very well. In presidential elections, Vytautas Magnus University political scientist Lauras Bielinis notes, also have participants like this, even if they do not always clearly grasp they are supporting figures.

Related articles
The real meaning of the Putin – Trump meeting: what the US president could have promised behind closed doors
Vygaudas Ušackas. Echoes of the Helsinki meeting: six steps for Lithuania

"While there are those, who are convinced or act toward those goals – when the candidate they support wins, they receive decent positions, decent offices," L. Bielinis said.

Intrigue was sparked over the role V. Ušackas will have in the presidential race was sparked by information spreading that his campaign headquarters may be led by Kaunas city Vice Mayor Povilas Mačiulis.

V. Ušackas himself neither denies, nor confirms that P. Mačiulis could be his aide in the presidential elections.

V. Ušackas does not deny being acquainted with P. Mačiulis, stating that they are old friends, holding similar ideals.

"When I participate in the electoral campaigning, I will no doubt consider him as one of my potentially closest aides. Currently I have neither declared my participation in the elections, nor have a headquarters and thus have no one to invite," he said.

V. Ušackas has stated that he is planning to participate in the presidential elections and will make his final decision at the end of summer.

He says that he will seek "to be the candidate of all Lithuanian citizens, regardless of party preference."

"If the TS-LKD supported me, I would be grateful. If other parties or movements offer their support, I will also consider it. Questions linked to headquarters and other matters, I will resolve when the campaign begins," V. Ušackas stated.

Delfi was unable to reach P. Mačiulis himself for a comment.

Vytautas Magnus University political scientist Šarūnas Liekis emphasises that talks about P. Mačiulis have yet to be confirmed and are only speculation.

"Quite likely, for now everyone is arranging roles. Some will be main candidates, some will be supports. V. Ušackas may aim at the position of a support," Š. Liekis said.

L. Bielinis does not believe that V. Ušackas would do so consciously.

"Perhaps it will happen to him without him wanting it. Everything's possible. I doubt he is taking this role himself. Knowing his ambitions, his political resources and political history, I would not think that he would be content to be a supporting character," L. Bielinis said.

In his opinion, V. Ušackas is seeking to gather a wide support base, both right-wingers and those, who do not have a clear ideology, but with a clear agricultural platform, akin to V. Matijošaitis' United Kaunas.

On commission from the Delfi news portal, public opinion and market research company Spinter Tyrimai performed a survey on June 19-27, asking respondents, what candidate they would vote for if the presidential elections were next Sunday, which led to surprises. Prime Minister Saulius Skvernelis dropped out of the top three, with V. Ušackas, support for whom remained unchanged, taking third place.

L. Bielinis stated that at the moment it is still early to claim that all the candidates for the presidential elections have been publically identified.

"Until we have a candidate list, we can continue doubting and waiting for a star to descend from the skies," the political scientist said.

Presidential candidate’s initiative described as a national threat: such people should not even be invited to Lithuania