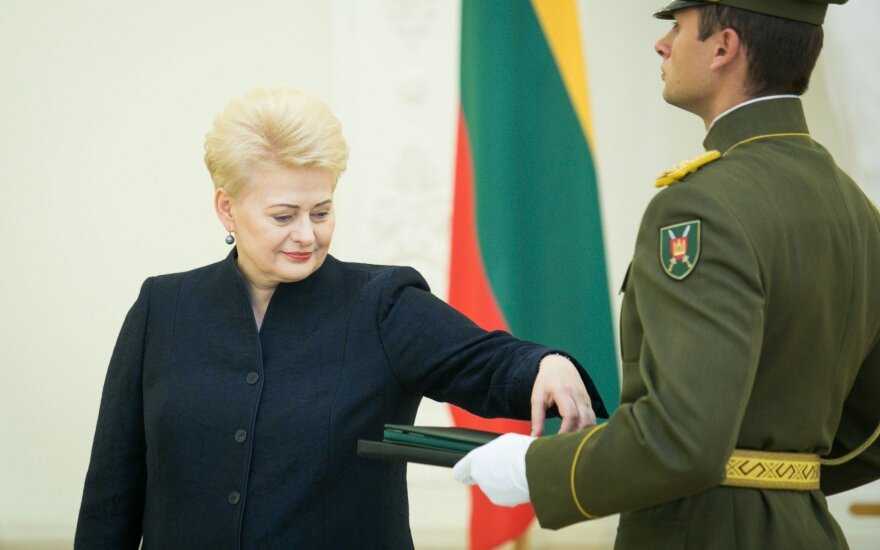 The Zapad exercise displayed that we have to already begin discussing simplified movement of military equipment among EU countries, Lithuanian President Dalia Grybauskaitė told LRT Radio. According to her the so called military Schengen is just one of the questions which will be discussed in the EU summit meeting.

While analysts say that the summit meeting may feature discussions of trade relations with Britain post-Brexit, if sufficient progress is made in negotiations, D. Grybauskaitė denied this, stating that likely such questions will only be brought up at the European Council in December because for now there is much delay, particularly from the UK side. She notes this is due to a lack of proposals for resolving outstanding financial commitments.

Related articles
Bresident off to EU summit to discuss Brexit, EU reforms
EU-Britain talks should move from words to deeds - Grybauskaitė in Brussels

While progress has been made, it has been mostly revolving around the social rights and protection measures for migrants living in the UK, while all other questions are stalling, which removes the possibility of discussing trade deals for now.

The EU summit meeting is also to feature discussions of migration challenges, including difficulties in relations with Turkey. D. Grybauskaitė praises the successes of the response to the refugee situation, pointing to reduced refugee inflows and fewer deaths on the Mediterranean Sea, with the established systems beginning to function and Turkey being subsidised for hosting refugees in its territory. She admits that tensions have arisen between the EU and Turkey and emphasises that it is important to reduce them because in the end Turkey is important as both a NATO ally and a security guarantor for its region.

Regarding EU security and defence, D. Grybauskaitė explains that so-called PESCO cooperation [Permanent Structured Cooperation] is to be discussed during the summit meeting, as well as much attention being dedicated to cyber security.

"I am glad that our proposals, which I presented in Estonia regarding cyber security at the European level have practically already been included in the European Council conclusions. Thus Lithuania's contribution is there, we are being listened to and heard. Our experience is one of the better ones because we have experienced many attacks and manage to withstand them. This is why we are listened to and heard, our experience is valued. Thus I am glad that we have already made a contribution in the area of cyber security," she stated.

Cooperation in military industry and more rapid response to international crises in third countries is to also be discussed. Furthermore, considering the complex challenges portrayed by the Zapad exercise, D. Grybauskaitė emphasises that there is already need to discuss simplified movement of military equipment between EU countries, with it currently being dubbed a military Schengen. She notes that the aim here is not to overlap with NATO, but rather supplement, with cyber security being an area where both Europe and NATO need to dedicate more attention.

The European Council is to also discuss EU priority tasks for the future. D. Grybauskaitė notes that there will be need for more frequent council meetings, with the European Council chairman proposing to hold an extra 13 meetings over a two year span to discuss priority issues. Among these, she pointed to avoiding a new economic Eurozone crisis, issues in the banking and loans systems.

"We are currently at the peak of the cycle where unemployment is declining in the EU, the economy is growing, the Eurozone is forecast growth in excess of 2%. Of course this does not guarantee that Europe is resilient to the outside and the outside is challenges in China and other countries. This is one factor.

The second factor is social segregation in Europe. This will be discussed in Sweden on Novemeber during the social summit meeting. The coming two years will be dedicated to preparations and beginning negotiations on the new EU budget. Lithuania must ensure itself maximum financial support, lose as little of it as possible due to our current development level.

Energy and strategic projects remain among our priorities. They remain important alongside structural agriculture and other areas. Of course we believe that European migration questions will also remain pertinent, both in the agenda and over the coming two years.

Other than various institutional reforms, the future of the EU post-Brexit, there are various interesting discussions and proposals there. But these are now questions of institutional organisation, they impact our people and individual countries less. However it will remain a discussion topic.

Over 350 Lithuanian troops are on Tuesday leaving for Germany to take part in the multinational...

Lithuanian warship to be tested for readiness in Belgium