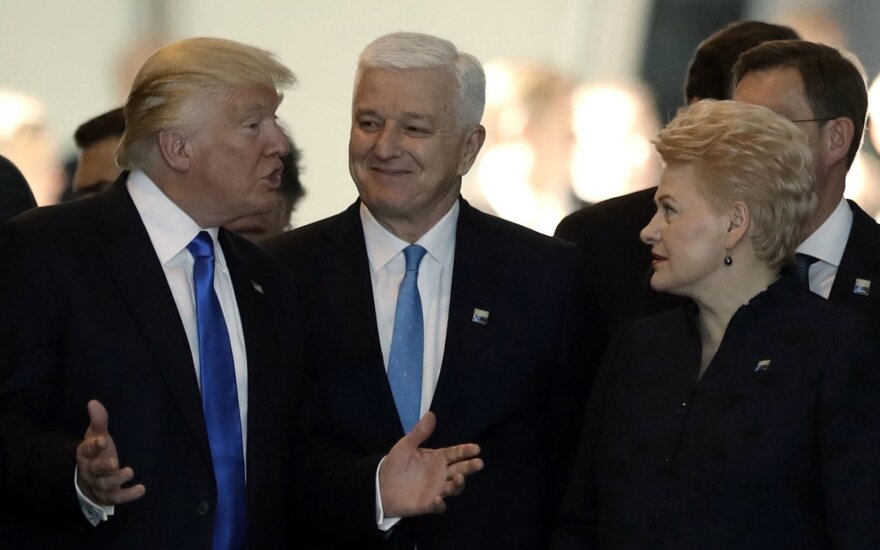 There are high expectations for the Washington visit, which will feature a meeting between the US and Baltic States' presidents, because there will be talks about military, cyber and energy security, alongside other problems, President Dalia Grybauskaitė told LRT Radio. Furthermore, she emphasizes, the upcoming visit to Paris is no less important because military and European cooperation will be discussed with the French president during the bilateral talks, lrt.lt writes.

The meeting with Donald Trump in Washington is described as a highest level summit meeting. D. Grybauskaitė highlights that a meeting of this sort, between the three Baltic States' presidents and the US president, will be happening for the first time. She expects that one of the first tasks will be to pass a joint declaration which would reconfirm the unbreakable principle of collective defence (article 5). The declaration is also to reflect US troop deployments to the Baltics as a deterrence measure.

Beyond this, the president points out that opportunities to ensure aerial, cyber and energy security, among other important issues, will be sought after. "As such, this declaration will portray that strategic partnership and these four states, NATO partners', cooperation remains important to ensure international security. For us it is a deterrence measure and guarantee that given a difficult situation, we can expect direct bilateral support not just via NATO structures," the president stated.

A US-Baltic States forum is to be opened in Washington. D. Grybauskaitė points out that alongside her, 20 Lithuanian companies are represented in the delegation and there will be discussions on points which are of mutual interest to the US and Lithuania – cooperation in the energy sphere, signing contracts with Klaipėdos Nafta and Lietuvos Dujos for cooperation regarding liquefied natural gas terminals. This is to ensure more competitive gas pricing for Lithuania, as well as the security of the gas supply, which will create competitive pressure on European gas supplies. "It is important in seeking to show that our liquefied natural gas terminal grants us added value and the opportunity to be involved in the global gas market," she said.

Military industry is another facet of discussion, with innovative products being an emphasis. The D. Grybauskaitė stated that almost 10% of Lithuanian innovative produce export is headed to the US and there is hope that a number of Lithuanian companies will find excellent trade partners across the Atlantic. This involves not only military industry, but also food industry, laser, financial technology, IT and life sciences.

The Lithuanian president's visit to the United States is also to feature a visit to the US Congress, meeting with House Baltic Caucus representatives, including the group's head, Congressman Šimkus. The president will also participate in a viewing of the Lithuanian movie Pelenai Sniege [Ash in the Snow] based on a book by Rūta Šepetys, also meeting the film's creators and the author herself. The president pointed out that this is an accent, which will allow the American people to get to know the painful history of Lithuania, the country's identity and struggles for freedom.

"R. Šepetys' book is translated into English and included in US school teaching programmes, thus it helps US people and politicians understand the Baltics, realise how and why we care about freedom and independence so much. The USA never recognised our occupation and in the future such films and books will ensure that the American people will know, who we are, why freedom is important to us and will always support us," President Grybauskaitė said.

The Lithuanian president's visit to France is to be held on the 9th of April and was planned a long time ago. Furthermore, the president highlights that the French president himself has agreed to visit Lithuania. For now, it is the three Baltic presidents, who are visiting because they have important projects in common.

A bilateral meeting will also be held, however and the president emphasises that the new French president generates new momentum for Europe itself, as well as for bilateral strategic partnership, both in military matters and at the European level. The meeting will also have a cultural accent to it, with one of the largest exhibitions of Baltic symbolism being featured in the centenary exhibition at the Musée d'Orsay. The last such exhibition was held only in 1937 and the president believes this shows that the Baltic States' culture is viewed as a part of European identity by France.

Discussions with OECD representatives are also to be held in Paris. Lithuania is seeking membership in the organisation and the president hopes that this meeting will be an affirmation of the conclusion of negotiations. "Yes, I truly hope [that negotiations will be concluded], I am practically going specifically for this. A meeting is planned with the organisation's head Jose Angel Gurria and the organisation's council. A similar meeting was held five years ago in April 2013 where the president presented Lithuania's economic situation, capacities and handling of the 2009-2011 economic crisis, applying for membership.

"Now, five years later, several cabinets later, after many institutions' effort and the Presidential Palace's efforts we have presented a number of laws. We have passed almost 50 pieces of legislation, more than 30 legal acts and made significant progress in combatting corruption, as well as improving state owned company management and business conditions.

The five years were not futile. In Paris I will present the economic situation in our country, plans and perspectives. I am truly hopeful that this will formally conclude the negotiations process and that on May 3 we will hear a ruling on our membership," President Grybauskaitė said.

Trump to meet with Baltic presidents in Washington

The presidents of Lithuania, Latvia and Estonia will meet with the leader of the United States...

US President Donald Trump will show the Baltic nations as a model for other European countries in...