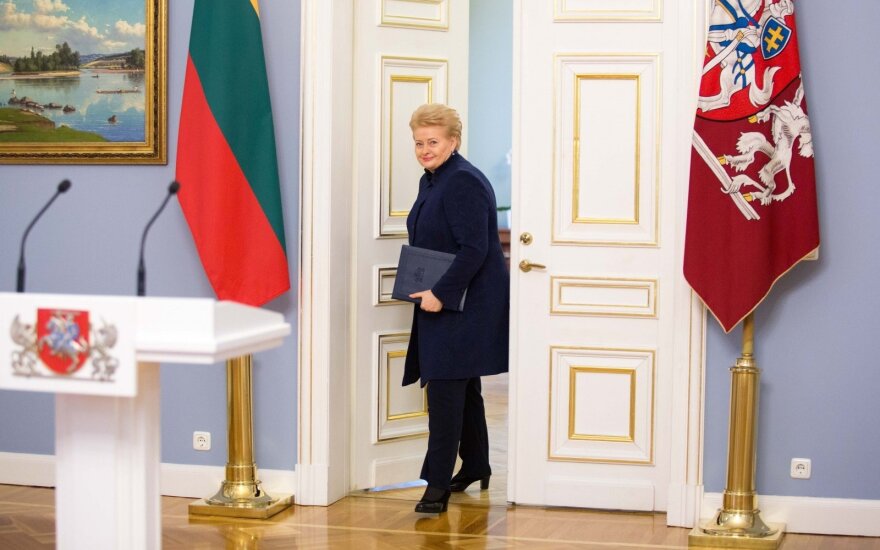 Trying to say what coalition would benefit Lithuania more would simply be guesswork says head of state Dalia Grybauskaitė. “The Lithuanian Peasant and Greens Union (LVŽS) earned the most votes, thus without a doubt they will be the ones to decide and begin consultations on forming a majority,” stressed Dalia Grybauskaitė.

According to her Excellency, no artificial coalition, as time and historic experience shows, survives long. “The winning parties have to come to terms themselves and take responsibility for the government of the state – only such a coalition can last the whole term,” stated the head of state.
The opportunity to form a coalition is available for many political forces, particularly those who received greater support in the new Seimas said D. Grybauskaitė, adding that “Unfortunately the largest and perhaps absolute majority is in the hands of the “Peasants”. For now they have a prerogative to start consultations and form a majority government.”

Related articles
ELECTIONS over – who will govern?
ELECTIONS. Karbauskis on what matters to the 'Peasants and Greens'

According to the President, who will take up the mantle of Prime Minister will depend on which parties form the coalition. “For now I see openness and a willingness to negotiate. Even intentions of discussing future candidacies, but this will be in the future. There is positive sentiment. I sincerely hope that depending on the coalition, we will discuss what PM will be most suitable together. It is however still too early to speculate,” she said.

D. Grybauskaitė was unwilling to comment on LVŽS leader Ramūnas Karbauskis’ statements that the posts of ministers should be filled by experts in the respective fields, not politicians.
“I would rather not comment on separate statements because I believe that everything is taken in absolute terms in the public sphere. At times statements to not fit their essence. I really do see openness and a willingness to negotiate. For now it is too early for specific names [of people who could take minister posts – LRT.lt] because we do not yet have a majority government,” said the President.

She hopes that with the newly formed coalition, an adequate evaluation of current circumstances will be made. “I hope that the new coalition will understand the constitutional balance of the state. When choosing ministers, the President’s capacities to influence proceedings are greater. Demands to ministers remain the same as before – transparency, responsibility and professionalism. This is something I can constitutionally demand,” stressed Grybauskaitė.

When asked whether she can see a coalition government without the LVŽS, the President stated she neither has any interest, nor any right to speculate. “The “Peasants” earned the most trust and forming the majority is their responsibility. Otherwise we would disappoint many of our citizens,” stated the head of state.

This, according to the President, is how a democratic state is. “No-one is to evade responsibility. The people expressed their trust and this means that this political power should take responsibility and form the majority.”