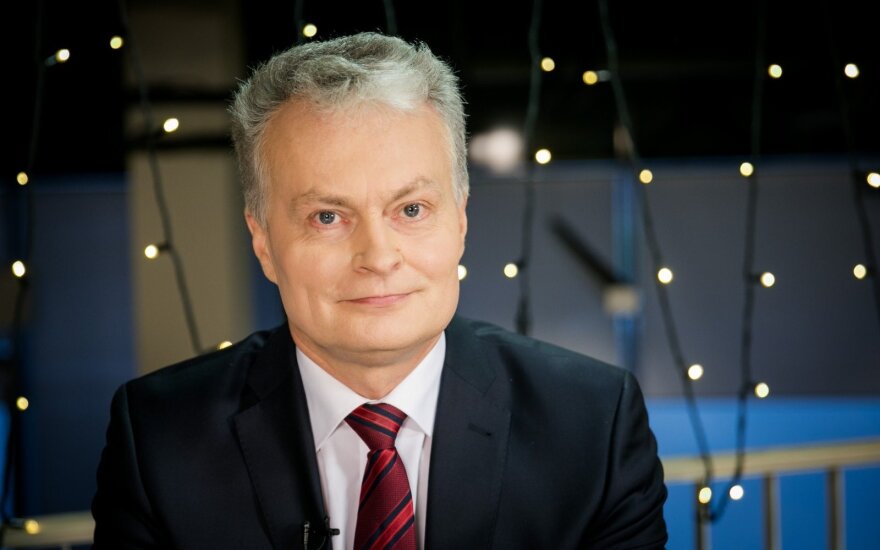 Economist Gitanas Nausėda who is the current leading candidate in the presidential race is adhering to the same lines as former head of state Valdas Adamkus – remain a candidate who is calm, non-antagonising and able to unite society, analyst Tomas Dapkus tells LRT.lt. Nevertheless, he and public relations expert Arijus Katauskas note that there are several factors, which could negatively affect G. Nausėda's popularity.

According to a survey performed by the company Spinter Tyrimai on December 11-19 by commission from the Delfi news portal, if the presidential elections were to be held this coming Sunday, most people would vote for SEB bank advisor, economist G. Nausėda (15.6% of respondents). In second and third respectively we find Prime Minister Saulius Skvernelis who would receive support from 11.3% of respondents and Kaunas Mayor Visvaldas Matijošaitis, with 10.9% support.

What could have led to such results, keeping in mind that up to now the most popular potential candidate to head of state was PM Skvernelis?

Both public relations expert A. Katauskas and political analyst T. Dapkus note that G. Nausėda's ratings were always high and have consistently been rising.

"If we look at public evaluations, G. Nausėda has been in the top five for years, depending on the situation. Furthermore, he is active, visible in media. He is one of the most cited economists in Lithuania. Thirdly – his ratings growth is boosted by our talks of his potential candidacy. The public hears this and begins to present its opinion. It does not need his agreement to participate in the elections – it began to evaluate him immediately," A. Katauskas stated.

G. Nausėda has still not declared whether he will participate in the presidential elections, promising he would do so this autumn. "Will I participate in the presidential elections? I do not have an answer to that question. I think let us wait to next autumn. If I were to decide something regarding this, I do not think I would be the person to spring from a bush. Truth be told, I have been open for the past 10 or 15 years. I would likely not have to explain to the public, who I am," the economist told LRT.lt once.

"This is certainly a well-known figure. He is constantly seen in television broadcasts, talks in them as a calm expert and has been doing so for many years. In essence, he is one of the most prominent individuals in Lithuania. He is not in government, but he is in public – this likely adds to the rise of his popularity," T. Dapkus mused.

Nevertheless, the political analyst adds that such survey results are only preliminary numbers and much will depend on the candidates' electoral campaigns. "It is clear that it is starting before the official campaign. Based on the current situation G. Nausėda is one of the potential candidates who could, as of currently, reach the second round, but much will depend on the other politicians' popularity," the analyst continued.

"Ratings are ratings, but when serious campaigning begins and not just urban voters join up, the situation can begin to shift. One of G. Nausėda's main problems is that he has completely no organisation system which would [...] would allow him to ensure consistent communication across Lithuania," public relations expert A. Katauskas says.

Furthermore, according to A. Katauskas, the "banker mark" is no advantage. "Many things can be blamed on the banking sector – crises and such. Thirdly, G. Nausėda is no major businessperson or so, he is simply an economist, advisor to the bank's president. He has not created jobs like V. Matijošaitis. In principle if V. Matijošaitis is more of a father or a man, who has at least ensured order in Kaunas by his strict hand, then G. Nausėda will struggle to boast of work done," A. Katauskas explained.

The public relations expert says that G. Nausėda can expect more support from urban residents and the elite: "He will not necessarily be appealing for the regions. A suit and shit may appear interesting in these elections, especially considering that in elections so far, candidates of this sort would not make successful appearances."

According to T. Dapkus, if G. Nausėda decided to participate in the presidential elections, he will have to leave the bank at some point. "He will not be able to be a presidential candidate and work in the bank at the same time. [...] But when talks turn to the banks, political opponents will say: you were a person who spoke from the banks' side for many years," the analyst commented for LRT.lt.

Commenting on the results of the new survey, Public relations specialist, board chairperson for the public relations agency Fabula Hill + Knowlton Strategies, Mykolas Katkus reminded Delfi that G. Nausėda is no new participant of potential political processes. "We can recall how in 2004 he was the chief advisor to Valdas Adamkus' headquarters. He has even participated in debates as V. Adamkus' team chairperson. V. Adamkus said that he would support G. Nausėda in his second term," M. Katkus said.

According to political analyst T. Dapkus, G. Nausėda is more akin to former head of state V. Adamkus, rather than D. Grybauskaitė. Apparently he is adhering to the same lines as V. Adamkus – remain a candidate who is calm, non-antagonising and able to unite society: "It is clear that he has taken this line and not that of D. Grybauskaitė, who has a very acute position in all questions," T. Dapkus added.

Commenters LRT.lt spoke to stated that the position of former presidents would matter in the presidential elections.

"The support of all popular individuals is important in various layers, this includes that of V. Adamkus, however I do not know to what extent the former presidents and incumbent will involve themselves in the campaign and whether they will support anyone. It is not just their support that is important, but also that of the parties – who will have the support of the Lithuanian Farmer and Greens Union, the Homeland Union – Lithuanian Christian Democrats, the Social Democrat Party," T. Dapkus explained.

The presidential elections are to be held in Lithuania on May 2019.

Economist Gitanas Nausėda took the lead on the list of potential candidates for president in the...