Poll: Landsbergis and Skvernelis meetings are beneficial but only for one of them 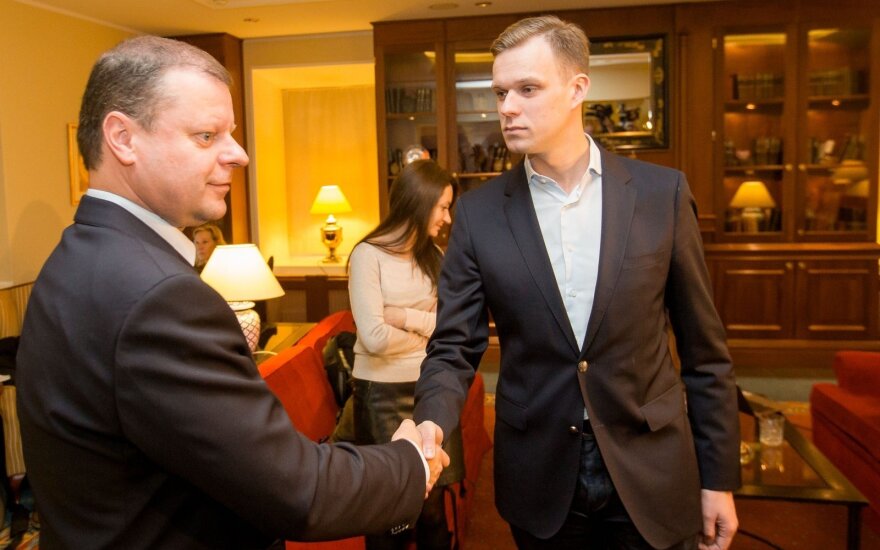 Farmers and Greens Union led by Ramūnas Karbauskis is the most popular political force but its ratings have decreased by a third from the beginning of the year. At the same time the Social Democrats and Conservatives popularity increased.

This data became clear after a survey on Lithuanian people, which was ordered by DELFI and carried out by the public opinion and market research company "Sprinter" on April 19-26.

Related articles
Farmers remain most popular but down by 1/3 since January
SocDems confused: Farmers putting them into a terrible situation

Mažvydas Jastramskis, a professor at Vilnius University Institute of International Relations and Political Science (VU TSPMI) says that naturally, the popularity of Farmers had stabilized after the initial euphoria. However, the popularity of Homeland Union-Lithuanian Christian and Democrats Social is unexpected.

According to the political scientist, Gabrielius Landsbergis, a leader of Homeland Union-Lithuanian Christian Democrat, relationship with the Prime Minister (PM) Saulius Skvernelis might have given points to the Conservatives in the eyes of the voters: Conservatives show that they are a constructive opposition to the Government, they will support the reforms, which match their electoral program.

Direct elections for the chairman might have aided the Social Democrats, which ended on April 22, and Gintautas Paluckas had been elected. However, whether if the rise is a long-term on or short-term one, only time will tell.

Farmers - down TS-LCD and Social Democrats - up

According to a public opinion survey, if Parliamentary elections were to take place next Sunday, 19.9 percent of the vote of the respondents would vote for the Farmers and Greens Union. During the last month the popularity of Farmers and Greens fell by 2.5 per cent but it falls to the scale of possible error.

However, since January the popularity of Farmers and Greens fell by a third, from 30.7 per cent down to 19.9 percent.

"I could see euphoria, which was after the Parliament elections and then the ratings fell. I think that this is the main thing that explains this fall, which was natural. Their rating was heavily inflated because of the strategic balance of people voting in the second round. Now we need to look at further looking trends, if the erosion of ratings will happen after the first fall. Now their rating of about 20 per cent, and I think it might decline even more" said M. Jastramskis.

The second party in popular party is the Homeland Union-Lithuanian Christian Democrats, who would get 14.6 per cent of votes. In a month their popularity increased 3.4 per cent.

According to the political scientist, to him the Conservative rating seems interesting because immediately after the elections the gap between Conservatives and Farmers was huge but is decreasing right now.

"It seems that the game that G. Landsbergis is playing, when he meets S. Skvernelis in part supports and in part criticizes the Government, it is beneficial to him," - he says, although he adds that it might not be long-term.

Social Democrats got good news in April, who have just elected a new chairman and began to raise issues in the coalition. 11.2 per cent of the respondents would vote for them. Their popularity grew by 4 per cent.

"People were interested by the election of the chairman but it's interesting what will G. Paluckas do and how is he evaluated by people" says political scientist.

M. Jastramskis states that the Social Democrats is neutral in the eyes of the public, they are neither very positive nor negative. The Liberal Movement is similar. Therefore parties have a high potential to attract the sponsors.

"Social Democrats have the potential and the future will tell how much the elections for chairman have contributed. I wouldn't be surprised when they recovered to the former level. The fact that they are in the ruling coalition is what is not helping" says the respondent.

Further down the list is the Liberal Movement and their rating fell by 1.5 per cent in the last month and in April reached 5.5 per cent.

M. Jastramskis thinks that the liberals should keep a similar ranking: political scientist doesn't think that the Liberal Movement will lose because of the Eligijus Masiulis and MG Baltic corruption scandal. The Liberal Movement is also considered as a neutral party which is neither liked nor hated by voters.

According to the poll, other parties wouldn't surpass the election barrier. 3.4 per cent would vote for Order and Justice and 2,9 per cent for the Lithuanian Poles' Electoral Action-Christian family union.

But the survey doesn't reflect the exact popularity of the ethnic minority party because the same survey is done in the whole country and the voters of this party are in south-eastern Lithuania.

Other party got the attention of 3.5 per cent even 19.2 per cent wouldn't want to vote at all. However, 14.7 per cent didn't respond to the question.

The popularity of S. Skvernelis has slightly decreased

"Sprinter research" survey data shows that over the month the popularity of PM S. Skvernelis decreased by 3.7 per cent, when people were asked which politician or public figure is suitable to be a PM. Now, S. Skvernelis popularity is 36.9 per cent.

M. Jastramskis says that this decrease is small, since when the popularity is high, a slight increase or decrease doesn't matter as long as it doesn't become a long-term.

S. Skvernelis, is ahead of all other possible PM's in the eyes of the people.

6.7 per cent think that Conservative leader G. Landsbergis is the most suitable to be a PM.

Actions of the Government are seen negatively

Despite the PM's high popularity, actions of the Government are seen negatively.

Positively and more positively are seen by 38.7 per cent.

Negatively and more negatively by 48,4 percent. Another 12.9 per cent didn't respond to the question.

Public opinion and market research company "Sprinter Research" conducted a survey on 2017 April 19-26, ordered by DELFI and did a public opinion survey.

The study included people from 18 to 75 years old. The survey was done in the form of standardized interviews.

The study took place in the territory of Lithuania, in 65 places in orderto represent the entire country. The study had 1005 respondents. The proportional distribution is proportional to the population of the country.

The error of the research results is 3.1 per cent.

Paluckas: there is no relationship with the President