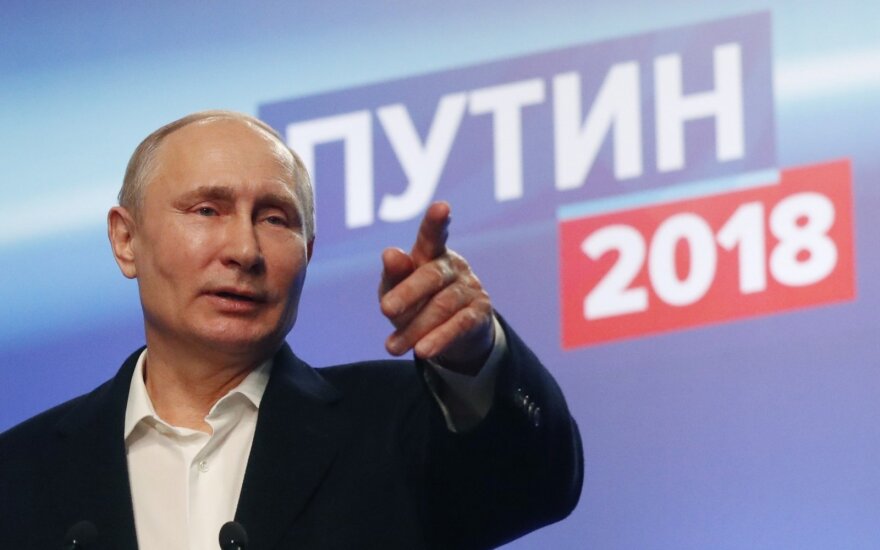 Vladimir Putin has become Russian president once again. This comes as no surprise to anyone because there were no real elections in Russia, just a vote, LRT.lt writes. Can new details be gleaned from this process? What actions should Western states take in response to the poisoning scandal in the United Kingdom and the use of a weapon of mass destruction?

M. Laurinavičius is critical of the proceedings in Russia, emphasising that a real election has not been held in Russia since the turn of the millennium. Instead, he describes it as a masquerade, a vote with no choice involved. Instead, the expert notes, it is far more important to understand the back stage dealings going on, how the regime does certain things and how it acts abroad.

Meanwhile A. Kubilius references an article released by Russian publicist Irina Pavlova, where she urges the West to face reality in that Russia has no democracy, not even the sovereign democracy, which V. Putin often evokes. Instead, what the article's author describes modern Russia as is modernised Stalinism and it is only possible to proceed after acknowledging such a diagnosis. A. Kubilius was also unsurprised by V. Putin's victory and furthermore believes that even with V. Putin's eventual withdrawal, nothing would greatly change. Under such circumstances, the politician observes, we should shape our own position and consider how we can contribute to the West's stance.

"This time the elections were even more brutally organised and even briefer. In earlier elections there would be at least a competitor – the young candidate Mikhail Prokhorov, who accrued a significant vote in the cities, protests occurred after. Now nothing of the sort happened," G. Kirkilas stated.

L. Linkevičius concurs with the previous statements, pointing out that "When elections happen, usually there is a choice being made, but when the choice is practically of just one candidate, you cannot call it elections. Both the judiciary and the news media is under control. Democracy is also being controlled, the freedom of assembly is restricted. Many observed that there were urgings not to have a transparent electoral campaign, for it to be democratic and transparent, but to invest in voter turnout because it was to be a display of numbers. Furthermore, many noticed that the elections were organised on the day of the Crimean annexation. This displays a certain arrogance, demeaning international law and taking pride in it. It is hard not to observe such things."

In terms of the recent poisoning of Sergei Skripal, which echoes the murder of Alexander Litvinenko twelve years ago, L. Linkevičius states that conclusions must be drawn regarding such acts and that many eyes were opened by the act. Unfortunately, Linkevičius laments, this only occurred through personal, national experience, despite this having been a Lithuanian talking point ten, five years ago.

Now, however, Lithuanian warnings no longer fall of deaf ears, the minister notes, adding that an understanding has developed that Lithuania is not agitating for aggression or increasing confrontation, but instead for consistency. This comes as a result of events such as the Russia interference in the French elections, the MH17 catastrophe and now the recent poisoning of Skripal, with questions being posed in the UK, whether the response to A. Litvinenko's death was adequate.

"Everyone is beginning to grasp that Russia is seemingly testing how far it can go, what it can do and at what price. There will be much talk of this. Much more than before," Linkevičius said.

Once again, M. Laurinavičius finds the attempted poisoning of Sergei Skripal to not be any surprise. The analyst compares the Russian regime to a criminal, pointing out that any criminal investigator will agree that if a criminal is not arrested and prevented from committing crime, they will certainly continue, with the crimes escalating. While Laurinavičius does not believe that the poisoning was directly ordered by V. Putin or the top echelons of the GRU, the regime nevertheless is to be held responsible. As for how all this came to be, the expert has two theories: either groups, which oppose V. Putin's policies and want to take him hostage through this event, are to blame or it is a mafia style settling of accounts. Potentially both cases.

Regardless of which variant or even if it is both, M. Laurinavičius emphasises that the end responsibility is the official government's. G. Kirkilas also adds that the events are even more frightening than the murder of A. Litvinenko because, as he describes it, a weapon of mass destruction was employed in the attempt.

When asked how he understands punishments in the context of the UK expelling 23 Russian diplomats and Russia responding with the closure of the British consulate in St. Petersburg in addition to expelling an equal number of UK diplomats, A. Kubilius states that he is uninclined to believe that the poisoning was carried out without the agreement of V. Putin, adding that, "As for talking how to punish, I would believe that the West should answer the question of how V. Putin's regime and North Korea differ. Russia threatens with its nuclear arsenal even more, makes use of chemical weapons. So how are the two different? Russia is even more dangerous.

M. Laurinavičius disagrees with such a view, stating that a difference does exist, with whatever North Korea being, it is not a mafia state, which uses criminal elements to pursue its goals unlike V. Putin's regime.

G. Kirkilas emphasises that in the current circumstances it is necessary for all EU and NATO states to stand united, with such a response being the most serious and the most feared. The politician points out that this is evident from statements by Sergei Lavrov.

Kirkilas expresses hope that these events have opened eyes in the West and states that Western Europe should not only think how to punish Russia, but also how to form long-term policy toward such a Russia. "This involves not just sanctions, but also strengthening of NATO forces. In my opinion, we need a joint Western defence from total lies and disinformation, cyber-attacks, "dirty" money and such. This does not exist yet. Another important matter – Europe's energy independence. Furthermore, we must consider how we can aid Russia in eventually climbing out of the situation it is in now. The West should create a belt of successful states around Russia, starting with Ukraine. This is the sort of strategy that should be understandable for the West and would be implemented with a perception of long-term prospects.

Ministers of foreign affairs of Lithuania and seven other European countries said on the 4-year...