BNS
aA
Polish President Andrzej Duda will begin his three-day visit to Lithuania this week by meeting with members of the local Polish community. 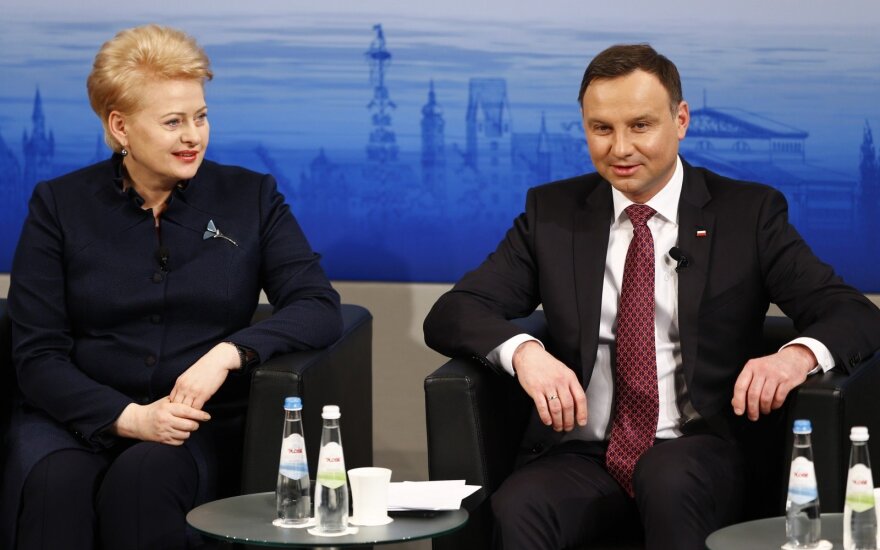 The meeting is scheduled to take place at the House of Polish Culture in Vilnius on Thursday evening, Andžej Pukšto, a member of the board at the Polish Discussion Club, told BNS on Monday.

Duda, along with other regional and EU leaders, will attend Lithuania's centennial celebrations on Friday and will meet with President Dalia Grybauskaitė to discuss bilateral relations on Saturday.

Around 200,000 ethnic Poles live in Lithuania. Poland had frozen top-level visits to Lithuania for the past five years, accusing Vilnius over the situation of the Polish ethnic minority.

However, the bilateral relations have been warming up in the past year. Marek Kuchcinski, the Marshal of the Sejm, the lower house of the Polish parliament, visited Lithuania last September and Polish Prime Minister Mateusz Morawiecki is expected to visit Vilnius in March.

Lithuania needs Poland's support in synchronizing its power grid with the Western European system and in increasing its defense capabilities.

Poland, for its part, seeks support from Lithuania in its row with the European Union over its controversial judicial reform and wants to ensure good conditions for Orlen, the owner of the Mažeikiai crude refinery.

The municipality of Vilnius on Wednesday named a street in the capital after Polish President Lech...

Lithuanian president, in Davos, defends Poland in row with EU (1)

Lithuanian President Dalia Grybauskaitė on Friday came to Poland's defense in the neighboring...

G. Kirkilas: we must make good use of the Lithuanian-Polish relations‘ renaissance

Polish PM to visit Vilnius in March amid improving ties

Polish Prime Minister Mateusz Morawiecki is expected to visit Vilnius in March in a sign of...

Residents of Lithuania believe the country should maintain the closest relations with Poland and the...