Poland and EU at odds: an uncomfortable position for Baltic States

(1)
Jeroen Bult, LT Daily
aA
The return to power of the PiS, the self-proclaimed Law and Justice Party, in Poland has become a real headache for EU policy makers much earlier than even pessimists had dared to predict. 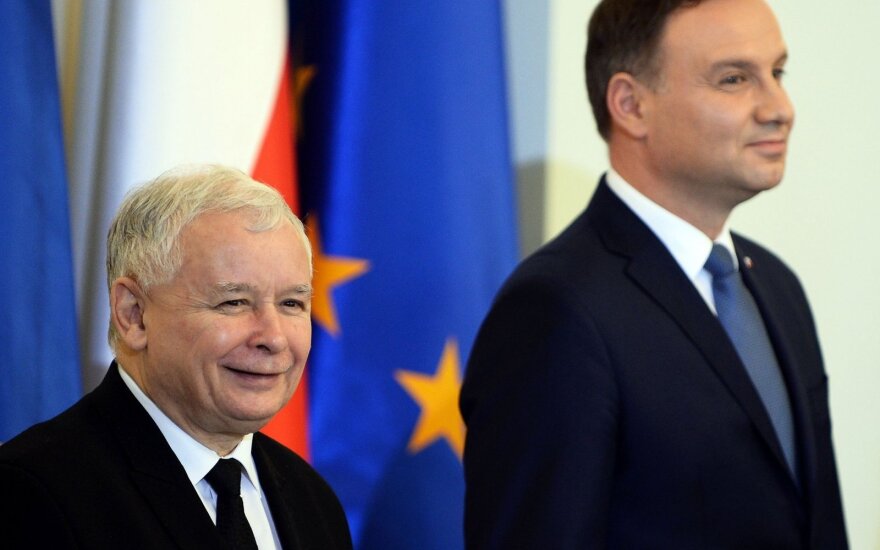 Warsaw and Brussels have engaged in a war of words after the Szydło Government, undoubtedly encouraged by the man who many regard as the power behind the throne, Jarosław Kaczyński, launched a range of controversial reforms of the Constitutional Court and Poland’s public broadcasting service.

On the website of The Guardian, renowned British historian and Poland expert Timothy Garton Ash, eyewitness to the rise of Solidarność in the early 1980s, even warned that Poland “is in danger of being reduced to an illiberal democracy. Basic pillars of its still youthful liberal democracy […] are suddenly under threat.”

Leave aside the question of whether that conclusion is justified or not, Garton Ash also writes that “the voices of all allied democracies, in Europe and across the Atlantic, must be raised to express their concern about a turn with grave implications for the whole democratic West”.

The European Commission has heeded this advice: on 13 January, Vice-President Timmermans announced that the Commission “will carry out a preliminary assessment on this matter under the rule of law framework”. But have all ‘allied democracies’ indeed raised their voices and endorsed the assertive approach of the Commission?

Germany has, much to the delight of the PiS spin doctors and propaganda experts, who seized upon the opportunity to revitalize old conspiracy theories: “Again, they want to control Poland”, Wprost magazine warned on its cover, sympathising with the new Government, just above an illustration of ‘Führer’ Angela Merkel and four other ‘EU Nazi’s’). 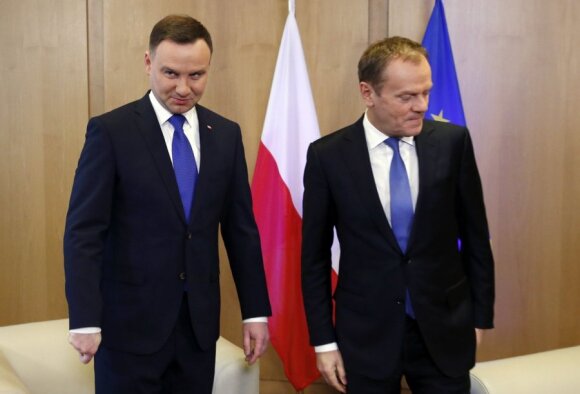 In Central and Eastern Europe, on the other hand, silence about the illiberal tendencies welling up in Poland has prevailed. Viktor Orbán, Hungary’s authoritarian PM, already met up with his soul mate Kaczyński, in a cozy guesthouse near the Polish-Slovak border.

Orbán, eager to shake off his pariah status within the EU, and Kaczyński discussed the common European asylum policy i.e. the system of mandatory redistribution quotas for refugees, which they both vehemently oppose.

Their ultimate goal might be the creation of a broader, obstructive ‘Visegrád front’ in Brussels. It remains to be seen, whether such a strategy will really work since Slovakia strongly distrusts Orbán’s deployment of nationalist, irredentist rhetoric and Poland has not been pleased with his Putin-friendly stance. With the Czech Republic one of Europe’s most secular countries, it will not feel at ease with Kaczyński’s dream of a Catholic-fundamentalist revival.

Where does this leave the Baltic States? Estonia, Latvia and Lithuania have taken a lower profile in the refugee debate compared to Poland and Hungary. On the one hand, they definitively perceive the prospect of an influx of asylum-seekers from the Middle East as a clear threat to the ‘põhirahvus’ (‘core nation’), as the Estonians put it. They, especially Estonia and Latvia, are still coping with the presence i.e. integration of the ‘asustuskolonistid’, ‘the colonists, who have stayed in the colony [after 1991]’, using Estonian philosopher Rein Ruutso’s description of the Russian-speaking immigrants who arrived on Baltic soil in the Soviet era.

On the other hand, the three republics are aware that a Kulturkampf on the immigration issue within the ranks of the EU will be detrimental to their national security. Poland, the only major political and economic player among the ‘new’ member states, isolating itself from the Brussels institutions, Germany and France, will surely affect the porous Russia dimension of the EU’s Common Foreign and Security Policy (CFSP).

“A Poland that is both anti-Russian and anti-European is a dream come true for Kremlin strategists,” warned a leading Polish security analyst in the latest edition of the magazine New Eastern Europe. It is hardly surprising, therefore, that Kremlin mouthpieces RT and Sputnik have tried to fan Poland-related discontent in the EU.

It appears that the Warsaw-Brussels conflict poses a serious problem for Tallinn, Riga and Vilnius. Poland is their political, economic (infrastructure and energy) and military bridge to continental Europe and an indispensable ally in the diplomatic power game with Russia (maintenance of EU sanctions, Eastern Partnership and other forms of closer cooperation with Ukraine, Georgia, Moldova and Belarus, including stationing of NATO troops and equipment). Yet, a political Alleingang of Poland and a political-ideological fragmentation of the EU will eventually undermine their position vis-à-vis Russia.

“Before the War, the Poles failed in this role, they became a buffer state between Germany and Russia,” he recalled. Germany has meanwhile become an exemplary democracy and a dedicated advocate of European and international cooperation, but Plečkaitis admonishes that Poland might relapse into a habit it already displayed during the Interbellum period: overestimating its own economic and military capabilities.

“For Lithuania and the other Baltic republics, Poland is a useful [partner], when it is an active EU member, playing together with the other European countries, not against them,” he said.

The Lithuanian-Polish relationship constitutes a special case, because of the complex historical-cultural interaction; the position of the Polish minority in the east of Lithuania has frequently disrupted bilateral tensions, even under Poland’s previous liberal-centrist Government. Polish President Duda (PiS) still has not paid an official visit to Vilnius. Instead, he made his first foreign trip to Estonia – a grave diplomatic affront to Lithuania, one could argue.

The Estonians, for their part, have made desperate attempts to maintain smooth relations with the PiS-dominated Poland (last month, President Ilves attended a conference in honour of the foreign policy legacy of his late Polish counterpart Lech Kaczyński, while at that moment Jarosław had already given the green light for demolishing the independence of the Judiciary). Foreign Minister Kaljurand, Ilves’ possible successor, advised an Estonian journalist “not to draw any conclusions”.

It is reminiscent of the 1920s and 1930s, when Estonia tried to cultivate solid ties with Poland at the expense of cooperation with Lithuania and Latvia. 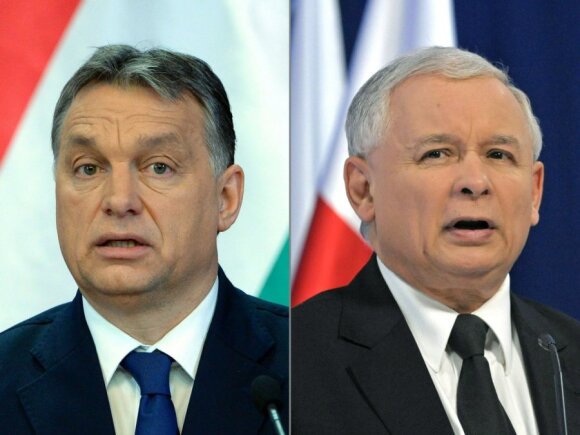 In an article on the ERR (Estonian public broadcasting) website, Andres Herkel, a long-term conservative member of the Estonian Parliament and a defender of dissidents in Azerbaijan, Cuba and Tibet, admitted that an overt confrontation between Brussels and ‘Eastern Europe’s most powerful state’ is most unwelcome and would be detrimental to Estonian foreign policy. Herkel stresses, however, that the political situation in Poland is not entirely comparable to the Hungarian one (which, apparently, he finds more worrisome). PiS only received 37% of the vote in Poland, opposition parties are in a less desperate state than those in Hungary and the Polish minorities in the region are not sizable enough to evoke permanent crises within adjacent countries - one of Orbán’s specialties.

This may be true, but PiS will hold an absolute majority in both the Sejm and the Senate till 2019. What will Estonia, Latvia and Lithuania do if the confrontation really gets out of hand and the monitoring procedure by the European Commission results in Poland’s voting rights in the EU institutions being suspended? Will their unremitting criticism of the poor state of the rule of law in Russia lose credibility, if they deliberately ignore the erosion of the rule of law in Poland?

“A member state of the European Union has joined the company that, until recently, only consisted of Azerbaijan, Rusland, and so on,” wrote Andres Herkel, explicitly referring to Hungary, in Sirp magazine in August 2014, shortly after the Estonian Government announced it would close down its Embassy in Budapest.

Will Tallinn play down Kaczyński’s self-proclaimed ‘accomplishment of the revolution of 1989’, because he, contrary to Orbán, does not intend to conclude energy deals with Vladimir Putin?

It is high time uncomfortable questions of this kind were given real thought by Baltic policy makers. Unfortunately, Jarosław Kaczyński probably could not care less about the outcome.

Jeroen Bult is a Dutch historian and publicist, specializing in Estonia, Latvia and Lithuania.