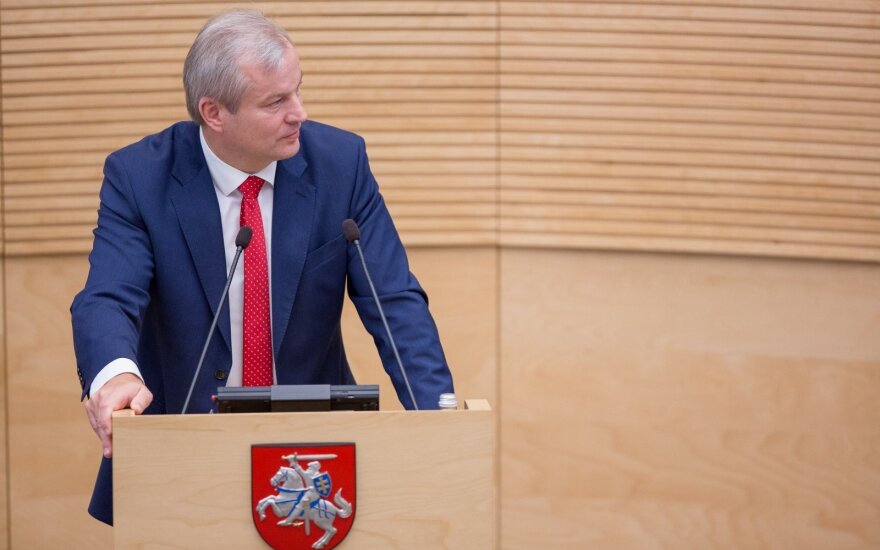 Social Democrat Mindaugas Bastys was refused to be granted access to classified information due to his suspect relations with individuals linked to Russia. In other words the State Security Department (VSD) suspects that due to his relations the security of Lithuanian state secrets is not guaranteed.

The VSD permission to access classified information was necessary for him as Seimas vice Speaker. After the VSD‘s statement was released, M. Bastys resigned from the post of vice Speaker, but is not planning to withdraw from Seimas. The opposition Conservatives have decided to call for the politician to be impeached. Below are presented the suspect contacts and their brief background.

According to VSD information J. Kostin was born in Ukraine in 1950, lectured in Cuba in 1981-1984 and India in 1990-1992. Up to 2006 he worked in the Vilnius University where he headed the Russian Philology department. According to the VSD, Kostin maintains contact with the staff of the Russian embassy in Lithuania, has close links in Russia.

His brother Aleksei is the head of the Moscow State Institute of International relations department of private and civil law. The institute was established next to the Russian Ministry of Foreign Affairs. A. Kostin is also the International Commercial Arbitration Court presidium chairman, the judge of the Gazprom commercial arbitrage and the deputy chairman of the Russian Centre of Arbitration and Mediation.

According to the VSD, J. Kostin has been involved in a number of Russia related business schemes:
- In the year 2000 he established and led the Baltic Russian Institute branch of the Baltic International Academy (the academy’s license was revoked due to constant breaches of conduct);
- Was a strategic consultant for Gazprom mediator Dujotekana, maintains contact with P. Vojeika;
- Represents the Russian state nuclear energy corporation Rosatom in Lithuania (which is building the Astravyets nuclear power plant in Belarus, deemed unsafe by Lithuania).
M. Bastys knows J. Kostin since 2001-2002 according to the VSD’s information, their contact appears to be constant and the member of parliament has gone to the unveiling of J. Kostin’s book in Moscow.

In 2001-2002 J. Kostin requested for M. Bastys’ support in establishing the Baltic Russian Institute branch in Lithuania, in 2012-2013 M. Bastys, at the request of J. Kostin, organised a meeting between the director of Rusatom Overseas to Eastern Europe Aleksandr Merten and both Prime Minister Algirdas Butkevičius and the Minister of Energy. A. Butkevičius refused to meet, then M. Bastys instead organisaed a meeting with the then Seimas Speaker Vydas Gedvilas of the Labour Party. During the meeting, according to VSD data, the potential to realise Rosatom’s plans in the region was discussed.

J. Kostin also requested M. Bastys to look into the return of land for an unspecified citizen in Trakai, the member of Seimas organised meetings on establishing a branch of a US institute in Lithuania at the request of J. Kostin and also mediated, at the request of J. Kostin, in regard to extending the duration of living permits for Russian citizens Dmitri Jakovlev and Viktor Poliakov.

The same J. Kostin acquainted M. Bastys with Russian citizens Boris Zimin and Dmitrij Zimin, who aimed to move the Zimin foundation to Lithuania from Russia. J. Kostin even requested for M. Bastys’ aid in household matters, such as settling his mother at a retirement home.

M. Bastys was acquainted with the vice president of Dujotekana and former KGB agent by J. Kostin. According to the VSD M. Bastys knew of P.Vojeika’s links to the KGB, but maintained irregular contact that developed on mutual assistance.

- In 2008 M. Bastys requested to provide aid to K. Smirnov’s sports school because he was seeking support from K. Smirnov;
- P. Vojeika requested M. Bastys’ support in resolving Dujotekana’s issues regarding the Kaunas Combined Heat and Power Plant;
- In 2013 M. Bastys requested financial support for his acquaintances, who have not been specified.

E. Mackevičius is a journalist of Lithuanian origin living in Russia, who has a TV show on the RTR TV channel called Vesti. The show presents reports about Lithuania which, according to the VSD, are hostile to Lithuania. The journalist has received numerous Russian state rewards, presented the events in Crimea in a pro-Russian light and claimed that Ukraine is firing howitzers at those wishing to speak Russian in Crimea and crushing them with tanks.

The VSD information presents S. Dubininkas as a former senior figure of the Kaunas mafia, who has started a legitimate business, but potentially still has links to the criminal underworld. He apparently maintains contact with Russian and Belarussian individuals, represents their interests in Lithuania. M. Bastys and S. Dubininkas maintain personal contact, in 2009-2012 he had employed the businessman’s son Mantas Dubininkas as his assistant in Seimas, S. Dubininkas supported the politician during his electoral campaign.

V. Pachomov is the director of Riva Consulting, its managing chairman and owner. The other two management members of the company are Russian citizens Denis Naumchev and Dmitrij Strelov. Pachomov was prosecuted for bribe taking in 1995 when he was an economic crime inspector.
In 2003 the Special Investigation Service (STT) initiated an inquiry on his mediation in bribery, but the case was cancelled due to the expiry of its limitation period.

In 2009 the Financial Crime Investigation Service (FNTT) performed an inquiry regarding fraud, but V. Pachomov was acquitted. In 2014 the FNTT presented suspicions of fraud, fraudulent book keeping and document counterfeiting; the investigation is ongoing.

In 2014 the STT also performed an investigation regarding V. Pachomov’s mediation and abuse of office, the case has been passed to court. In the same year the ST also cast suspicion on the businessman for sale of influence, with the case also being presented to court.