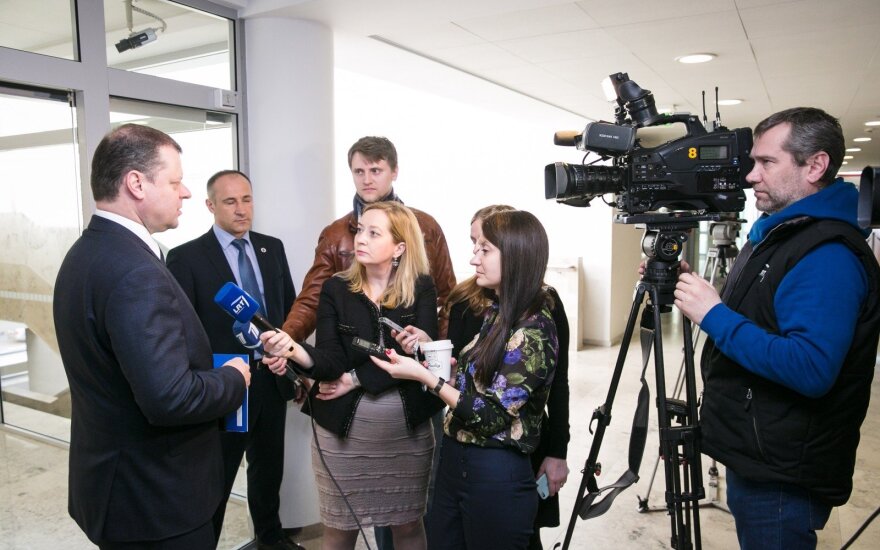 Communication with other parties is creating a new political tradition and a new political culture. The Prime Minister Saulius Skvernelis told LRT radio when asked about possible tensions in the coalition. According to him, the position not only interacts with Gabrielius Landsbergis which the Farmer leader Ramūnas Karbauskis accused of creating artificial tension, but also with other members of the opposition.

- The discussion on the extension of the school year are ongoing. In your opinion, would it be beneficial?

- Every time manage to oversimplify the issue. Now the discussion on the extension of the school year moved to the public space, this is supposedly a panacea - extend or not to prolong. But both the Ministry of Education and our positions are a little bit different.

Related articles
Candidates for SocDem leadership critical of LFGU, won't dismember ruling bloc
What is the real reason behind Skvernelis’ and Karbauskis’ squabbles?

Obviously schools have a situation when our students’ performance deteriorates. The number of those who do not even attain a satisfactory level is increasing. We have a situation where an almost 39-week program is carried out in 34 weeks. This is a stress both for pupils and teachers.

We're talking basically about the essential thing - to do so, that the teaching load would be more evenly distributed and that it would be less stressful for students, and teachers would have more time to lay out a program that would create more time for educational activities, practical, active, attractive training. Finally, in order for additional time to be given for pupils with difficulties, given the timely curriculum.

All of these means are related to the resetting of the duration of the school year, which once was in Lithuania. Finally, accession lath to universities next year is sure to be inevitable [set]. Do students want to remain behind the line to a university with their deteriorating performances?

These are the means to enable and enhance the learning quality, and that it would make a teacher, and the student comfortable, that it would be more comfortable to work. This is due to the reconstruction of the school year, which happened once in Lithuania.

- The Parliament held the initiative, that those who acquire the nationality of a European Union or NATO country, would be preserving and Lithuanian nationality. Last week’s poll shows that a quarter of Lithuanian citizens living in UK might give up their citizenship. The Global Lithuanian community is alarmed and promises to provide amendments for dual citizenship. Would you support these projects?

- I signed, and really supported them. We had a discussion. I think it will find a huge support in the Parliament because we have no other choice. If we want to maintain and have Lithuanian citizens, our people, committed to the homeland, if we want them not to sever the last links with the homeland, who, for one reason or another leave, then we must take this step.

We must find a way to make the move quickly and efficiently. Sometimes we get stuck and think that the only way to solve the problem by themselves are squeezed into a corner, there is a referendum, it is likely that the knowledge and activity, and the fact that a large part of our citizens are abroad and are not currently able to vote via the Internet, this referendum some doubts.

The bill for the Parliament, that was actively signed by MPs, would help solve the issue of dual citizenship and to keep our people, our citizens, our fellow citizens who left the country, so they do not sever the last links with the homeland.

- Lithuanian carriers organized a protest on Tuesday in Vilnius because of several occasions, in their words, rising insurance costs. They say that the trucks are taken back on the roads with no mandatory policy. It is stated that the situation happened because of the lack of competition among insurers. How much are you aware of the situation and what do you think about the carriers' proposals to change the law of civil liability insurance?

- We met with Lithuanian National Road Carriers Association (Linava) representatives in the Government. We talked that this sector is very important to the Lithuanian economy.

One of the problems was that you mentioned - the price of insurance policies. Concerns are expressed regarding the fact that the market is quite small. Not all insurance companies shall prohibit or propose a price, which cannot even be competitive. Basically there are a couple of companies that provide the service, but the prices are really massive and they increased several times.

Insurance Companies argues (which are also referred to “Linava”) - our carriers make traffic accidents abroad, so the damage is increasing and the number of accidents increases. “Linava” voiced an argument that our driver's insurance company does not protect a priori. If there is damage, it is recognized that our driver is to blame.

In this case, payment is made automatically, although “Linava” representatives provided examples that show - if there is an active position and unconditional refusal to pay to defend their interests, to determine the number of events for which the carriers are not our fault.

The problem is clear. The sector was inquired by the Competition Council. There was a set of possible agreements, but there is a proposal to apply to the Bank of Lithuania, which carries this sector, and to look for solutions to answer the question of whether everything is in order from the legal side, whether there is no damage.

The second thing to is promote competition and enable transport companies to insure competitive price so that they can compete because the competition in this segment is huge. If you support it, there is no way to keep our carriers, they will lose the opportunity to compete in the market and this sector will automatically faces a grave future, but it is particularly important to our country.

- The coalition partners the Social Democrats will have a new chairman. It will either be Gintautas Paluckas or Mindaugas Sinkevičius. Will this change, as some say, the fate of the fragile coalition? How will it be affected?

- Probably it will definitely have an impact. What showed in the first round and certainly one of the major political parties, the Social Democratic Party of Lithuania, members sent a clear message that it is willing to go all the way for a renewal and reform.

I can repeat the phrase of a current Chairman - candidates for President are really young, aggressive, energetic people. One or the other is sure to deliver the President (and probably already present) for party community the position of their vision. It may be that there is a variety of reflections on the coalition.

So far, I can only say its position as the fraction of total exposures was entertained. Probably it still too early to do this because the President is absent. Today the coalition agreement is as it is. If they want to change, if they had the desire to change, they should think about certain positions which are expressed by the Social Democrats in this election campaign.

My position is very clear - so far the Government Ministers’ job really satisfies me. I do not see any reason to change the Minister. I have no idea as to the redistribution of responsibilities between the coalition partners, whether there is such a possibility. On the other hand, if the in the desire to have a different contract appears this contract must be terminated.

Now let’s not guess. Farmers and Greens did not consider this issue and has not taken any decisions. Once a Social Democratic chairman is elected, the management of their positions will be set out on what they want, what they like or what they see other possibilities for joint work, then the group, its management and we will talk. Then your position as will be expressed.

So now it is welcomed. I am really happy as a politician, citizen, that the second political party has their leader democratically elected, by universal suffrage. It is likely that this is the first step to a good party renewal and rejuvenation.

- Farmers and Greens Union Chairman R. Karbauskis says that G. Landsbergis is creating an artificial tension. What do you think?

- I think that at this stage we are creating a new political tradition and a new political culture, because we have put “poles” which supposedly prohibit communication with the opposition, you cannot communicate with the other party, cannot have common points of contact, I think it is not good at this time.

With Ramūnas we have both declared and he once said the same that we have to seek the broadest possible consensus in those matters which need to have a strong political will, strong political support. As a result, communication, meetings, discussions are being held with all political parties and factions leaders.

Such meetings really bring benefits when we need to talk about conceptual solutions. I do not think it should be seen as an artificial splitting, if the quality of communication is different. All the more so, as I said, that communication is not only with G. Landsbergis.