Peasants are taking Conservatives and Liberals to a “sustainable Lithuania” 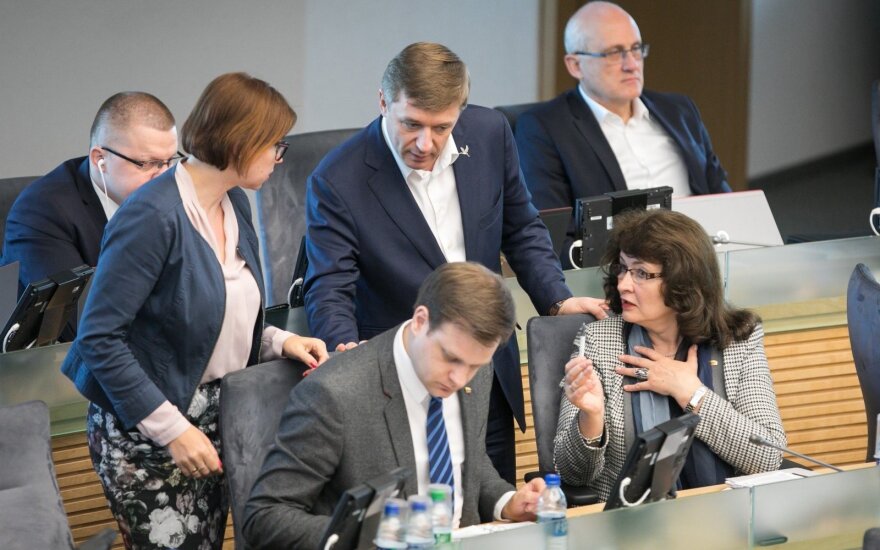 A variety of temporary parliamentary groups have gathered in Parliament – Prayer, Dzūkija buddies, Žemaičiai, Cooperation with scouts and others. The groups of Western Lithuanian regions such as the „Į darnią Lietuvą Vydūno keliu“ (to a sustainable Lithuania according to Vidūnas) which has united parliamentarians of different political views such as Agnė Bilotaitė, Irina Rozova, Remigijus Žemaitaitis, Simonas Getvilas, Dainius Kepinis and etc., whose members could not answer to LRT.lt what is the “Vidūnas’ way ” and generally stated that “in regards to such a talk they would need to prepare in advance.”

Although, there are dozens of temporary parliamentary groups in the Parliament, brought together by common topics of interests and/or a sense to unify the representatives of specific regions. During the previous Parliamentary term there were about 36 groups such as these, currently there are about 30.

A number of such groups are formed on the basis of geographical principals – Džūkija buddy group, Kaunas buddy group, Panevežio buddy group, Šiaulių buddy group and the temporary group „Į darnią Lietuvą Vydūno keliu“.The latter of which unites 24 parliamentary members (half of which are from the LVŽS fraction) – from the municipalities of Klaipėda to Raseiniai-Kėdainiai, which is led by Algimantas Kirkutis a member of the Lithuanian Peasant and Green Union (LVŽS) in the Parliament.

While speaking to LRT.lt A. Kirkutis stated that it was decided to merge the Parliamentary members specifically elected in Western Lithuania.

“Regional policy is one of the most serious policies that s slowly making its way. According to, the regional policy of Lithuania, three parts should be prioritised – East, Central and West. With this idea we have brought together members of Parliament, they supported it and we created this group” – A. Kirkutis explained.

According to, the parliamentarians the group meets up and is debates the issue of Klaipėda University and other important questions to this region. “We are currently preparing a conference regarding the study of Vydūnas legacy to Lithuania’s statehood. Since the author has written extensively on the topics of national identity and statehood. The event will be utilized to commemorate the 100th anniversary of Lithuania” – A. Kirkutis further notes.

The chairman of the group liberal Simonas Gentvilas stated that even before the election it was agreed upon that “no matter who enters the Parliament, it is necessary that a Western Lithuania group would come to pass as a counterweight to the capital.”

“This - the region farthest away from the capital with specific terms, which is why we have come together. The Žemaitijos and Pajūrio regions are also coming together. What have we done so far? We have come together to discuss the economic problems of the Klaipėda region, we have become acquainted with the Klaipėdos port thematic. We have also initiated a single draft for a law which stated that 10 pct. of Klaipėdos State Seaport Authorities profits would go to the Klaipėda municipality regarding the building an outer port in Melnragėje. However, the Parliament has yet to confirm this. There was also a meeting with local businesses, the chamber of Commerce, Industry and Crafts of Klaipėda“– stated S. Gentvilas.

However, for the Parliament stated that it liked the group, as it unlike others actually function: “The western regions group functions unlike many other groups, who meet up, elect a chairman and deputy, then forget that are a part of this group. I must commend A. Kirkutis who actively calls the groups meetings” – he stated.

Moreover, the members of the group responded differently when asked how many meeting they had participated so far – some stated one, while others stated to have been a part of three.

Rozova: I cannot provide you any information

The temporary group „Į darnią Lietuvą Vydūno keliu“unites together parliamentary members of absolutely different political forces. To which Agnė Bilotaitė a member of the Homeland Union-Lithuanian Christian Democrat fraction, Irina Rozova a member of the Lithuanian Polish Election Action-Christian family union, as well as Remigijus Žemaitaitis a member of the fraction “Oder and Justice” all belong too.

The chairman of the group A. Kirkutis stated that for now conflicting opinion and fights are managed to be avoided. “The idea was to bring together not according to parties, but according to the territorial principle. There has been no major conflicts as of yet. If someone does not agree for a university, then they simply do not sign…. Bu there have been none major conflicts. We have not debated so aggressively” – to LRT.lt the chairman of the group commented.

According to, S. Gentvilas parliamentarians in Parliament themselves cannot find common speaking terms, but members of a group are rational and aware of the problems. “To speak about economics is much easier than about education with the Russian alliance. So far we have not touched upon the education topics – here an agreement would be harder to reach” – admitted the parliamentarian.

According to, the conservative A. Bilotaitė we are trying to debate matters regarding the problems of the Klaipėda region, and ideological differences – we can bypass.

“I and I. Rozova are both Klapedietės…. I do not know…. I think that, when we come together on the question of Klaipėda, than we do not feel with differences with ideological matters or differences of opinion. We work with those questions that are dealing with the Klaipėda. I myself was a member of a young parliamentary group. I noticed, that on the question regarding the youths we could communicate, but when we began to discuss ideological matters, it was hard to find compromises.” – stated A. Bilotaitė

However, I. Rozova herself did not find the time to talk to LRT.lt and answer what the ideas of Vydūnas impose to her: “Oh, I cannot give you any information. I do not have the time now. I can’t answers now, I need time to check. There is no time now” – laconically stated the parliamentarian.

According to, the group’s members the idea itself called it to be named on the behalf of Vydūnas which was born on the behalf of A. Kirkučiui. However, not all MPs were able to explain what the Vydūno roads was.

“The philosophy during the meeting was taught by A. Kirkutis. All of was said was acceptable for us. The philosophy itself – more representation of the western regions, fostering and maintaining what we can be of assistance as parliamentarians. The name of Vydūnas was selected by A. Kirkutis and for more details you should ask him” – stated to LRT.lt V. Simulik a LVŽS fraction member in Parliament.

After once again asked by a journalist what Vydūnas means to him personally, V. Simulik stated: “The ideas themselves are attractive for me. The philosophy. Although, I have no personal relations with Klaipėda myself, not friends or family members the region itself is attractive for me. Interesting. Of what I do not know, but communicating with colleagues you broaden your horizon.”
In turn, the conservative A. Bilotaitė stated that she would have though up a slightly different name for the group.

“If I myself were to have thought about it, I would have dubbed it just Vakarų Lietuva but it as decide to pick this topic and we did not oppose it. This was not done on my initiative” – stated A. Bilotaitė.
Moreover, when LRT.lt asked how she herself demes the fact that the tittle contains the word “sustainable” and the Parliament is currently working on the “Sustainable Lithuania” project initially A. Bilotaitė laughed.

“It is of course similar. The “peasants” apparently are trying to utilize their platform ideas. They highlight them all of the time. I was at a meeting with Dainius Kepenis and A. Kirkutis where both of them stressed that it’s their fraction that is doing something, their party…. Things like these can be heard. If we are trying to achieve common goals, it is not necessary to do such things but maybe here we can see their lack of experience their new people that have not participated in politic before this” – stated A. Bilotaitė