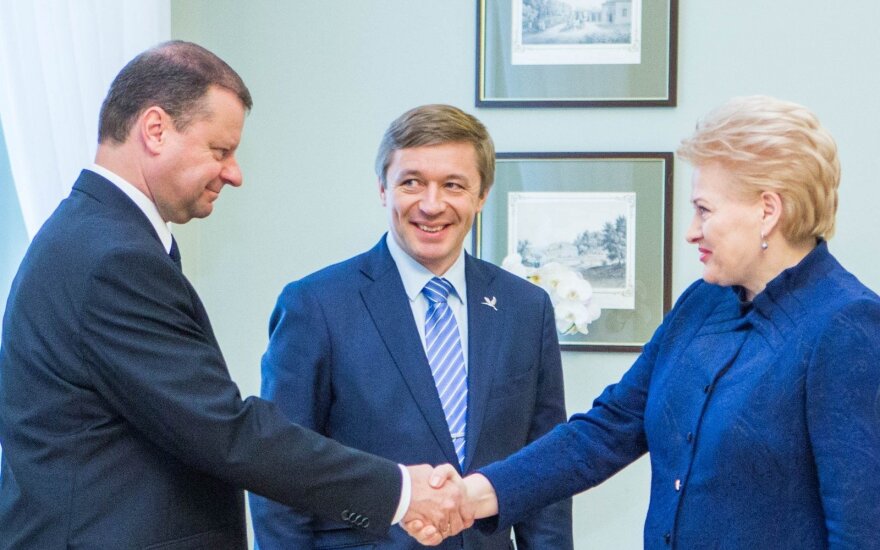 The departing government of Algirdas Butkevičius has poor relations with President Dalia Grybauskaitė. The head of state did not miss opportunities to sting or ridicule the Social Democrat-led cabinet, while the PM himself stated that he had not spoken to the President since the beginning of the year. Poor relations between the cabinet, Seimas and the President were one of the key factors darkening the Butkevičius government’s time in office. The President’s initiative to publicise information from special services prevented access or removed many Social Democrat, Labour Party and Order and Justice politicians from power.

Related articles
Skvernelis on cabinet puzzle – Jankevičius to head Ministry of Interior?
The President and the future PM – has the axe been buried?  (1)

Alfa.lt reviews three scenarios that could proceed in interactions between the President and Ramūnas Karbauskis’ Lithuanian Peasant and Greens Union (LPGU).

The first steps of the new majority government signal that a “reboot” of relations between the Seimas majority and the Presidential Palace may just happen. In her address to new members of parliament, D. Grybauskaitė stated that this Seimas has an opportunity to turn “from a closed and nomenclature-ridden one, to a transparent, open and representative, modern parliament.” Thus the head of state gave indication that the previous term’s Seimas of Algirdas Butkevičius and Loreta Graužinienė failed to satisfy her expectations, but it is too early to discount the new one.

Similar signals are being sent by R. Karbauskis. On the night of the second round of elections, the “Peasant” leader promised to leave the choice of Minister of National Defence to D. Grybauskaitė, while also discussing the choice of Minister of Foreign Affairs with her. Today it is already clear that diplomacy will continue to be led by Social Democrat Linas Linkevičius, who has the President’s blessing.

That said, the Social Democrats have since laid claim to the Ministry of National Defence, proposing Rasa Budbergytė as the new minister, but the “Peasants” themselves reject such a possibility. If the sphere of national defence is truly handed over to Dalia Grybauskaitė, it would mark the appearance of presidential ministries in Lithuania. While such precedents exist in other states, where the president proposes a part of ministers, it would be a new turn in Lithuanian politics.

While D. Grybauskaitė has sympathised with the Homeland Union – Lithuanian Christian Democrats (TS-LKD) in recent years, the “Peasant” proposal of sharing power in Lithuania may prove to be acceptable. It is doubtful whether the Conservatives would hand over control of national defence, while for now the LPGU is signalling that it would be willing to hand over foreign and national defence questions in order to focus on economic and social policy management.

Political scientist Lauras Bielinis who has written a book about D. Grybauskaitė told Alfa.lt that under current circumstances, the President should view a “Peasant” controlled Seimas and cabinet in a positive light because it would mean more opportunities for her to participate in governing the state. Signals in the shape of Karbauskis ir Skvernelis’ speeches, that the Minister of National Defence can be proposed by the President, while they will seek her agreement on the candidate for Minister of Foreign Affairs shows potential for mutually beneficial cooperation.

Furthermore, handing over national defence could be seen as a strategic move by Karbauskis in an effort to shed real or just suspected Russian links.

“R. Karbauskis is handing over foreign policy and national defence to the President because on one hand it is a gesture of friendship toward her. But on the other hand during the campaign there was much talk of Russian influence and links with the LPGU. With such a step, these doubts are cancelled out because decisions on national defence and foreign affairs are redirected to the Presidential Palace,” mused the political scientist.

It would be mistaken to view the relations of President Grybauskaitė and the Seimas majority led by Karbauskis just from the prospects dictated by current circumstances. While both sides are sending positive signals to one another, the final goals of both political players are unclear.

The Presidential Palace was clearly dominant and had the initiative in relations with the Butkevičius cabinet and Graužinienė Seimas, but this was contributed to by an objective weakness of the parliament itself. Two of the three majority parties – Labour and Order and Justice had constant run-ins with law enforcement, while the Social Democrat leader Butkevičius failed to materialise as a strong and decisive leader. This eased President Grybauskaitė’s capacities to raise conditions to the now departing Seimas. Thing look different this time though.

The LPGU majority has around sixty seats in Seimas and control of more than ten ministries. Such conditions make it far more difficult for the President to involve herself in domestic policy because if need be the LPGU and Social Democrat, who harbour no warm feelings for Grybauskaitė after constant criticism last term, coalition could easily isolate the President and leave her with a role similar to that of Algirdas Brazauskas, when in 1996 the elections were won by the Homeland Union, leaving him completely isolated from political processes.

It is likely that the dynamic of LPGU relations with Grybauskaitė will rely on two factors. First of all the “Peasant” capacity to isolate the President will be decided by how their government is received by common voters. If Karbauskis and Skvernelis maintain their current popularity for the next four years, it is likely that they will be less inclined to take the President’s demands into account.
Secondly, the dynamic of relations between Seimas, cabinet and president will be impacted by the 2019 presidential elections, where Grybauskaitė will no longer be able to run for office. If the “Peasants” raise a candidate for head of state and Grybauskaitė supports a different politician, tensions between Karbauskis and the incumbent president will rise without a doubt.

L. Bielinis is convinced that we will see how the President views the “Peasant” majority very soon. Apparently it will clearly come across depending on how much the presidential palace will interfere with the formation of the ministerial cabinet. If the process goes smoothly and ministers are not rejected or tested, then at least initially, the cabinet and the President should be on good terms.
“Much will become clear when we see how the President accepts the ministers of the “Peasant” cabinet. For now she is waiting, while the coalition is coming together, but afterward we can expect a significant role from her,” the political scientist said.

With the conclusion of the second round of elections, D. Grybauskaitė only invited the leaders of the “Peasants” and the Conservatives, giving a clear signal as to what coalition she expects from the winners of the parliamentary elections.

The LPGU decision to not listen to this sign could become one of the sparks for a “Peasant” – President conflict. According to Bielinis, President Grybauskaitė being forced to concede with the LPGU decision to invite not the Conservatives, but the SocDems to a coalition will not cancel out her sympathies for the right. “The President sent a signal – she preferred a “Peasant” – Conservative coalition. But to this day such an alliance did not materialise, she has no other choice, but to accept whatever coalition forms. But in essence she most likely feels that she would have had more influence in Seimas through the Conservatives,” mused the political scientist.
Due to the strong LPGU majority and Karbauskis’ leadership D. Grybauskaitė may find it hard to shift the centres of power that settle in the new Seimas, but this can be assisted by the same factors which could let the “Peasants” isolate the President.

Having won the elections, the LPGU promised its voters a plethora of changes, most importantly that emigration will be inhibited and that incomes will rise. Nevertheless it does not currently appear that the party strategists have a clear plan, how and when the majority of the planned reforms will be implemented. If it so happens that the “Peasant” government is no different from the previous Social Democrat one and the party also faces a string of scandals, the “Peasants” popularity will likely plummet, while D. Grybauskaitė will be able to initiate the formation of a new majority or at least speak to Karbauskis from a position of strength. A large scale economic crisis or a portion of “Peasant” politicians fleeing to other fractions could also give D. Grybauskaitė an opportunity to weaken the “Peasants”.

Nevertheless for now it appears that all the aces are in the “Peasants” hands. How long their current positions last will all depend on how they govern.

It’s not just the images of belligerents that explain the landslide victory of the Lithuanian...