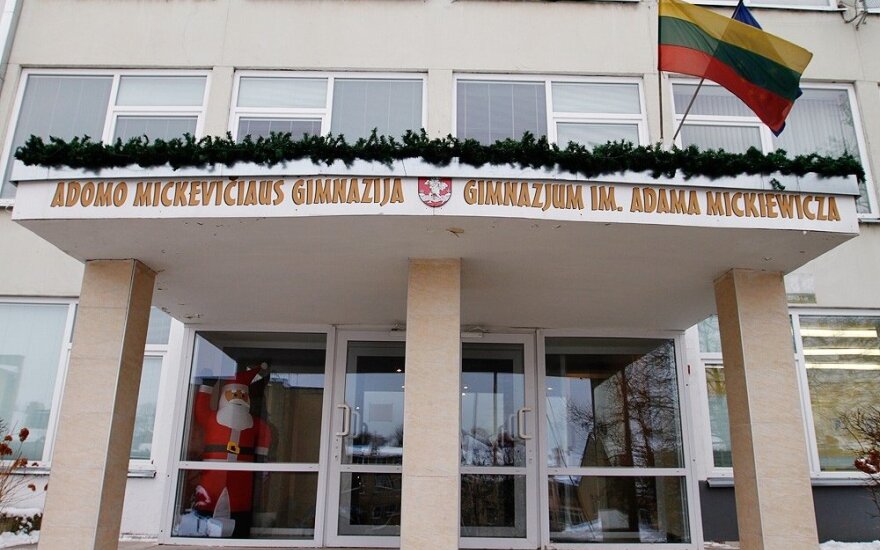 Last week the Vilnius mayor failed to convince not only the opposition, but also the coalition partners to approve the status of long gymnasium for three ethnic minority schools. This will be attempted next week. Such a status change contradicts the Vilnius Council's general education school network reform plan, while the Ministry of Education and Science has warned that such changes could ruin other schools that teach in Russian and Polish.

After the status of Vilnius schools became relevant to the Polish and Lithuanian minister of foreign affairs, the capital's Mayor Remigijus Šimašius warned the coalition partners that the problem could rise up to the level of national security.

A five hour long Vilnius Council meeting on July 26 simply broke down – the quorum was no more, not only the opposition groups refused to vote, but also coalition partners.

There was no success in granting the status of long gymnasium to three schools on that day, the A. Mickevičius and S. Konarskis schools proposed by the Polish Electoral Action in Lithuania – Christian Families Union and the A. Puškinas School proposed by the Social Democrats.

However the Vilnius city administration confirmed a general education school reform plan several years ago and based on it, given the dwindling number of students, certain schools need to be restructured or merged with others.

For example S. Konarskis School is proposed to be restructured into a progymnasium. Upon finishing it, eighth-graders would continue their studies at the A. Mickevičius Gymnasium. The later would not be able to form a fifth grade class starting this year.

This Vilnius school network reform is embattled by the Polish and Russian school communities. There have been protests and court cases, but with no success. Valdas Benkunskas, Vilnius vice mayor in charge of education, says that the reform has to be completed by September, however it was initially obstructed by courts and now – political meddling.

"Upon seeing that the decisions cannot be torpedoed with the help of the courts, once again efforts were made to influence through politicians, imitating some sort of false arguments," V. Benkunskas stated.

Vilnius mayor R. Šimašius pulled up a new argument – the question of so-called Polish schools is important for state national security. In an email to coalition partners he wrote that such a shift was due to a call from Minister of Foreign Affairs Linas Linkevičius. Supposedly "This has been raised at the highest levels in Poland. I will hazard to bring this to a larger scope – I do not wish this to become a matter of our security, if a day of bad relations with our neighbours were to occur in the future," R. Šimašius wrote.

Former Vilnius mayor Artūras Zuokas, who is now in the opposition, doubts whether minister Linkevičius could have spoken along such lines. "I do not believe that Minister of Foreign Affairs L. Linkevičius could have used such arguments that if the Vilnius city council votes for Polish school reform as desired, the Poles will relinquish NATO article 5," A. Zuokas said.

L. Linkevičius admits he has spoken to R. Šimašius, but only regarding the fate of one school – A. Mickevičius School. The minister does not deny that he did so following talks with his Polish counterpart.

"I spoke [with R. Šimašius] on only one question – A. Mickevičius School. It has to be paid attention to, that's a fact because the Polish government is watching carefully," the minister said.

When asked if this could influence Lithuanian national security, he responded that, "If my colleague, a minister, is personally involved, well then how can we evaluate it."

V. Benkunskas assures he received a call from the minister regarding A. Puškinas School as well. L. Linkevičius fellow social democrats propose to reform this school to a long gymnasium despite negative court rulings.

"Minister Linkevičius has called me personally regarding this Russian school, the director of which is his advisor," the Vilnius deputy mayor said.

It should be clarified that L. Linkevičius aide-secretary is Elžbieta Žurovska-Puodižiūnienė, the daughter of A. Puškinas School director Jelena Žurovska. Linkevičius does not deny calling conservative V. Benkunskas regarding the school, explaining that he called to consult what the school's situation is like, what problems it is faced with because it is a minority school. The minister also admits that his aide is the daughter of the school's director, but denied this is at all relevant in this case.

The former Vilnius mayor suspects that R. Šimašius' desire to change the status of these schools is repaying a debt to the Polish Electoral Action in Lithuania (LLRA) for support in voting for the purchase of 150 busses.

"It would appear that the Liberal Movement and the mayor, lacking votes for the odd decision of renting 150 busses, made agreements with other groups for votes, in this case it being the LLRA," Vilnius Council member A. Zuokas said.

Meanwhile R. Šimašius is on holiday and was unavailable for comment for not only journalists, but apparently even municipal representatives.

A city council meeting which should have been held at the end of August is to be moved up to next week, August 16.

At the efforts of the Polish Electoral Action in Lithuania – Christian Families Union and the Social Democrat Party representatives, it will be attempted to change last year's decisions to change the status of A. Mickevičius, S. Konarskis and A. Puškinas schools to long gymnasiums. With enough support, the gymnasiums will then need to undergo accreditation by the Ministry of Education and Science.

"If the municipal council makes the ruling that certain schools have to change the network plans, the ministry will find ways to respond to such a decision. That is to say, how to perform the accreditation procedure so that the schools would legally gain the status of long gymnasium or gymnasium," vice Minister of Education and Science Gražvydas Kazakevičius said.

Perhaps the vice minister has forgotten an official statement from the ministry addressed to the cabinet and Vilnius municipality, which he signed himself? It states that by changing the capital's school general plan and allowing to establish these long gymnasiums, other schools that teach in Polish or Russian could be ruined. The municipality itself has concluded officially that the structure of some of these schools does not match the requirements of gymnasium legislation. Meanwhile the Jonas Paulius Gymnasium which has been demonstrating excellent results (95% of its students go on to study in university) is only gathering half of its contingent. The school headmaster says that the rush to establish long gymnasiums is a fashion which should diminish upon failing to satisfy expectations.

"I would think that this rush to establish long gymnasiums in Vilnius has ended, thank God, and there are too many ethnic minority gymnasiums in my opinion," Vilnius John Paul II Gymnasium director Adamas Blaškevičius said.

According to official data, the number of students studying in Polish in the capital has halved over the past decade, thus at politicians' behest half empty gymnasiums would be maintained at the cost of all Vilnius residents.

Lithuania's Prime Minister Saulius Skvernelis is going to the Polish city of Punsk next week to...

The proposed version will allow original name-spelling with non-Lithuanian characters on the main page...