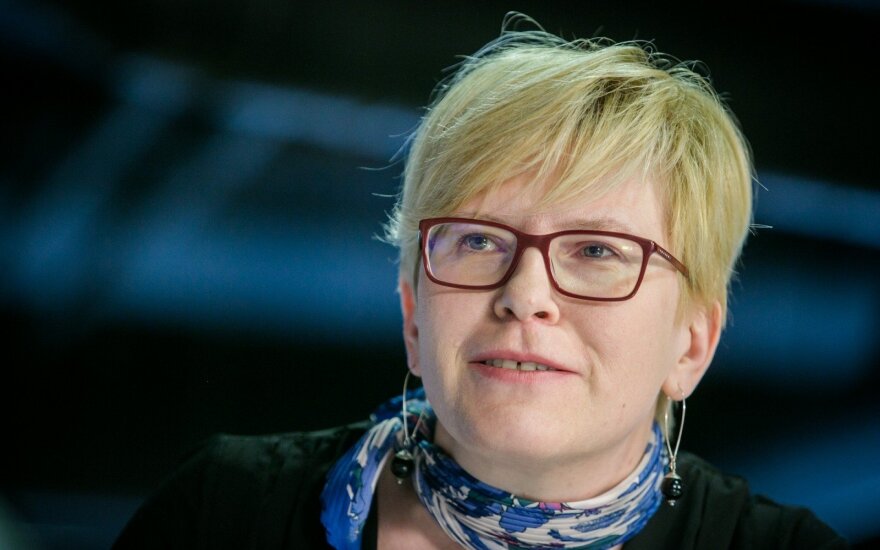 The largest political powers in the country – the Lithuanian Social Democrat Party (LSDP) and the Homeland Union – Lithuanian Christian Democrats (TS-LKD) have begun "celebrating the feast of democracy" and are choosing, who to back in the presidential elections next year. So far, the Social Democrat and Conservatives' favourites feature no surprises, lzinios.lt writes.

It is gradually becoming clearer, who may run for president in the May 2019 elections. The scandal and political corruption struck Liberal Movement has announced it would back Petras Auštrevičius.

MPs Naglis Puteikis, Aušra Maldeikienė and MEP Valentinas Mazuronis have declared their intent to run for president. Public figures have been urging one of the founders of the Sąjūdis, writer Arvydas Juozaitis to run. It is also gradually surfacing, who the Social Democrats and Conservatives will seek to back in the presidential race.

So far, three TS-LKD branches and the Exile and Political Prisoners group have presented nominations for whom the party could back in the presidential elections. Conservatives from the Antakalnis (district in Vilnius) have nominated five candidates: non-partisan MP Ingrida Šimonytė and economist Gitanas Nausėda, MPs Žygimantas Pavilionis, Andrius Kubilius and former diplomat Vygaudas Ušackas. The Kazlų Rūda branch has nominated I. Šimonytė and Ž. Pavilionis, while the Naujoji Vilnia branch – I. Šimonytė and G. Nausėda. The Exile and Political Prisoners group in the party believes that the party should choose between I. Šimonytė, G. Nausėda, V. Ušackas, Ž. Pavilionis and MPs Rasa Juknevičienė and Arvydas Anušauskas.

TS-LKD chairman Gabrielius Landsbergis believes that the candidate nominations should conclude by early September. Then it is planned for the candidates to run campaigns, debates, after which would follow voting, where not only Conservative members would be able to vote, but also non-partisan voters. "Whom the party should back will be up to more than just party members. There will be a registration process, which will last several weeks up to voting. People will register, declaring their intent to express their opinion in the party's primaries and on election day would vote with equal rights to regular members," the Conservative leader explained. Who will be the TS-LKD candidate in the presidential elections should be revealed by November 15.

G. Landsbergis said that he is not surprised by the people his party's colleagues want to see as TS-LKD candidate in the presidential elections. "Most of their names have appeared in public, there are party veterans. It is clear that we have an earnest, normal discussion, the sort we expected, people are considering, who they would like to see leading Lithuania on the conclusion of Dalia Grybauskaitė's term. I see a pleasant democratic discussion. I hope that is how it will remain," he spoke.

G. Landsbergis has his own favourite among potential TS-LKD candidates, but promises to withhold from openly supporting so that it would not influence his party colleagues' opinions. The MP noted that potential left right wing candidates to president can already be guessed at, but it is completely unclear, who will represent the rest, for example the "Farmers". "The name of Prime Minister Saulius Skvernelis is being brought up, but his popularity is not so high that one could expect him to be a serious candidate. It is currently hard to guess. I believe the TS-LKD decision of whom to back will be an important factor because this candidate will be far ahead and I hope will manage to garner a large amount of support," G. Landsbergis stated.

According to LSDP chairman Gintautas Paluckas, the party's 60 branches should decide by late September, who they will nominate as presidential candidate. The party's choice should be revealed at the early November LSDP conference.

Party branches that have already expressed their opinion wish to see European Commissioner Vytenis Povilas Andriukaitis, who runs in almost every presidential elections and MEP Vilija Blinkevičiūtė, who has earlier said she will not participate in the elections, running for president, alongside MP Rasa Budbergytė. However, among potential candidates, there are also other Social Democrats.

G. Paluckas believes that the presidential election results will be influenced by the candidates' personal appeal. However, as the Social Democrat leader notes, the coming elections will not be solely a competition of personalities. "It is clear that these elections are becoming a sort of battlefield between two world views: the one carried by the current majority, that is to say anti-democratic, disrespectful ad on the other side we have the leftists, potential democratic candidates from the centre left. How many of them will run, we will see. However, the circumstances appear to lead to a clash between worldviews and visions of the country's development, rather than directly just personalities. Take how Arvydas Juozaitis, who recently sprung up, is strongly anti-European, would be a supporter of a closed, socially conservative Lithuania. Meanwhile V. P. Andriukaitis is a European in all his spirit, believing that Lithuania should be an indelible part of Europe, rather than a closed national state. There will be interesting developments," he predicted.

While campaigning will proceed within the LSDP, G. Paluckas will not support any potential candidate. "I do not participate in the candidates' campaigning. Differently than certain other party leaders, I make no declarations, do not lay down directives, how who should act. That we make a democratic decision and stand by it is a strength of us, the Social Democrats. Such a culture of democratic decisions appeals to me and I will stand by it," the LSDP leader assured.

The unexpected could occur

According to Vytautas Magnus University professor Algis Krupavičius, the experience of the past few decades shows that the presidential elections are a challenge to "pure" partisan candidates. He believes that the only saving grace of such candidates is when they are able to harness their programme to step over the boundaries of their party's supporters. "On the other hand, they likely need a far longer electoral campaign," the political scientist told Lietuvos Žinios.

Vytautas Magnus University professor Lauras Bielinis believes that any determined candidate to the post of president can be made competitive, if sufficient electoral resources are poured into it. "But I do not believe that the large parties – the TS-LKD, LSDP, Lithuanian Farmer and Greens Union and Liberal Movement will dedicate all their electoral resources to solely the presidential elections. In my opinion the municipal elections are far more important, a victory there could guarantee resources for other – Seimas – elections. As such, I am certain that most energy and attention will be dedicated to the municipalities," the political scientist said.

Meanwhile, the presidential elections, knowing the president's constitutional restrictions and representational function will, according to the expert, not receive exceptional party attention. "The Seimas and political parties have already learnt the "techniques" to hamper a president, halt his or her actions," L. Bielinis emphasised, reminding that all presidents have faced such challenges – from Algirdas Brazauskas, to Valdas Adamkus, to Dalia Grybauskaitė.

According to the political scientist, most of the public is inclined to support real leaders in the presidential elections, regardless of their partisanship. According to him, today we see many intent on running in the elections, but there are very few, who can become real leaders. "I do not know, who I could even name," the expert stated. However, in his opinion, the unexpected could yet occur before the elections. "For example, several weeks ago Arvydas Juozaitis "appeared". The older generation has not forgotten him, view him favourably. He has a certain charisma, energy and stubbornness, thus he could disrupt the electoral campaign, draw votes. Nevertheless, it will all depend on how much resources are dedicated to it, who will back him in the elections," L. Bielinis said.

Lithuanian economist and MP Aušra Maldeikienė , 60, on Monday announced her plans to run for...

Recent scandals in Lithuania over links between politicians and businesses have affected potential...