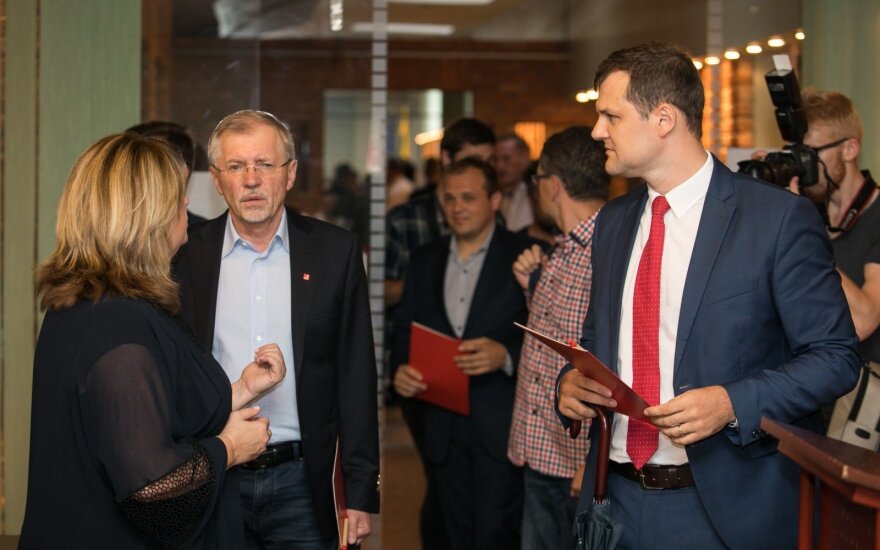 "Personally I am sceptical. I tried talking, sitting down at one table, but I see less and less common vision and consensus in our diverged opinions. This political season's end was the culmination. When you go and seek help from the opposition, instead offering that which the Social Democrats have been seeking. Quite something," the Social Democrat party chairman Gintautas Paluckas said after the party presidium meeting. According to the politician it is time to calm emotions, listen to the opinions of party branches and make the decision, but there are few hopes for the Social Democrats to remain in the coalition government.

While Paluckas does not hide that he is sceptical about his party's future in the coalition, citing that cooperation in the coalition was tense and his party's role – meagre, he notes that it is not up to his personal opinion and will come down to the party branches and council. According to the Social Democrat chairman, the moods become more radical as one descends down the party structure, increasingly in favour of withdrawing.

G. Paluckas stresses that this is not just a matter of party politics, but one of whether the coalition enacts leftist policy that the Social Democrats prioritise. Despite his overall scepticism, the politician was unwilling to presume what the party's choice will be in regard to staying within the coalition or not, stating that, "I will be honest before both myself and the party. I will present both the pros and the cons. I am talking about not just party politics in the narrow sense, even if it is important, but our withdrawal would also lead to a political crisis for the government. We must evaluate the political agenda, what decisions are needed for Lithuania."

"My relations with the Seimas group are certainly excellent. The decision was made in the presidium unanimously and that was the group's representatives, group leaders," G. Paluckas stresses that he continues to hold support within the party and Seimas group and that the internal processes for reviewing participation in the coalition are well under way, with the group prepared to work both in the coalition and the opposition, as needs dictate.

Regarding why the Social Democrats do not benefit from remaining in the current coalition, Paluckas points to the just ended political season and notes that many of the accomplishments were mostly cosmetic, ranging from the Labour Code to higher education reform, to the promised pension increases. He also stresses that the leadership within forestries, despite various insinuations, could be sacrificed for the benefit of regional politics. The issue with it, Paluckas points out, is that the current measures being pursued are opposite to his party's aims, namely centralising and downsizing, rather than enacting devolution.

The Social Democrat chairman points out that while downsizing and centralisation could help raise state earnings, there is also matters of employment and occupation, which could help reduce emigration and reduce the need for public services in the regions. The politician stresses that the practice of state employment is expansive and completely natural in Scandinavia, all based on leftist policy.

Returning to coalition matters, G. Paluckas outlines that without proper communication within the coalition, that is to say if side agreements with the opposition continue, then he has a foreboding that the party council will choose to withdraw from the coalition, something he would find logical and simple. The politician reiterates that while his earlier statements that there are two "Farmer" parties, that of Saulius Skvernelis and that of Ramūnas Karbauskis were a sort of meddling in another group's matters, various support agreements with the Conservatives must end. Paluckas points out that the Social Democrats will bring forth very clear social and economic priorities for 2018-2019 and that while it may not be simple, if a degree of consensus is found, they can work together, but if not, then he questions what purpose the coalition has in the first place.

"Personally I am sceptical. I tried talking, sitting down at one table, but I see less and less common vision and consensus in our diverged opinions. This political season's end was the culmination. When you go and seek help from the opposition, instead offering that which the Social Democrats have been seeking. Quite something," G. Paluckas says. He admits that a brief pause was needed to settle emotions and ensure a rational decision making process which could help avoid political and government crisis. "I am young, but fairly experienced, thus Conservative provocations do not unbalance me," the Social Democrat chairman concluded.

Members of the presidium of the Lithuanian Social Democratic Party (LSDP) plan to meet in Vilnius on...