DELFI
aA
A honeymoon. Thusly political scientists comment on voters’ attitudes to the victors of the Seimas elections, the Lithuanian Peasant and Greens Union (LPGU) whose ratings continue to rise and have currently reached 26.8%. The Liberal Movement’s ratings are also rising, while the Social Democrats’ popularity continues to decrease, while the Conservatives could be said to be stagnating. 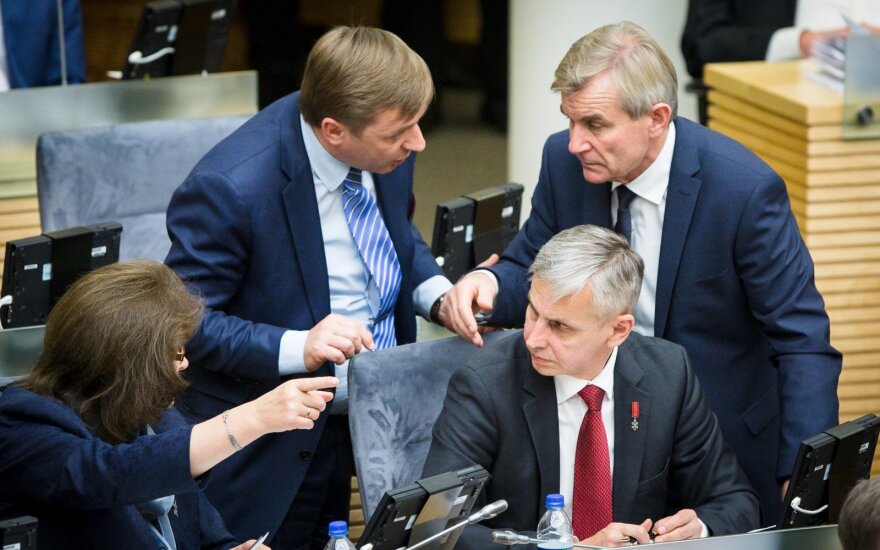 Novagrockienė – a honeymoon for the “Peasants”, a punishment for the SocDems

Professor at the General Jonas Žemaitis Lithuanian War Academy, political scientist Jūratė Novagrockienė says that the newest opinion polls first and foremost signify the correct or incorrect actions taken by the parties in either forming a coalition or remaining in the opposition.

“Growing LPGU popularity is related firstly with them taking a very principled stance. Secondly, all the initiatives taken, for example removing the privilege of providing cars to Seimas deputy speakers and other things have played into people’s sense of justice. The “Peasants” have consistently held to their promises, to what they have pledged and declared in their programmes or declarations. This trend has continued and has yet to have time to be compromised, there hasn’t been enough time for anything to fail or such,” explains J. Novagrockienė.

Regarding the rise in Liberal Movement ratings, the political scientist noted that they gathered more votes than predicted in the elections (the Liberal Movement earned 14 mandates – Delfi). “On the other hand their position is also principled, they are not focusing on pragmatism and attempting to enter a coalition with someone, they are striving to maintain their identity and the purity of their political direction. They aren’t flirting with either the Peasant Greens or the Conservatives. I believe that also assured voter’s attitudes,” said J. Novagrockienė. She notes that the Liberals have a tough spine and this is expressed in, for example, their negotiations with the Conservatives on the post of opposition leader.

She notes that the Conservatives remain where they were. “For now the rather arrogant attitude of their leader and the lack of a stable position has not harmed them. They, as a political party, have failed to gather more points in the short term processes, when the coalition was being formed,” stated the professor.

Novagrockienė notes that the Social Democrats are being punished by voters for losing their face. It is apparently clear to see that their main goal was not to establish some sort of social policy or regain their social democrat identity, which is what their loyal electorate expects. The political scientist believes that pragmatic goals were dominant – striving for power, there were many compromises, yielding to the Peasant Greens over the number of ministers and such. The trade of the Ministry of Social Security and Labour for the Ministry of Economy is brought up as well. It creates impressions that material matters are more important to the party than the people’s welfare. “Failing to maintain individual identity, failure to regain social democrat identity. The SocDems’ behaviour is reflected by their ratings,” she commented.

The expert is not surprised by the Labour Party’s lack of popularity, with the party failing to enter parliament it appears that its decline is now inevitable. Meanwhile Order and Justice have faithful voters, survived through the elections, their ratings are holding up.

“You can confidently say that the “Peasants” are thriving right now, they have support; it is a real honeymoon. For now the voters are not disappointed with those they gave the most votes to. A consistent position is being held – improving the people’s welfare, to ensure justice, that not pragmatic and corrupt politicians would govern, but those who have yet to govern, newer people who are experts in their areas would. This is the basis established, how it will go, we’ll see,” the professor said.

Vilnius University Institute of International Relations and Political Science (VU TSPMI) docent Mažvydas Jastramskis notes that the first post-election ratings are favourable to the election winners, strengthen their positions. This is visible with the LPGU. He reminds that in a 2012 post-election study there were more Social Democrat voters than they received votes in the multi-mandate district.

“It is likely that the part of voters who supported the LPGU in the second round now say they would vote the same again. The Liberal Movement can be seen as a relative winner, it appears that a portion of their potential voters were assured after the elections that the party is capable of passing the 5% vote barrier and are more firm in their stance that they would cast their vote for the Liberals,” the political scientist stated.

The TSPMI lecturer notes that voters show support to S. Skvernelis in the surveys. “It appears that we have a honeymoon effect, it is a typical phenomenon, when a just elected government (the winning party) is more trusted, support for it rises,” he said.

According to Jastramskis, the decline of the Social Democrats is very natural. After the lost elections, unlike the pre-election surveys they no longer have the first choice advantage, when voters who do not have firm preferences lean toward the most popular party.

The political scientist finds the Labour Party phenomenon particularly interesting. It was only recently the largest political organisation in Lithuania, but now it appears that almost no-one wishes to vote for it. “The elections were partly a matter of luck because there was very little left to exceeding the barrier. But now it appears that they are no longer seen as a real alternative,” spoke M. Jastramskis.

Survey takers were asked which politician or public figure would be most suitable to take the post of Prime Minister.

A whole 30.3% of survey takers responded it would be S. Skvernelis. In October the number was 16.9% less.

G. Landsbergis was supported by 10.8% of respondents, while the former PM Algirdas Butkevičius received 7.2% support and Vilnius Mayor Remigijus Šimašius – 5.3%. 4% would want to see LPGU leader Ramūnas Karbauskis in the post, 7.5% less than in October.

“We see that voter ratings are also dictated by the institutional, political elite – S. Skvernelis was proposed as PM, so voters view him as a suitable choice. R. Karbauskis did not show ambition to take the post, so voters have taken note and responded respectively,” commented Jastramskis.
“One of the reasons for S. Skvernelis’ jump in ratings is opinion inertia. If there is a proposed leader for a position and it is confirmed that he will take the position, furthermore adding Skvernelis’ behaviour – non-conflicting, pleasant and such, is forming his cabinet meticulously. He is supported by inertia and will be raised by the status itself, as is with the President and A. Butkevičius, they receive an advance credit for their high post,” spoke J. Novagrockienė. Meanwhile, she adds, R. Karbauskis does not have a high status and is withdrawing into the background himself.

She points out that G. Landsbergis learned to speak well in a short time, to express his thoughts, but he has to get a handle on with who and to who he is speaking.

“Regarding G. Landsbergis, his behaviour, that he failed to enter a coalition with the “Peasants”, perhaps a certain arrogance when he speaks with too much self-confidence. Unfortunately he has excessive confidence, is unable to gauge opponents and competitors, perhaps potential partners for cooperation. For now it is clear the man lacks experience. On the other hand it is also a result of him being unable to take the post that went to Skvernelis,” stated the political scientist.

The Lithuanian Peasant and Green Union (LPGU) has a campaign debt of almost a million euros after...