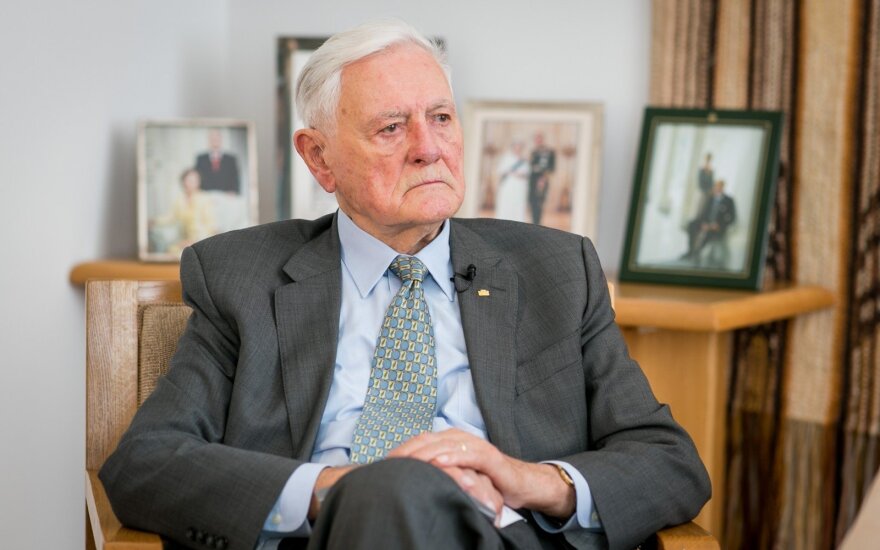 Next week's President Valdas Adamkus International Conference will feature a gathering of influential NATO state politicians and experts. The former Lithuanian head of state has no doubt of the event's success and promises: as much as his strength will allow, he will make use of his experience and contacts for one goal – to mend the fracturing Western unity in namely Vilnius and show defiance against the aggressive Russia.

The second President Valdas Adamkus International Conference "Restoring European and Transatlantic Resilience" to be held in Vilnius will discuss not only strategies of deterring and obstructing the Kremlin, but also will seek ways to strengthen the Euro-Atlantic area, which is currently battered by internal and external forces, as well as how to democratize V. Putin's Russia.

Related articles
Most influential in Lithuania 2018: politicians’ list
August the 7th and Georgia: anatomy of the betrayal of the decade

One of the conference's initiators, former diplomat and member of Seimas, Žygimantas Pavilionis emphasised that during the event, there are plans to ratify a document, which would establish the international community's role in halting V. Putin's aggression and would outline prospects for Russia beyond Putin.

This could describe seemingly any other similar international conference: discussions, a joint communique, but what after? V. Adamkus himself, who will be turning 92 this November, does not conceal significantly more ambitious plans – unifying US and European leaders, regardless of disagreements and personal differences.

V. Adamkus' influence in Lithuania and the world

That V. Adamkus, who finished his second term almost a decade ago, remains influential to this day is revealed by public trust. The former president remains one of the most influential Lithuanian politicians. In the Delfi list of most influential politicians, V. Adamkus retains high positions, being fifth in the elite rankings and second in the public survey.

"I am endlessly grateful to the public for its trust. I can tell that my position on domestic and international politics is likely acceptable to the Lithuanian public.

My stance on principal domestic, foreign and strategic questions has not changes, I have stated a number of times, where I stand and what future I want for Lithuania," V. Adamkus stated. A decade ago, his influence was even greater. And not solely in Lithuania.

According to Ž. Pavilionis, it is namely V. Adamkus, who saved the ongoing negotiations on the Lisbon Treaty, when the Lithuanian president succeeded in convincing the leader of Poland.

Furthermore, in August 2008, V. Adamkus himself overturned the unwritten rule of international diplomacy that the role of a mediator of conflicting states is not for countries of small geopolitical weight such as Lithuania.

Having drawn the world's attention, the then president of Lithuania took international diplomacy steps in Georgia, which was faced with Russian aggression. It is namely V. Adamkus, the leaders of Poland and the other Baltic States, who expressed support for Tbilisi – having taken Georgian territory in the five-day war, the Kremlin aimed at the entire country's independence.

Disappointed in reaction to Russia

This was not forgotten by the Georgians – there is a V. Adamkus boulevard in Georgia and the president is well known to this day. However, V. Adamkus told Delfi that when he stood in front of a crowd of Georgians in 2008 in Tbilisi, just a few tens of kilometres from the troops of the occupying Russian army, he hoped for a different world reaction to the Kremlin's actions.

"Honestly, looking back to what happened, what changed, I am somewhat disappointed in the international community because the results are negative for Georgia. I wanted a resolute stance of the West regarding Russia, but Russia continues aggression on Georgian territories and occupation, the harm has not been undone.

What is worst of all, the world is not even talking of it," V. Adamkus did not conceal his disappointment. He believes that it is namely in his eponymous conference that there will be a return to the question of Georgia's occupied territories because while the West has not formally recognised the Russian controlled South Ossetia and Abkhazia, everyone has seemingly come to terms with it.

Speaking in one voice

"We will raise these questions in the international conference and we hope they will move forward because we cannot stay silent, we ourselves had to endure a period of occupation," the president stated. Ž. Pavilionis echoing him emphasised that the event's guest list is especially serious, thus the questions discussed in the conference should receive attention from the major states.

"Individuals from all the main states are gathering – four congressmen, the US envoy to Ukraine Kurt Volker, the representatives of Germany, France and the UK will come, there will be a large Polish delegation; together with them, we will seek to say that we must recover EU and NATO expansion policies for the East, have a firm policy toward Russia because we are currently only reacting and should instead have a long term position.

It is symbolic to tie the fate of Georgia to this conference because it is specifically here that our friends will gather, who participated in the Bucharest meeting in April 2008.

Back then, presidents V. Adamkus and George W. Bush sought to establish a plan of Georgia's membership in NATO, but the idea was rejected and Russia reacted to this weakness with aggression, first against Georgia and then also against Ukraine, though it was namely V. Adamkus who warned back then that if Russia is pandered to, its next target will be Ukraine – if his words had been heeded, perhaps there would have been no aggression against Ukraine," Ž. Pavilionis stated.

V. Adamkus emphasised that even now when Russia has accustomed itself to speak in ultimatums and act ever more arrogant and aggressive, it is still necessary to talk to it. This, according to the president, is better than exchanging threats forward and backward.

"But we must take a resolute position, emphasising that a free people's choice to free, independent life cannot be questioned," V. Adamkus stated, noting that we cannot speak of giving the Kremlin discounts, it is crucial to continue strengthening economic sanctions against Russia and there is no other way.

"Failing this, I only have hope that we will not experience World War III, for I fear we would not survive it," V. Adamkus stressed. A year ago in a Delfi TV conference, V. Adamkus stated he found European leadership lacking and according to the president, little has changed this year. Nevertheless, apparently positive shifts can be observed already.

"In some countries, a certain strength is felt, they support transatlantic unity, albeit even here there are weaknesses, when there is doubts in the new US administration's stance. Nevertheless, I see it with optimism," V. Adamkus stated, emphasising that it is namely in the conference that the European and US recipes will be sought to be consolidated.

"I hope that at the end of this conference we will be stronger and will say to the Kremlin in one voice: fellows, you will be given no discounts, we are united and strong," V. Adamkus said.

At the same time, he admitted that transatlantic unity has faced many challenges over the past few years: a trade war almost occurring between the EU and US, US President Donald Trump's complaints toward Europeans on their defence financing and other matters, controversial US administration messages policy rousing anti-American sentiment. Not only D. Trump, but all of the US is facing increasingly negative responses in public opinion surveys in major European countries.

Who are the US' allies?

"It is hard to talk about the head of the great world power, he is unpredictable, his actions have not made for a respectable image.

I would like for him to not make certain statements. I am watching the US president's with concern, but I have hope that one person cannot change the stance of an entire state; in this respect the Congress is strong and can rein in D. Trump and his instability," V. Adamkus stated.

Furthermore, in his opinion, such unpredictable actions by D. Trump, who has no political experience, cannot be of benefit to the USA – it is solely a populist stance.

"The US cannot allow itself such infirmness, doubt, inconsistency. Foreign policy is not made based on the day's weather, it must be consistent, firm and exemplary for the entire free world, as it has been to date," V. Adamkus said, noting that this will likely be the first and only term for D. Trump.

Nevertheless, both V. Adamkus and Ž. Pavilionis agreed that the conference will seek to not emphasise the disagreements of US and European leaders, but agree on principles, common ground.

"We understand that America is faced with many global challenges, but in choosing allies, it is important to choose the Europeans: we are united in values and economy.

Of course, there are numerous places where Mr. Trump can teach leadership – in defence financing, deepening sanctions, supporting Ukraine, expanding NATO, this benefits us, thus we will seek to convince that we are friends and allies, while Putin is the enemy," Ž. Pavilionis stated, stressing that Lithuania has shown that it can be an example for the rest of Europe.

"For example, congressman Mike Turner is coming. He was the head of the liquefied natural gas coalition, which enabled exports to Europe.

We already have a terminal, already import gas from the USA, now we must convince other European countries to open up to this market, which would be based on choice and not long term contracts with a dictator, who then uses the funds to fuel his war machine or brain washing in Berlin or Paris," Ž. Pavilionis stated. Meanwhile, V. Adamkus promised that in a decade his eponymous conference would become the place where US and European leaders can find unity despite Russian efforts to break it.

"I am an optimist, I will not yield, however much I have left, I will strive to employ all my contacts, which I have accumulated, working in Lithuania and the USA," V. Adamkus stated.

The August 22 conference in Vilnius will feature influential politicians and strategists from the most important NATO capitals and high-ranking officials from Ukraine, Georgia and Moldova. Dissidents from Russia will also be attending.

Žygimantas Pavilionis. Putin-Trump meeting, do we have the strength to face this challenge?