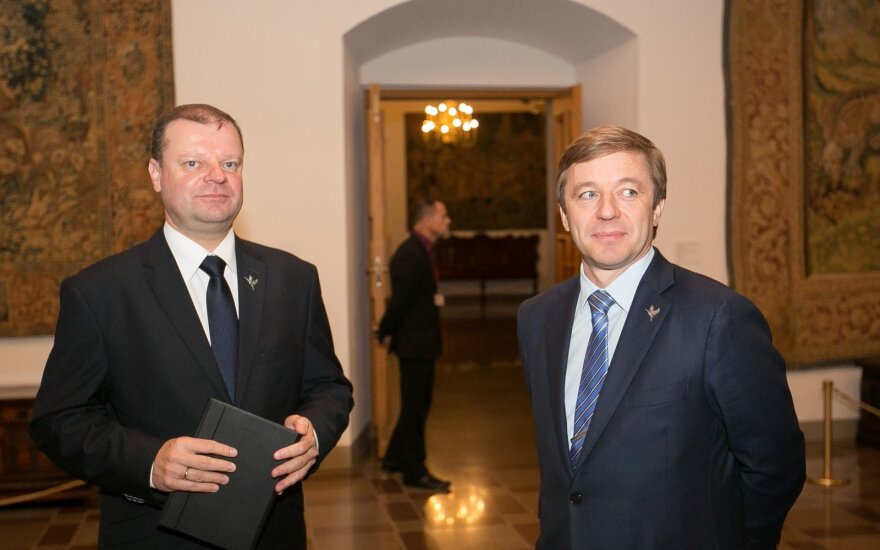 What would the “Peasants” do if in the end neither the Conservatives, nor the Social Democrats joined a coalition with them? Would they attempt to invite the Order and Justice or Electoral Action of Poles (LLRA) – Christian Families Union party, or perhaps independent candidates who earned Seimas mandates?

LLRA representative Jaroslavas Narkevičius, who has worked in the incumbent Seimas and earned a Seimas mandate once again, told LRT.lt that he cannot comment on the potential for the LRA to work in a coalition, stating that “We are not hungry for power, we can work just fine from the opposition.”

Speaking for Order and Justice Remigijus Žemaitaitis was sceptical of his party’s chances of working in the coalition, claiming that “There is no point. I do not believe the “Peasants” will invite us. I am sure that they will either form a majority with the Conservatives or the Social Democrats, they have no other option.”

“Peasant” negotiation representative, member of Seimas Povilas Urbšys stated that neither Order and Justice, nor the Polish representatives will be invited into their coalition. “We hold to the same stance regarding these parties as we did prior to the election,” he said.

However the “Peasants” may invite parliamentarians to their fraction who represent their parties on their own. Among them could be Lithuanian Green Party leader Linas Balsys, members of the Labour Party Valentinas Bukauskas and Petras Čimbaras, Anti-Corruption Coalition of Naglis Puteikis and Kristupas Krivickas leader Naglis Puteikis and perhaps a few others.

“Next week we will invite everyone. After all a Seimas mandate is free. Our fraction contains many non-partisan member of Seimas, working in a large fraction could be far better and more useful than in amixed group of members of Seimas,” said “Peasant” leader Ramūnas Karbauskis.

When asked whether his negative sentiment toward the Labour Party would not prevent working with its two representatives in Seimas, Karbauskis stated he believes that Bukauskas and Čimbaras should make the decision on working in one or another fraction independently. “Who can say today what the future of the Labour Party is?” mused the “Peasant” leader.

Meanwhile V. Bukauskas denied having received any invitations to join either the Social Democrats, or Order and Justice, or the “Peasant” fractions. “However I will make the decision of which fraction to choose with my colleague P. Čimbaras next week, for now I am working as a member of Seimas of the currently concluding term,” he said.

N. Puteikis says that he has not received an invitation from the “Peasants”, but if he did, he believes he would agree.

Having lured in independent members of Seimas, the “Peasant” fraction is expected to contain at least 60 members, including its 56 party members. A constitutional majority is made up of 71 members of Seimas.

When asked what would be done if a minority cabinet would need to be formed, “Peasant” negotiator P. Urbšys said that in such a case parties who choose to work in the opposition would be called on to negotiate on key decisions. “We would try to find out if they could agree with, for example, raising pensions, prohibition of alcohol advertising and other details of our programme,” the politician said.

President vows to put no pressure on Peasants over coalition partners

President Dalia Grybauskaitė says that she will not put any pressure on the Lithuanian Peasant and...