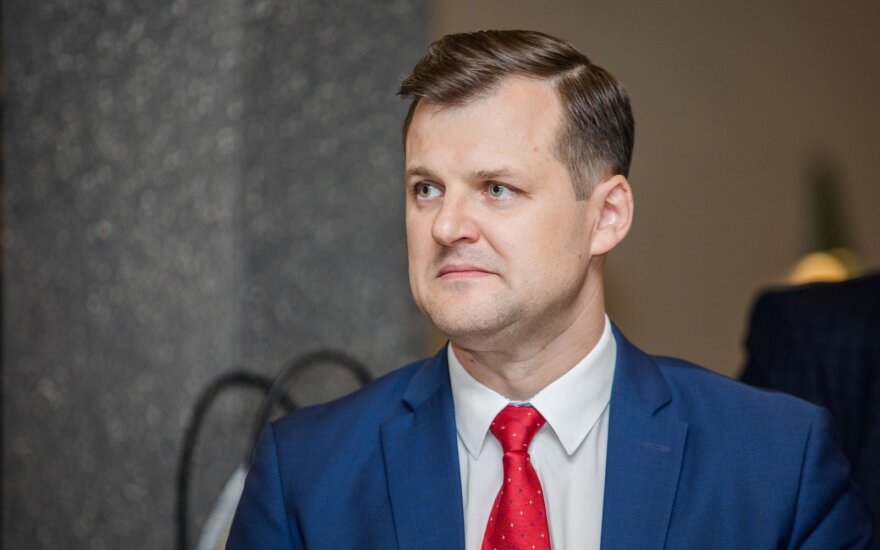 The Lithuanian Social Democrat Party (LSDP) while talking about renewal, is currently more than twofold behind the ratings leaders and the voters' trust in the leftists continues decreasing. However a new political power has appeared at the starting line.

This is revealed by an opinion survey commission by Delfi from the public opinion and market research company Spinter Tyrimai on 16-28 October.

This research points to miniscule changes that do not exceed 3.1% error margin regarding individual politicians and political parties, nevertheless it reveals tendencies that have been emerging over a number of months.

"The first thing that catches the eye is practically the first time that Naglis Puteikis' Lithuanian Centre Party (LCP) has exceeded the 5% margin and is now in a very similar position as the Order and Justice Party or the Liberal Movement. It could be coincidental, but it could mean they are gradually becoming a more competitive power," Vilnius University Institute of International Relations and Political Science lecturer, political scientist Mažvydas Jastramskis told Delfi.

This is in response to survey data showing that if the Seimas elections were held this coming Sunday, 5.4% of respondents would vote for the LCP, namely that the party would overcome the 5% vote barrier. In September the LCP would have been supported by 3.9% of respondents.

The LCP which is represented by solely N. Puteikis in Seimas has exceeded the parliamentary Order and Justice Party, which would remain below the barrier with 4.8% (down from 4.9% in September) support according to the research, as well as the Polish Electoral Action in Lithuania – Christian Families Union (LLRA-KŠS) which would be supported by 5% of respondents (up from 4.9%).

N. Puteikis' supporters are not far off from the Liberal Movement according to the data. The Liberals would receive 5.6% support (down from 5.7% in September).

"It is hard to say based on the party's ratings why the LCP is being supported, whether it is protest votes or if a new power is hoped for. But I have already said earlier that it may be a sign that the party system's erosion may be ongoing in Lithuania and the niche for newcomers is increasing. Whether these newcomers will be the LCP with N. Puteikis, which is currently gradually growing its wings or if it will be someone else is early to say, but the signs are there," M. Jastramskis said.

Social Democrats no longer viewed as an alternative

The survey shows that if the Seimas elections were to be held this coming Sunday, most voters would support the Homeland Union – Lithuanian Christian Democrats (TS-LKD). The late October data shows support of 19.1%, up 2.1% from September.

The ruling Lithuanian Farmers and Greens Union (LVŽS) is lagging behind only within the error margin, with October data showing 17% support (up from 16.6% in September).

Meanwhile the Social Democrats who are in third do not even reach 10% support. If the elections were to be held this coming weekend, the LSDP could expect 7.2% support. This is down from 9.1% in September.

According to M. Jastramskis, considering the current political period, it is clear that the Social Democrats are gradually beginning to fall.

"Everything added up for the Social Democrats: starting with the failed elections after which they entered the majority, thus being seen as a ruling party, then Gintautas Paluckas' election, internal tensions. And though support for them is decreasing gradually, but I cannot remember a time when the Social Democrats had only 7% of the vote. It is probably one of their worst ratings in a decade," the political scientist said.

He stressed that while the "Farmers" were met as a new party during the past Seimas elections, it appears now that people see them as one of the two chief alternatives along with the Conservatives – the ruling party and opposition party.

"The Social Democrats now fall out of this bipolar game. The question I have is what happens next for them. This party should definitely be concerned," M. Jastramskis stated.

Mykolas Romeris University lecturer, political scientist Rima Urbonaitė had similar thoughts. Comparing the newest data with that from early summer, she accented that support for the TS-LKD has been stably growing. "From June when the party's ratings were 15.6% it has risen to 19.1% in October. Of course when we consider the error margins, the growth is not very large, but the trend is clear," she pointed out.

The political scientist observed that the second place LVŽS' ratings have seemingly "frozen", not moving much at all since early summer.

"But meanwhile the Social Democrats are moving, increasingly into the red. If in June they could expect support from 12.8% of voters, now their ratings are down to 7.2%. In other words they fell 5.6% and even considering the error margin, that is a large amount," R. Urbonaitė explained.

She believes that the Social Democrats were unable to present the internal changes they have been speaking about to the public.

"We see fracturing, constant destruction in the party and I highly doubt whether people are receiving a message of renewal. Perhaps the party's lower ranks believe that it will happen with chairman G. Paluckas, but the question is whether the leader managed to broadcast such a message also for the broad audience, the voters," the political scientist spoke.

Leader exceeded by an MEP

Similar trends are revealed in a politician evaluation prepared by Spinter. When asked which politician or public figure would be most suited for the post of prime minister, most respondents supported current cabinet leader Saulius Skvernelis who is delegated by the LVŽS. In October his support reached 22.2%, which is 2% down from September.

LSDP chairman G. Paluckas cannot be found among the top ten candidates for the post of prime minister. A month ago he was ninth with 2.6% support.

M. Jastramskis believes that G. Paluckas falling out of the top ten means little because fluctuations of several percent points are insignificant.

"But that Social Democrat voters do not see G. Paluckas as a potential prime minister is not a good sign. As I mentioned, the voters see the TS-LKD and LVŽS as their two alternatives. We see representatives for the two parties in the ratings – S. Skvernelis and G. Landsbergis. It is not the leader who is seen as a potential PM for the Social Democrats, but V. Blinkevičiūtė. I am not saying this means that G. Paluckas has no prospects. But the fact is that the LSDP needs to do something strong in making the party noticeable and that the leader would be more visible and understood by society," the political scientist noted.

Meanwhile R. Urbonaitė highlights that TS-LKD leader is not nurturing his ratings as a potential PM either.

"Voters still struggle to see him as prime minister. But since this politician is visible, is the party's leader, he ends up in second place due to being active," R. Urbonaitė mused.

Back to reality regarding the cabinet

In terms of the current cabinet, led by S. Skvernelis, ratings, the research participants remained consistent.

"This is an unexceptional result. It is typical for Lithuania where people hold high expectations and the attitude toward institutions is accompanied by an inclination to mistrust. Of course if we consider whether such a cabinet could be re-elected - most likely it would happen in a situation where there are twofold more negative evaluations than positive," M. Jastramskis said.

"We should especially keep in mind that the coming of this cabinet was linked to massive expectations, but major politics turns out not to be the sort where things can be resolved overnight. Naturally the ratings have been declining from their lofty peaks. In principle it is back to reality," she stated.

The public opinion and market research company Spinter Tyrimai performed an opinion survey on October 16-23 on commission by the Delfi news portal. Citizens aged 18 to 75 participated. The survey was performed as a standardised interview. The research was performed across Lithuania at 65 different locations distributed as to represent the country's entire territory. The distribution of research participants is proportionate to the number of inhabitants in the country's regions. The error margin for the research is 3.1%.

The future of Lithuanian social democracy is cared for