Gintarė Bakūnaitė
Parašyti
autoriui
aA
Two leaders are emerging in the newest presidential ratings – Gitanas Nausėda remains first, while Ingrida Šimonytė continues to hold second, while also widening her lead against Saulius Skvernelis. According to political scientists, if we keep in mind the error margin for the research, it is still early to make conclusions, however if such trends continue, the PM may have to settle for third place in the elections. 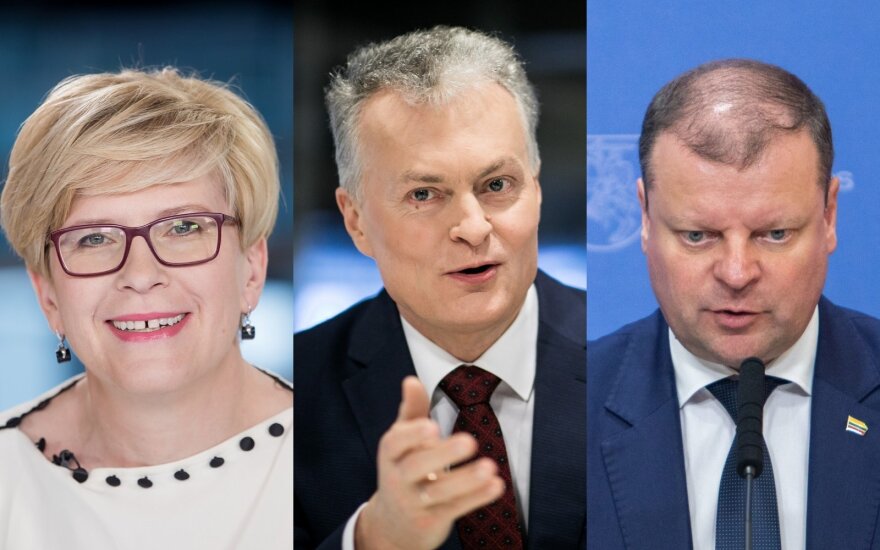 According to a survey commissioned by Delfi on February 18-28 by Delfi from the public opinion and market research company Spinter Tyrimai shows that if the presidential elections were held this coming Sunday, G. Nausėda would take 28.2% of the vote, I. Šimonytė – 22.1%, while S. Skvernelis – 15.3%.

Delfi reminds that Spinter Tyrimai has changed its survey method and 40% of respondents are interviewed online.

Prime Minister's office as an obstruction

With S. Skvernelis declaring his presidential bid in January, the opposition expressed worry that it will no longer be clear if the PM is speaking as a presidential candidate or as the head of cabinet. Furthermore, apparently, he could employ his office for the purposes of the presidential campaign.

However, according to Vytautas Magnus University political scientist, professor Lauras Bielinis, so far S. Skvernelis has been more hampered by the prime minister's office than aided.

"It is clear that Skvernelis is greatly restricted by administrative commitments and in his case, every step is carefully monitored and criticised, thus it is difficult," L. Bielinis says.

He is echoed by Mykolas Romeris University political scientist Rima Urbonaitė. According to her, the mistakes made in the prime minister's work are also reflected in his ratings.

"So far what we see is that the trend is for Šimonytė to grow somewhat and the gap has now increased. We will have to see if this trend continues. It appears that after all Saulius Skvernelis having a significant so-called negative rating leads to this result. To change a neutral rating to a positive is easier than from a negative to a positive. It appears that his earlier sufficiently negative ratings due to some scandals linked to his work as prime minister are setting a certain tone.

Voters evaluate him not only as president, but also as prime minister because they are looking at what tasks he has performed and what tasks he hasn't. This once more shows that running for such an office from a governing position, from the office of prime minister is no easy task because voters will be rather critical," the political scientist stated.

"It was definitely a difficult time for Saulius Skvernelis when we saw rather major scandals – the sit in at the Ministry of Education and Science as well as questions arising regarding the children's rights protection system and those questions also arise in the cabinet. I would think that because Saulius Skvernelis does have that difficult job as prime minister, it is not always easy for him to gather than political popularity," she commented.

Instruments of power can be beneficial, but are risky

According to R. Urbonaitė, if the prime minister managed to make use of the instruments of power in his hands, it could be beneficial for him, however, so far the political scientist believes that due to restrictions on Skvernelis, currently more favourable cards are landing in I. Šimonytė's hands.

"If the instruments of power are used suitably, it could be that he would gather up ratings instead. If it were used or attempted to be used. We will see what will happen, but so far it appears that the freedom and ability to perform a more intensive election campaign is to Šimonytė's benefit so far," R. Urbonaitė stated.

Meanwhile, L. Bielinis is more sceptical in this regard. According to him, if S. Skvernelis tried to make use of his prime minister position for the elections, it could even worsen his situation further.

"He could perhaps make use of it and he will, but it is very dangerous because he will immediately be accused of misusing administrative resources and this will become the basis of his negative image, which is very bad and does not suit an electoral campaign. And it is bad for him as a candidate," the political scientist thinks.

According to L. Bielinis, the gradually widening gap between "Farmer" candidate S. Skvernelis and Conservative-backed I. Šimonytė is so far not a threatening trend to the prime minister, however he and his team need to do some thinking.

"That the ratings are not rising, but declining is an indication that mistakes were made. Most likely part is personal mistakes, while part is, as I said, him being restricted by administrative commitments and he is being criticised over it.

On the other hand, we must understand that the public views candidates to president as tropes and in this case, Skvernelis did not demonstrate himself within the presidential trope in the last month. This seems to be one of the main factors, but we will see how it will develop. For now, I would not say that the trends are dangerous to him. Simply it is a decline right now and if Skvernelis and his team evaluate it critically, the winds could shift," L. Bielinis predicted.

Commenting on the newest ratings, the head of Spinter Tyrimai Ignas Zokas noted that while the gap between second and third place has risen, it is unlikely that I. Šimonytė drew the prime minister's voters to her side.

"There is a slight jump from Šimonytė, but once again we see that in different surveys, the percentages shift around. On the other hand – Skvernelis and Šimonytė are not competing, however odd that may sound. The percentage difference between them perhaps shows how rallied their sympathisers are or greater support because really, their electorates practically do not overlap. Šimonytė is definitely not drawing votes from Skvernelis. If she is attracting voter sympathies, who decide to vote for Šimonytė, it is usually not Skvernelis' voter, people rarely pick between these two candidates. She looks stronger today, however it once again does not fundamentally weaken the PM's positions," I. Zokas stated.

Political scientist R. Urbonaitė also believes that it is early for I. Šimonytė to celebrate: "I would view the 3% growth warily because it is also linked to the error margin. We will see if this growth is sustained. I would for now make very careful conclusions, but on the other hand, let us note that in recent times, it was namely February where Šimonytė herself began travelling around more, became more active, we did not see any particularly negative news, thus we can think that the intensifying campaigning gave results. However, I would be careful with this because this growth could be a momentary mood among voters."

Meanwhile, VDU professor L. Bielinis believes that the strengthening of I. Šimonytė's positions could also have been due to the activity of the Homeland Union – Lithuanian Christian Democrats, who are backing her.

"Šimonytė's significant rise can be linked to the activity of the political power backing her. Here we clearly see the political party, the Conservatives, acting very intensively and now it is their main task to ensure that Šimonytė is not viewed as some party's candidate, but as one of a wide majority. They are trying to realise this to the greatest extent they can and it is working so far," the political scientist said.

A little later, the top three changed in a Spinter Tyrimai survey, where G. Nausėda remained in the lead, with I. Šimonytė second and S. Skvernelis third. That said, survey results in January showed that the Conservatives' and "Farmer" candidates were practically sharing the same position.

According to L. Bielinis, the now emerging differences in voter support for I. Šimonytė and S. Skvernelis can already be viewed as a forming trend.

"This gap shows a forming trend where from three leaders, one becoming separated with his belatedness and inability to catch up and we, if this continues, will see only two realistic presidential candidates at the finish straight, while Skvernelis will be in the honourable third place, but not high up," the VDU professor shared ill portents for the PM.

"Let us keep in mind that Skvernelis himself has not yet truly started his campaign, his visits to voters have only just begun, thus we once more see the problem of this campaign not having existed yet – we currently know neither Skvernelis' programme, nor the final composition of his team. I would say that he has only put one foot into the electoral campaign. I believe that this could also have certain results though of course, he does not leave the public sphere even while he cannot dedicate full attention to these elections as a candidate. If this is not suitably resolved, it will have negative repercussions," she stated.

Other candidates would not even receive their deposit

The other presidential candidates are currently left in the dust by the competing trio. Arvydas Juozaitis in fourth place would only receive 4.8% of the vote.

"Several new candidates emerged, who registered for campaigning, but they were not revolutionary. We can say that in essence the top three remains as is – Nausėda, Šimonytė and Skvernelis.

We have new candidates – Gražulis, Puidokas, who were not on the list before. Once again, the percentage is not high. Tomaševski's percentage will likely be larger because he gains the votes of all the Polish inhabited areas, which may not always be equally represented in the surveys," I. Zokas commented.

It is interesting that if the elections were to be held this coming Sunday and the results would be as currently stands, the candidates beneath the top three would not even regain the nearly 5000 euro deposit they had to pay.

According to the Republic of Lithuania Presidential Election Law, the deposit is only returned when one obtains 7% or more of the vote.

The public opinion and market research company Spinter Tyrimai performed a survey on February 18-28, 2019 on commission from the Delfi news portal. Residents aged 18 to 75 participated. The survey was performed as a standardised interview.

The combined research method was 60% face to face interviews and 40% online. During the direct interview, the survey was performed by professional survey takers. They lead conversations with respondents based on pre-made questions, noting answers on a table. The internet survey provided respondents with a link to an online survey the respondent could fill in independently at a convenient time. The link was unique, allowing only one submission.