LT Daily, media brief
aA
Next year’s budget is turning into a task for the new cabinet, which has yet to form and the new Seimas, which started work this week. The President has already presented the candidacy of Saulius Skvernelis for the post of PM, next week he will likely become the head of cabinet with little to no resistance and will announce his ministers. The new Seimas Speaker Viktoras Pranckietis discussed the coming term on the Savaitė show on LRT TV. 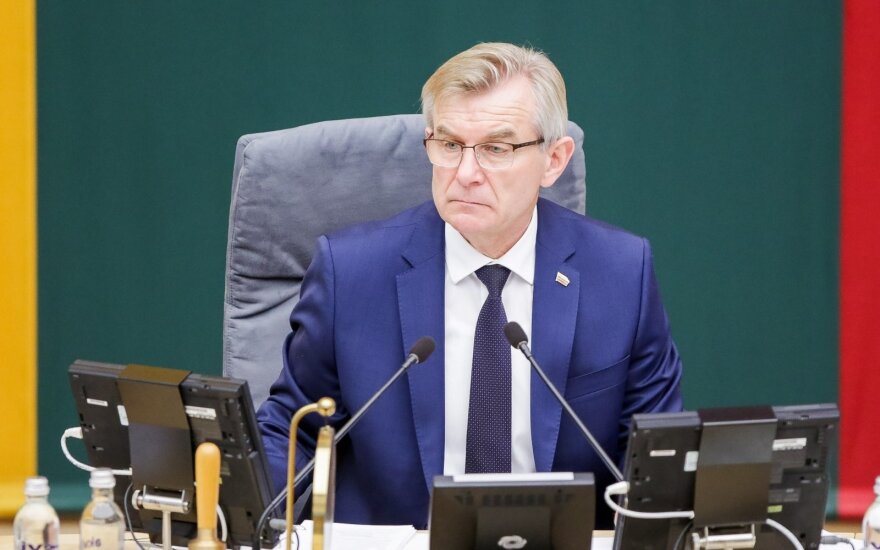 - Next year’s budget will be a key task for the new Seimas. Have you looked through the budget?

I would say I have not looked in depth, but its issues are already familiar to me. State control submitted remarks. They are crucial, we should review.

- The deficit is too large, what do you plan to do? Were there talks about it?

To discuss everything within four days when structures are being formed and plans made… We have yet to perform a detailed review of the budget, but that is what the cabinet is being formed for. The PM will have to take over in this regard. Yes, we will still have to discuss it.

- Do you know why the deficit rose so much? What is the main reason?

You caught me, I can’t answer that straightforwardly.

- Then the social model. What fate awaits it? It will depend on Seimas.

We are discussing a temporary halt to the social model. We are speaking about postponing it for up to half a year. Postponing because it is not justified by the budget yet.

- Will the social model be postponed by half a year or the implementation of the Labour Code?

- And the social model itself?

Well, that will relatively shift further back as well.

- But how much specifically?

We have to deliberate. We cannot form all future policy over four days.

- Your party chairman has said that priority goes to professionals. How is it that the Seimas Speaker is an agronomist, while the PM will be a policeman, while the Culture Committee will also be headed by an agronomist and farmer and the Healthcare Committee by a theology professor? Perhaps we misunderstood that professionalism somehow?

Most likely you misunderstood. I believe that there is a time to enter politics. Time should be set aside to appear in it as well. Perhaps we shouldn’t start talks of “well, what are you then” right away.
- That’s not what I mean. I am not against you personally taking the position, but I just want to say that if someone declares that only professionals can work in specific subject areas, then it simply “does not connect”. Perhaps it was rushed to talk about those professionals?

I think that after all the cabinet, Mr Skvernelis will choose individuals who will fulfil your requirements. The composition of committees is somewhat different. I have already mentioned that Danes invite professionals of other spheres into committees, so that they could have a sort of “alien” perception of what is happening in the area.

- Fine, but for some reason the Culture Committee chairman is a farmer, but his advisor is a former Minister of Culture, former ambassador to UNESCO. Is this logical to you?

Logical. It is excellent he was the ambassador to UNESCO [that he is the deputy]. I was definitely in favour of him being there.

In regards to a farmer chairman, I would suggest to avoid that sort of wording because he has long not been at that farm or farms. If you look at all of his work and projects, you would most likely not venture to say that it was non-cultural activities. These are projects that are also broadcast on this [LRT] television channel and others.

- You see the Naisiai scenario as cultural activity?

And you do not?

- Well, when I see a former ambassador to UNESCO alongside, then I think that the cultural work he has done is more cultured.

That is your opinion, but if it has been done for so many years… I am not a culture specialist myself, I only know that this sort of work took up far more space in his life than farming.

- So you think it was cultural work?

I don’t think so, that’s what it actually is.

- Are you confident that it will be you that will set the tone of and will govern Seimas, not the party chairman, who appears to be an influential and notable individual, who presents his opinion everywhere?

You know I am a person of the older generation. No-one ever dictated a tone for me, I always worked independently and earned my reputation myself. I need to assistance in earning a reputation and ensuring my independence. I suggest we “close” this question.

- Ok, lets. Then let me ask, where are you headed on your first visit?

If I were to choose myself, it would be the closest state in the South.

- You would first want to visit Poland?

Yes, but this is my personal wish. I have to be told, there is a protocol to follow and we’ll figure it out.

- Very well, another question. A publication from your party entered my hands. It was a newspaper. Among the information presented on candidates we find their zodiac signs. What do you think, how much do horoscopes determine a political career?

Perhaps you would agree that in elections a lot more is permitted, more is tolerated and more is needed. There are people who decide based on star signs. Perhaps some will view it favourably. I would rather not mull on it, I would personally definitely not want to use star signs.

- It wasn’t star signs that helped you become Seimas Speaker when you were rated down from 6th to 9th? That isn’t the will of the horoscope.

No, it isn’t. But you touched upon a question very well. I think that our system is very democratic, but not perfect. We do not elect the most competent because we race with commercials. Not minds and not competence are running, but self-presentation.

I would even say that an amendment or requirement could be put in place where in single mandate districts candidates must have a public debate, that they would appear and demonstrate themselves. Nowadays even to television you go only if you want to. That was very odd to me. This is not only disrespect to the voters, but also an unwillingness to demonstrate yourself. I believe that we should elect looking more into people and not their advertisements, among which is horoscopes.

- In other words to elect based on ideas and not ties?

On the new Seimas Speaker

Viktoras Pranckietis of the Lithuanian Peasant and Green Union was elected as Lithuania's new...

Who is going to the next Seimas Speaker?