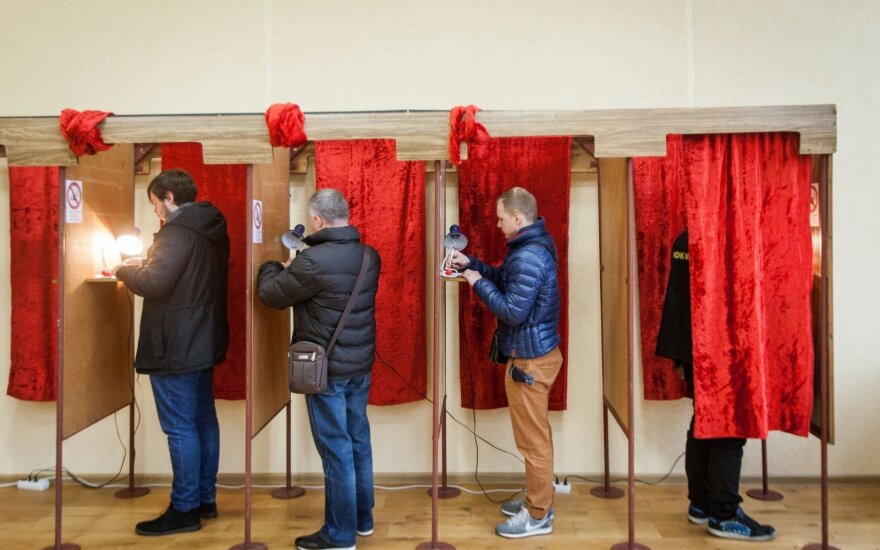 Bad news for the Liberals

If elections were to happen next Sunday, the Lithuanian Peasant and Greens Union (LPGU) would triumph in it following its continued rise in popularity. Political scientist Virgis Valentinavičius warns that the continuing honeymoon could mean the entrenchment of populist politics.

The LPGU’s ratings grew by 3.9% during the month and are currently at 30.7%. This is corroborated by data from a Vilmorus survey performed on the 2-10th of December, according to which the Peasant Greens would receive support from 31.5% of voters.

Related articles
The greatest issue for R. Karbauskis and the “Peasants”
Karbauskis re-elected chairman of Lithuanian Peasant and Green Union

The Social Democrats, the second party in the coalition government, is continuing to wallow in scandals and would receive 8.9% of the vote.

The Liberal Movement is faced with unfortunate news – their popularity decreased from 9.2% to 5.7% over the month. This is likely related to the continued public attention to Eligijus Masiulis’ corruption scandal. Gintaras Steponavičius and Šarūnas Gustainis announced their withdrawal from the Liberal Movement in December, when it was revealed that they were questioned as special witnesses in the political corruption investigation.

The remaining parties would fail to exceed the 5% barrier in the multi-mandate district and would fail to enter Seimas. Among them we find Order and Justice, Polish Electoral Action in Lithuania – Christian Families Union and the Anti-Corruption Coalition of N. Puteikis and K. Krivickas. Other parties and political movements have ratings below the 2% margin.

Respondents were also asked which politician or public figure was most suited for the post of Prime Minister. 28.6% found the current PM Saulius Skvernelis as the most suitable.

In second place we find Conservative leader Gabrielius Landsbergis, whose popularity dropped 2.1% during the month, albeit remaining in the error margin. In third we find LPGU leader Ramūnas Karbauskis, who is seen as most suitable by 5.2% of respondents.

“The “Peasant” honeymoon continues. It is becoming rather concerning – if the trend of high and in fact growing popularity continues, it could mean an entrenchment of populist politics,” Mykolas Romeris University Politics and Management faculty dean V. Valentinavičius commented.

The expert says that the “Peasants” gathered the votes of those most receptive to populism. These are votes from the Labour Party, Order and Justice and Anti-Corruption Coalition of N. Puteikis and K. Krivickas electorates, as well as the votes of disappointed Social Democrat voters.

“Considering that there has yet to be any real activity on part of the government, while the “Peasants” have occupied themselves with various populist jingles such as national costumes or the futile and dangerous question of the number of members of Seimas – they are in essence aiming for the moods of the Lukashenko Belarus – that the parliament is useless and should rather be cut down to size. The next step would be to abolish the parliament totally or just keep one member,” the political scientist quipped.

He explains that if such means are used to maintain popularity, it raises concerns that this could begin to break down the political system of the country.

Valentinavičius also discusses the decrease in Liberal Movement popularity. He explains that the rise in popularity a month ago (ratings reaching 9.2% in November) reflected the Liberal Movement’s results in the second round of Seimas elections. According to the expert the Liberals had a strong showing in the second round due to successful performances by certain strong candidates in the first round. “Now they are returning to the popularity levels of the first round of elections,” says Valentinavičius.

He also reminds that in December liberals G. Steponavičius and Š. Gustainis were asked to testify at the prosecutor’s office. Valentinavičius notes that the testimonies of the aforementioned show that the problems present may not have been just those of E. Masiulis – it could potentially be a party-wide problem.

G. Landsbergis compared to A. Butkevičius

“The Homeland Union and G. Landsbergis should be concerned after all. You could say that the drop of popularity is within the margin of error, but when the drop in popularity is equal to that of A. Butkevičius, it could mean that the first round flashmob born from social media, which vanished in the second round, is starting to dissipate,” Valentinavičius commented on G. Landsbergis’ personal ratings. The expert explains that the young leader’s popularity is decreasing the same way as Butkevičius‘ and it raises a question of whether this will be a long term trend or not.

According to survey data from Vilmorus’ 2-10 December survey, summing up favourable and negative opinions, G. Landsbergis and A. Butkevičius have entered the top three most negatively viewed politicians.

V. Valentinavičius guesses that the decrease in Landsbergis’ personal popularity is due to immediate post-election denial – denial that results were poor, using mathematical modelling to attempt to show that the results were unprecedentedly good in party history, despite winning 2 mandates less than in the previous elections.

“This past month G. Landsbergis has overall vanished from the public sphere. When he announced the chairman elections, he was still visible, but currently, during these elections, Landsbergis is not appearing, it will be interesting to see what this will bring,” mused Valentinavičius, a member of the TS-LKD, albeit not holding any position in the party.

In his opinion the main problem of G. Landsbergis between the two rounds of elections was that people failed to see him as a Prime Minister. “In my opinion the party has a significantly better candidate – Ingrida Šimonytė. It is a major question whether it was justified to name G. Landsbergis the official PM candidate and, in principle, hide I. Šimonytė. It is the same as hiding a lump of gold from voters,” the MRU faculty dean said.

“While currently Algirdas Sysas and the other Social Democrats try to oppose the “Peasant” line in certain questions, until the SocDems elect a new leader, I believe their ratings will continue to decrease and things will only get worse. The party needs a new start, especially since scandals continue to haunt them,” V. Valentinavičius summarised the LSDP circumstances.

He reminds of news media article on Social Democrat vice ministers of dubious quality, the continuing story regarding Lietuvos Geležinkeliai, that knowleadgeable analysts immediately relate to the Social Democrats. The shadow of scandal continues to drag behind the party, with the Vijūnėlė manor story being recently recalled due to a court ruling to demolish the building.

“The party desperately needs a new leader who could put a full stop on these matters and convince voters that the party is truly changing and will seriously resolve problems of its attitude to political influence,” spoke Valentinavičius.

The survey by public opinion and market research company Spinter Tyrimai was commissioned by news portal Delfi and performed on December 12-20, 2016. Citizens aged 18 to 75 were interviewed. The survey was performed as a standardised interview.

The research was done across Lithuania at 65 selection points distributed to best represent the entirety of the country. 1007 respondents were interviewed. The distribution of participants is proportional to the number of inhabitants of the country’s regions. The research error margin is 3.1%.

The greatest issue for R. Karbauskis and the “Peasants”

The Peasant and Greens Union along with its large batch of non-partisan candidates won the Seimas...

Ramūnas Karbauskis was re-elected as chairman of the Lithuanian Peasant and Green Union (LPGU) at...

Support for Peasants and Greens continues to rise

The Lithuanian Peasant and Green Union (LPGU), the party that triumphed in last October's...

What prevents opposition to R. Karbauskis in Seimas?

The sort of cooperation found between the Liberal Movement (LS) and Homeland Union – Lithuanian...

Lithuania's Prime Minister Saulius Skvernelis is the country's most popular politician after his...