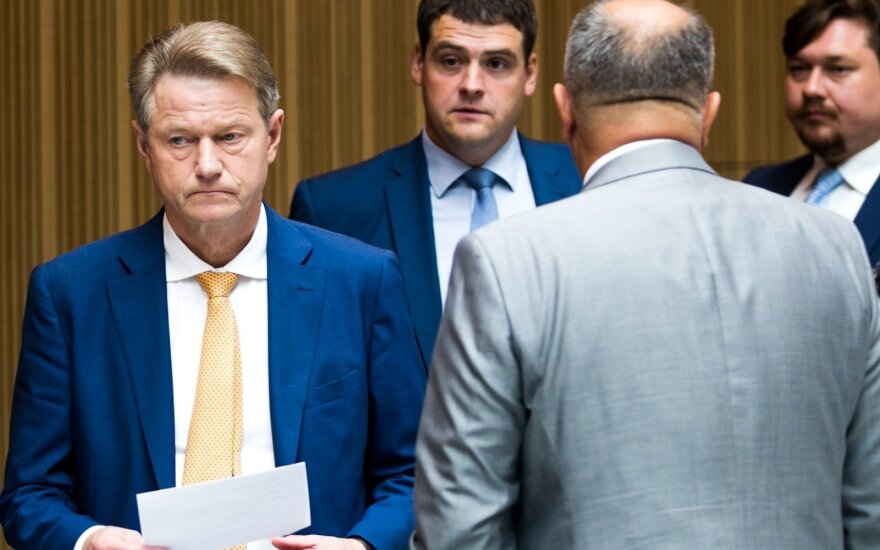 The Seimas elections knocked out all three political powers previously in the majority – the Labour Party, Order and Justice and the Lithuanian Social Democrat Party (LSDP). The Homeland Union – Lithuanian Social Democrats (TS-LKD) did not fulfil expectations either, having lost resoundingly to the Lithuanian Peasant and Greens Union (LPGU) in the second round. In response to the fundamental political changes that happened, Labour and Order and Justice have already changed their leaders, while the Social Democrats promise leadership elections next year and the Conservative leader has spoken about the possibility of resigning. Will new leaders save the major Lithuanian parties who have now been overshadowed by the “Peasants”?

The greatest fiasco of 2016 was that of the Labour Party, whose popularity dropped from 20% in the multi-mandate district in the 2012 elections to 4.7% this year, failing to exceed the 5% vote barrier needed to enter Seimas. With Victor Uspaskich having withdrawn from Labour’s management, the party was saved by neither Loreta Graužinienė‘s position as Seimas Speaker, nor the leadership of publically active Valentinas Mazuronis. The party’s chosen strategy of “preventing the flood of refugees” was also met with failure because this year there was neither a flood of refugees in Europe, nor Lithuania.

Three things could save the Labour Party now – a uniting leadership, being in power or a new idea, however for now it appears that next year Labour will have none of these things. At the end of the year, Labour elected Mayor of Širvintos Živilė Pinskuvienė as its new chairwoman, but she is haunted by comical stories of autocratic experiments in Širvintos; after she was elected a number of politicians announced their intent to withdraw from the party. Among them we find Vytautas Gapšys, Valentinas Mazuronis, Dangutė Mikutienė. For now it appears that Pinskuvienė causes more controversy than unites the party for the tasks at hand.

That its representatives no longer believe in the Labour Party is displayed by the choice of the two members of the party who were elected into Seimas through single mandate districts – Valentinas Bukauskas and Petras Čimbaras to join the Social Democrat fraction, which is in the majority. It is likely that next year similar decisions to join other high profile political powers (the Social Democrats or the “Peasants”) may be taken by other lower level Labour Party members, who will start to consider their political future in more prospective entities. If this happens, Labour may be faced with the fate of Artūras Zuokas’ political movement.

Such a loss of membership could be stopped by a new conceptual platform in the party, however new ideas were not brought up in the chairman elections and the ideas of economic left and social conservatism which appeal to Labour voters have currently been usurped by Ramūnas Karbauskis’ “Peasants”.

This coming year the Labour Party will have neither a fraction in Seimas, nor representatives in the ministries, while the new management has demonstrated neither a unifying leadership, nor is discussing any new ideas. Currently it appears that the only thing that could bring Labour back into the vanguard of the country’s political scene would be the failures and corruption scandals of other political powers, primarily the Peasant Greens.

Order and Justice to try and be a normal party, but it could be too late

The Order and Justice performance in this election cannot, in principle, be described as bad – the number of mandates attained is very similar to that obtained previously, with such a result having been reached in the background of corruption scandals, where law enforcement has cast suspicion upon the party and some of its representatives for graft. Regardless, the party’s actions, based on Rolandas Paksas’ decade-long attempt to return to Seimas or the Presidential Palace does not appear prospective, thus similarly to Labour, at the end of the year Order and Justice decided to renew itself and instead of R. Paksas who was party leader so far, chose Remigijus Žemaitaitis as its chairman. Its and its leader’s prospects look better than Labour’s.

The new party chairman R. Žemaitaitis does not match former leader R. Paksas in political weight and fame, but at least looking from the outside he does not appear as divisive as Ž. Pinskuvienė. Furthermore, unlike the Labour Party, Order and Justice representatives have seats in Seimas, which inherently present prospects and prevent rank and file members from scattering.
Furthermore it appears that in terms of ideas, R. Žemaitaitis may have something to say. Speaking at party congress on December 10th, he stated that Order and Justice is the only party capable of claiming the identity of a “national party”. At times A. Paksas unsuccessfully attempted to develop a similar political line, but at least so far the Eurosceptic niche in Lithuania remains unoccupied, though it could become increasingly relevant in the future. Thus in this respect everything depends on R. Žemaitaitis‘ communication and management skills in expressing the new party political programme.

Nevertheless if Order and Justice wants to strengthen its positions by č0č0, the party will need to grow out of the regional level and find at least a few faces broadly known in society, as well as more clearly crystallising their main political message, which was previously associated with R. Paksas’ personal vendetta. Without it Order and Justice may be forgotten by its old voters and next year it will start becoming clear if the party will manage to find new ones.

Social Democrats not intent to make friends with social democracy

The Social Democrats and party leader Algirdas Butkevičius spent almost the entirety of the last four years in first place in opinion polls, but the outcome of the parliamentary elections showed that this popularity was only illusionary, with Butkevičius’s loss to a “Peasant” candidate in his home district of Vilkaviškis becoming symbolic of it.

After it, the party leader announced his intention to resign in spring 2017, but it soon surfaced that despite such a move, he does not intend to abandon management of the party. Butkevičius‘ decision to almost unilaterally negotiate with the Peasant and Greens Union regarding the coalition government and swapping the Ministry of Social Security and Labour to the Ministry of Economy received much criticism.

After these steps, the party chairman was met with criticism from other Social Democrats for his low attention to social sensitivity, which apparently should be accented by a political power named the Social Democrats. Party identity was also challenged by the new Labour Code accepted in the lead up to the Seimas elections, which should have liberalised labour relations and was heavily supported by Butkevičius.

For now it appears that former Mayor of Jonava Mindaugas Sinkevičius who has been appointed Minister of Economy may become the new party leader in spring, thus he will be faced with the responsibility to rein in the influential and nomenclatural action inclined party groups and finally solve the Social Democrats’ identity problems. While M. Sinkevičius’ young face could be an advantage in elections, for now he cannot compete in popularity with Conservative activists in social media, while his on view of social democracy is not clear.

If they seek to once more become the most important Lithuanian party, the Social Democrats will not suffice to elect a young politician to be its leader. Political content he manages to offer will be far more important.

Conservatives: what beyond the urban?

TS-LKD party leader Gabrielius Landsbergis has also spoken about the possibility of leaving the post of party leader during next year’s party congress, with his party having unexpectedly been rolled over by the LPGU in the second round.

The position of the Conservative leader currently looks better than those from parties which were in the majority last term. G. Landsbergis, while not liked by a significant portion of society also has many sympathisers and furthermore is actively engaged in social networks and is trying to draw the attention of youths.

That said the Conservative Christian Democrat wing has publically expressed dissatisfaction that the Conservatives did not hurry to form a coalition with the “Peasants”, however it appears that Landsbergis will face little trouble in the spring election because the liberal-conservative wing of the TS-LKD has no other leader right now and the Christian Democrats are incapable of taking party control on their own.

Finally G. Landsbergis is one of the most active of the four political forces in forming political ideas. Their flaw is related to the excessive attention paid to economic factors. The public party leadership rhetoric has failed for a decade now to wade out of the Andrius Kubilius era heritage of focusing on modern means of economic growth such as foreign investment and expanding innovation. These are relevant to youth in the large cities, but they are unlikely to add new voters in the province. The ability to respond to this criticism will be Landsbergis’ greatest challenge from internal party competitors next year.

Peasant & Greens up on popularity scale, SocDdems down

Lithuania's ruling Peasant and Greens Union, which triumphed in the recent parliamentary elections,...

Živilė Pinskuvienė , the mayor of the Širvintos district, was elected as the new leader of the...