LT Daily, media brief
aA
The victors of this year’s election to Seimas, the Lithuanian Peasant and Greens Union (LVŽS) is beginning negotiations with the Lithuanian Social Democrat Party (LSDP) on building a new cabinet. While there is no coalition agreement yet, it is already becoming clearer who will take what officers in Seimas and the ministerial cabinet. 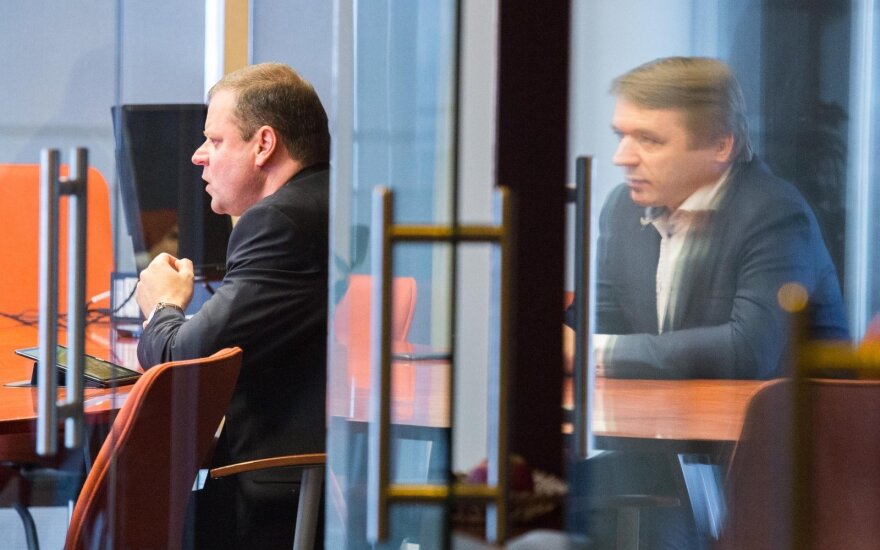 Butkevičius – we feel responsibility, we do not want a crisis

After a long presidium discussion the Social Democrats decided to negotiate with the “Peasants” after all. Such a conclusion was among various predictions, however both politicians and analysts have varied views of the LSDP’s choice to enter the majority once more. Party Chairman Algirdas Butkevičius bases the decision on a feeling of responsibility.

“The Social Democrats are first of all acting responsibly, they do not want to cause a political crisis; the “Peasant” programme has similar proposals to the Social Democrat, I think that our electorates are similar and we are committed to help the “Peasants” accomplish common strategic goals, if they wish to do so. First of all we feel responsibility, with most of Lithuania’s citizens choosing the “Peasants” we respect their decision and hope that together we can accomplish both their goals and our wishes in the near future,” said the LSDP chairman, incumbent Prime Minister Butkevičius.

Nevertheless LSDP deputy Chairman Algirdas Sysas cautions that this decision does not guarantee a coalition. “We are not yet signing a coalition deal after all, we are beginning further discussions, further, very specifically on what we could include into the programme. The topics we have no disputes in we can write in immediately, but for those that have a certain period of implementation because there are many varied proposals, in terms of how much time it will take, how to arrange it, there are things to talk about,” stated A. Sysas.

Not seeking the seat of PM

The Social Democrats have not revealed what ministries they would like to be in charge of or what their ministerial candidates will be. They do however state that they will concede the seat of PM.
“This is a negotiation and I think that the PM seat is already clearly slated for the “Peasants,” while the Seimas Speaker post, from what I recently heard, may be left available for partners, but the “Peasants” will demand the Speaker post, so I think there won’t be much resistance because the number of Seimas mandates between us, the difference is massive,” said the Social Democrat leader Butkevičius.

On the eve of the presidium meeting an influential member of the Social Democrat management and member of the presidium, who did not wish to be identified told Alfa.lt that the party Chairman Butkevičius is “holding the party hostage, is blackmailing the Peasant Greens, demanding the seat of Seimas Speaker in exchange for joining the coalition, trying to avoid having to resign as party chairman.”

The LVŽS Chairman Ramūnas Karbauskis says that the negotiations should successfully conclude within the week. Political scientists have mixed receptions of the Social Democrat decision – their positions are similar to that of the party internally. A number believe that remaining in the opposition would be lethal to the party, others disagree and believe that being in the opposition could help the party reform and renew itself.

“The Social Democrats are palying hard to get, but I think that they will definitely enter because if they do not enter the coalition, they will be left in a political desert, while entering the coalition will provide them with disproportionately many ministries as well as Seimas committee chairmanships. Since they are needed, they can demand for more,” noted political scientist Kęstutis Girnius.

Who will dominate in the left?

However political scientist Linas Kojala says that the Social Democrats will risk losing the political left to the “Peasants” if they enter the coalition.

“If we think that the coalition will last all four years, that further fractures won’t occur, shows that the Social Democrats will be the junior partner and this is not a beneficial trend for one of the large parties, particularly knowing that the “Peasants,” who will be clearly dominant, are those who took many Social Democrat votes and this can help them establish themselves as one of the main centre left political powers,” explained L. Kojala.

Why are the Conservatives not negotiating?

While the LVŽS and the LSDP are negotiating, the TS-LKD will stay aside. After a crushing blow in the second round, the Homeland Union – Lithuanian Christian Democrats (TS-LKD) took up an obstinate position in regard to negotiations and entered consultations with the “Peasants” with clear advance conditions, threatening to not negotiate if they are not fulfilled.

“You see those parallel negotiations, they can obviously benefit the “Peasants” because they can use it as a means to pressure the Social Democrats and obtain more concessions from them. We definitely do not wish to be a negotiation tool. This is normal negotiation practice, we would not be angry, nor should the “Peasants” be angry, if they start with one group, then negotiations with the other will not occur until the first negotiation is over,” said TS-LKD Politics Committee Chairman Andrius Kubilius.

The LVŽS leader R. Karbauskis was not surprised by the Conservative turnabout, with the TS-LKD first talking of a coalition with the “Peasants”, but then cooling off after the election. He explains it through pragmatism as well as the results which stunned both the Conservative party and their electorate after the second round.

“Pragmatic calculation – they first thought they would win the election and then would need to seek partners to form a coalition. Afterwards they started to see that they may not win the election, thus started to criticise between the first and second round and after the election made it clear that they would be better off to remain in the opposition and seek that the new majority government would fail to complete its four year term. We will attempt to do so that they would have nothing to be happy about, that’s all,” said the LVŽS leader Karbauskis.

However some TS-LKD party members wish for negotiations with the “Peasants.” They are demanding the party leader to call a party presidium, apparently it is not the leadership, but the entire party that should decide whether to negotiate.

“It has been a week since the election and we have yet to grasp the contours of the future cabinet, whether it will be leftist or rightist, whether we will return to a broad coalition or so. Enough time has passed. I want to say that the party’s official institutions, neither the presidium, nor the council have discussed or made any decisions regarding how to manage this situation,” said TS-LKD presidium member Paulius Saudargas.

Meanwhile R. Karbauskis hopes for support from a number of Conservative fraction members. He even hints at a potential split in the Conservative party, perhaps with a number of party members joining the “Peasants.”

“I believe that we can come to terms even if we are in different fractions, no matter whether we are in the majority or minority, but we are always open to cooperation or integration, if any of the Conservative party members, who are in an unenviable situation due to a difference of opinion split off sooner or later, be it in half a year or a few months, or later,” said the LVŽS chairman.

Such talks test the temper of one of the TS-LKD leaders A. Kubilius. “These are rather improper statements and actions. Well I understand that those who come from municipal councils may have such initiatives, this practice is known and documented, but when it is done by a party chairman and he says “we will split another party,” then it appears a little flimsy,” retorted Kubilius.

“Such talks have often hovered around Lithuania – the Christian Democrat wing, it could run off, it could split off. We are one party, the TS-LKD, for eight years now. We have experienced booms and busts, various periods – both fire and water, particularly during the 2008-2012 term that is one thing. Another thing – no posts or money from R. Karbauskis will bring any Christian Democrat anywhere, that’s a fact,” said TS-LKD presidium member P. Saudargas.

Political scientist – the Conservatives would benefit from entering the coalition

Vilnius University Institute of International Relations and Political Science (VU TSPMI) docent K. Girnius believes that the Conservatives would benefit from a coalition with the “Peasants.”
“I believe that if they were smart, the Conservatives would enter the coalition because by participating in it they could make decisions and prevent projects which they feel are harmful, eventually attracting some of the “Peasants” to themselves,” said political scientist Girnius.

Who will get what?

The “Peasant” and Social Democrat negotiations should begin on Monday. Unofficial data suggests the Social Democrats are aiming for four ministries – Social Security and Labour could be led by Rasa Budbergytė, Justice could be led by Julius Sabatauskas, Foreign Affairs could remain in Linas Linkevičius’, who has the support of the President, hands, while the Ministry of Economy could go to LSDP deputy Chairman and Jonava region Mayor Mindaugas Sinkevičius. The current party leader A. Butkevičius could be satisfied with the seat of Seimas deputy Speaker.

The most realistic candidates for Seimas Speaker, based on unofficial sources are future member of the “Peasant” fraction Rima Baškienė, Povilas Urbšys or Viktoras Pranckietis.

It’s not just the images of belligerents that explain the landslide victory of the Lithuanian...