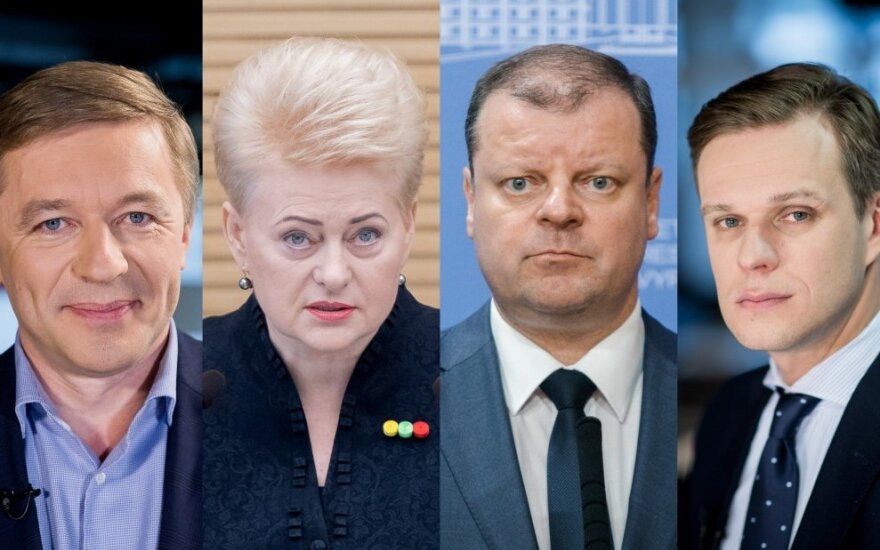 For four years in a row now, Delfi announces its unique project Most Influential in Lithuania 2018. Surveys in seven different areas will show, who has the greatest influence in the country, whose opinion and decisions change public life the most. This list is unique in that it will unveil both expert and public evaluations. The final list of the most influential will be released on August 29.

In its first list, Delfi invites to review the political world – which politicians are the most influential in Lithuania. This year the surveys brought about numerous surprises – some politicians rose significantly in the list, but the influence of certain parties' representatives were observed.

According to the head of Spinter Tyrimai, which performed the public opinion survey, Ignas Zokas, this list involves influence of several types – real decision makers, moral leaders and some politicians, who have clear charisma and image.

"The other changes are likely linked with greater or lesser activity in news media, increasingly active talks about the upcoming presidential elections are also leaving their mark," I. Zokas believes.

That said, the list might have also been adjusted by the famous Seimas National Security and Defence Committee (NSGK) investigation on business and politicians links. Vilnius University Institute of International Relations and Political Science (VU TSPMI) political scientist Mažvydas Jastramskis told Delfi that if the survey was run right now, the top 20 most influential would also include Lithuanian Farmer and Greens Union's (LVŽS) Vytautas Bakas.

"There was a dominant message and V. Bakas was at its centre. (...) He was perhaps less known, but is one of the main members of Saulius Skvernelis' entourage in the LVŽS roll. While he may not stand out as much as, say Agnė Širinskienė, his work is in an important committee, which I believe could have been worthy of a high place on the list. (...) V. Bakas should enter at least the top twenty," the political scientist believes.

Surprise in the top ten

One of the greatest surprises in the politicians' list is Prime Minister Saulius Skvernelis' loss of positions in the eyes of the public. While according to experts, S. Skvernelis should be in the top three of the most influential, the public believes that not only President Dalia Grybauskaitė is more influential than him, but also V. Adamkus and R. Karbauskis, who obtained significantly more votes this time.

"R. Karbauskis is an active politician, who makes real decisions nowadays and is often at the centre of various events. Specifically being at the centre of attention, expressing a fairly clear position and no doubt the position of the ruling party's leader quite clearly shows that this is the guy, who has real influence today. (...) S. Skvernelis also remains visible, holding nigh on the most important post in the country, but last year at the start of term he likely was only striving to establish himself in the public sphere as a new leader, prime minister. There is no more such demand today," sociologist I. Zokas believes.

"R. Karbauskis (...) politically is likely more influential because in essence he rules the party and it is more obedient to him than S. Skvernelis. S. Skvernelis in this case is even isolated from the party, especially given that he does not belong to it. This way he is dependent on the party himself, rather than controlling it. Whatever the case, if R. Karbauskis and his party turned away from S. Skvernelis, I do not know if S. Skvernelis would retain his post for long," the political scientist believes.

"But they nevertheless have no doubt that Karbauskis' influence is massive. Speaking in terms of percent, last year 48% of respondents gave Karbauskis their vote, while this year – 58%. Hence, 10% of the vote – such a growth is rather significant, you cannot deny it. And overall people agree that his influence is massive," G. Sarafinas said.

Also, according to him, elite respondents often spoke about how politicians make differing use of influence. Some for noble causes, others "sleazily" and "hard headedly".

"Speaking of the "Farmers", R. Karbauskis, A. Veryga and other people among the farmers, the term hard-headed is most suitable, they drive forward like a bulldozer. In other terms they achieve their aims, even if it is raining rocks, they do not care about the circumstances," G. Sarafinas believes.

L. Bielinis highlighted this difference between elite and public opinion. According to him, this difference shows that the public views leader, parties and influence based on completely different criteria than the elite or experts.

"For example it is very curious that based on expert ratings, A. Butkevičius is twenty-third, while the public gave him seventh place. However negatively or critically experts view him, however much they may criticise him, he remains popular among the public. There are two problems here: one is that experts in fact ignore the public's value orientation, while on the other hand the public is likely viewing politicians based on different criteria, populist orientation, where there is no longer any clarity or constructivity," the political scientist told Delfi.

Meanwhile, I. Zokas also highlights that people still view A. Butkevičius as an influential politician.

"A. Butkevičius' positions remain firm in the eyes of the people and sometimes the impression arises that this is a politician, who withdrew from active political life too quickly or simply "pushed" by circumstance, who still retains significant potential in voters' eyes. (...) Vilija Blinkevičiūtė retains the image of the good policewoman of politics and her high percentages are also no surprise," I. Zokas believes.

Both the elite and public opinion surveys featured politicians, who rose sharply over the year. One of these jumps was made by "Farmer" Agnė Širinskienė. She rose by an entire 36 places on the elite list and by 24 on the public opinion one.

"She is the "Farmers" face alongside Karbauskis. (...) On the other hand, she has positive traits, being hard working, continuing to work a dozen of hours a day, not counting hours, being a jurist and not being hot headed, but instead calm. People see her as a calm individual and see that she does not chase scandal, somewhat trusting her. Naturally, people believe that if she is allowed to often comment, if she appears on TV often, then she is also participating in decision making," G. Sarafinas believes.

According to L. Bielinis, A. Širinskienė's rise could also be linked with the perception of influence – the image has been created that she and R. Karbauskis control the entire party. Whether this is the case is hard to say, the scientist notes, however he believes that her influence certainly exists.

Another individual, who sharply rose in the public opinion list is Minister of Healthcare Aurelijus Veryga. He rose from 34th to 15th place (17 to 11 in the elite survey). I. Zokas believes that this occurred because A. Veryga is the minister, whose decisions were felt by all citizens.

"Even if we completely abstain from alcohol, we will still have an opinion on this politician's decisions. Whether we want it or not, alcohol is a significant factor of public life. It isn't without reason that it is granted so much attention in the nation's folklore. The minister has touched a sensitive area and this is talking not just about degrees, alcohol prevention or excises. This is far wider and deeper," the sociologist believes.

L. Bielinis highlights that V. Matijošaitis in his role as Kaunas mayor appears very strong and it is clear that his image is greatly influenced by the changes ongoing in the city. He believes that the Kaunas mayor's rating will continue to rise, regardless of whether he strives to actively participate in political life.

V. Matijošaitis' rising influence was also noted by the public – he rose from 13th to 9th place. According to I. Zokas, the Kaunas mayor's strengthened positions were viewed in the context of the "working person" – if real changes and works are done alongside a politician, this person must be influential.

"Furthermore, his valuation is likely also influenced by musings on potential participation in the presidential elections, this way sympathies for him are spreading well beyond the boundaries of Kaunas city," I. Zokas states.

Bad news for the Social Democrats and Liberals

"First of all – people's discontent in the governance of Vilnius is rising. Second – all the unending stories for the Liberals. Due to all of them, their ratings are dropping. (...) The fractured Social Democrats are in no better position, starting with A. Butkevičius, ending with Gintautas Paluckas, their influence is declining compared to last year," the chief editor of Reitingai said.

"Their schism, inability to come to terms and re-join into a single party is their problem and a factor, which could lead to both parties losing the elections. That we see a slight rise of Social Democrat ratings compared to Social Democrat Labour, this means nothing. There is no victory yet and it is all fleeting. In fact, the Social Democrats are greatly losing positions and could yield the entire left wing to some other political party, take even the "Farmers" for example," the political scientist explains.

G. Sarafinas also noted that Seimas Speaker Viktoras Pranckietis is also losing his influence. According to him, this can also be seen in other recent research. The public opinion survey shows this the most – V. Pranckietis has dropped from 8th to 17th.