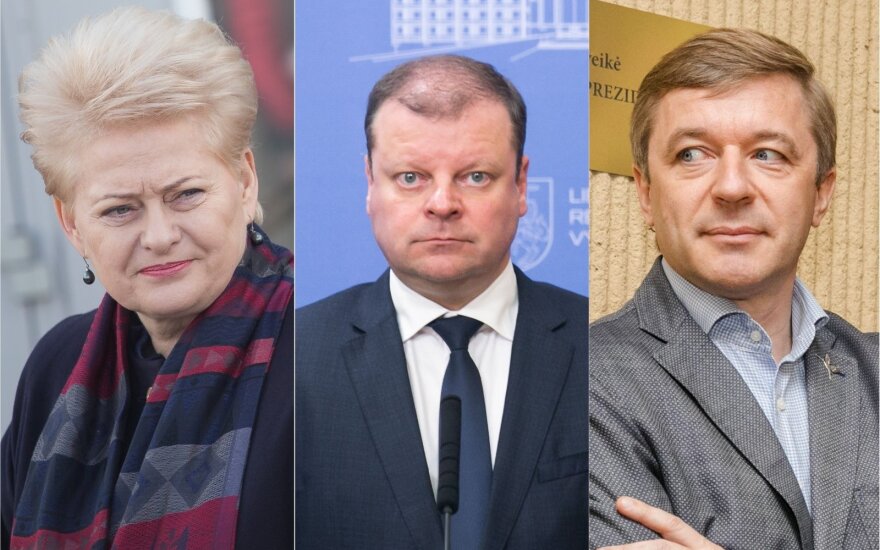 President Dalia Grybauskaitė, Prime Minister Saulius Skvernelis and Lithuanian Farmer and Greens Union chairman Ramūnas Karbauskis. They are the three most influential Lithuanian politicians. Both the country's elites and public agree on this trio.

With the first part of the project we present the most influential politicians in Lithuania. This year holds much intrigue – Gabrielius Landsbergis has surpassed his grandfather Vytautas Landsbergis in the public's eyes, while Remigijus Šimašius is seen as more influential than Visvaldas Matijošaitis by the public.

Based on a survey of the country's elite performed by the journal Reitingai, for the third year in a row President Grybauskaitė remains the most influential politician in the country. Mid-way through her second term, D. Grybauskaitė has maintained first place in surveys and ratings of public opinion.

Up fourth is former Supreme Council chairman, the first factual leader of independent Lithuania V. Landsbergis. In fifth place we find former President Valdas Adamkus, who no longer participates in politics. In sixth, up from eleventh place last year, we find G. Landsbergis, the leader of the Homeland Union – Lithuanian Christian Democrats.

Compared to last year's survey, the top ten no longer features former PM Algirdas Butkevičius. Having been second last year, following the loss of the posts of Prime Minister and party chairman, he takes 15th place this year.

The respondents also mentioned several influential individuals who did not make it into the list. These include late former President Algirdas Brazauskas, members of Seimas Vytautas Juozapaitis and Asta Kubilienė, as well as the prefect of the Seimas Social Democrat group Andrius Palionis.

It is curious that the top three politicians matched in the surveys of the public opinion and elite.

"We can see that if a person does not have an office, they climb the ladder of influence particularly slowly. The people we did not see last year received the posts of ministers, vice minister or high posts in Seimas, shooting up immediately," Gintaras Sarafinas, the chief editor of the journal Reitingai which conducted the survey, said.

At the same time he is puzzled by the low vote count received by the ministers of S. Skvernelis' cabinet. G. Sarafinas observes that this year A. Butkevičius and his cabinet's ratings took a dive.

The expert also commented on certain tendencies in the voting. He explains that there are politicans such as Minister of Foreign Affairs Linkevičius, who have vast influence and are popularly voted for by representatives of various political parties and apolitical people, while there are also other cases such as V. Adamkus, who may have hard to observe influence and little public visibility, but receive votes out of inertia, being seen as an authority in the people's eyes.

"Meanwhile the others receive votes from their party members. If they can give five votes for politicians, they will definitely vote for fellow party members. If this was once done by the Order and Justice, as well as the Labour Party, now it is done by the "Farmers". Nothing new in our country, just the street sign changed, it is a new party, but once again acts similarly. Perhaps people think they have to repay those that helped them enter politics and vote respectively," the chief editor of Reitingai mused.

"The first positions were likely easily predicted – the leaders of the country and the chairman of the leading party are seen as those with the most influence. V. Adamkus and V. Landsbergis' high rankings are also unsurprising – these are significant moral authorities for a large portion of Lithuanian citizens," public opinion and market research company Spinter Tyrimai head Ignas Zokas commented.

He was somewhat surprised by the especially high position granted to A. Butkevičius by the public. The politician currently holds no significant post, but was voted in to seventh place.

"If we look at it in the light of a clash between party veterans and the new party leader, we can clearly see that Gintautas Paluckas still has much work ahead of him in raising his political weight in the public's eyes. Based on the perceived influence of politicians, he is playing in a completely different weight category to A. Butkevičius or the ever popular V. Blinkevičiūtė.

On the other side of the ideological barricades, in the Conservative camp, the young leader G. Landsbergis has been more successful in establishing his positions and that he, at least symbolically, exceeded his legendary grandfather by one position can be seen as a sign of establishing acknowledgement," I. Zokas said.

"It is somewhat unpleasant to find almost the entire ministerial cabinet at the bottom of the list. I definitely do not believe that the public do not understand the importance or weight of the ministers, just that most of the names, compared to old political heavyweights, are still too "fresh" and if this cabinet lasts, I have almost no doubt that next year its members will take far more respectable places on the list," I. Zokas predicted.

MEP Viktor Uspaskich , the founder of the Labor Party, has announced plans of returning to the party...